6 reasons Battle: Los Angeles could be the next Aliens

Now we're not saying this new movie could be BETTER than Aliens. That's crazy talk. James Cameron's space war epic is the ultimate alien battle movie. But it couldn't hurt to have another one to watch, like if your Aliens DVD gets stuck in the player or something. What Battle: Los Angeles is starting to sound like is the next great alien battle movie.

Aaron Eckhart plays a marine squad leader leading troops against the invaders on the streets of L.A., Michelle Rodriguez plays an air force tech sergeant and Jonathan Liebesman directs the action. We got to talk to the director and stars in a press conference while they were at San Diego Comic Con, and got a little one-on-one time with Eckhart, too.

About two minutes into the conference, they started saying things that make this movie sound like the next Aliens. At the very least, Battle: Los Angeles is now on our radar until it opens in March.

These aliens are organized

If you think Battle: Los Angeles's aliens look as freaky as H.R. Giger's, that's already a big deal. But imagine if aliens even have ranks and military structures just like the human army.

"It was important to make aliens really feel alien, seeing something you couldn't identify and was scary and making that an army," Liebesman said in the press conference. "There were medics, generals. We wanted to make an urban combat movie and your enemy needs to feel like a real army. We wanted to have aliens that hearken back to something you thought you'd see at Roswell but had a militaristic and believably militaristic vibe."

We know Michelle Rodriguez can kick ass, and she does again as an Air Force Tech Sergeant. She's actually the brains of the tactics against the aliens.

"I was more like a delegate kind of intel persona in the film," Rodriguez said. "I thought that was really cool where I'm more being forced to use this physical capability that come out of instinct and wanting to survive a hostile situation. It was a breath of fresh air. I do get to kick some ass in a geeky way, as geeky as I can get. It doesn't get geekier than that unless you're home with my playing Dungeons and Dragons."

The marines suit up with all the real gear

It was cool to see James Cameron's marines blast away at those aliens. If you've seen the weapons modern day marines carry into combat, they could do some damage to alien visitors without making up technology.

"Obviously you've got your Kevlar and every marine configures their jacket differently," Eckhart told us in our exclusive interview. "So it's how you hold your weapon, how you configure it, where you put your grenades, your ammo, your empties. You have your first aid. Some guys had a shovel. Some guys had an axe. We're all using different sort of weaponry. So you configure it and that was the great thing about boot camp. We learned where we wanted things. Your knife's here, you're grabbing for this. I had a pistol on my hip, I had my M4, I had a different sling than other people so you get to individualize it and it makes you feel like you're invested more in the film and your character."

In real life that takes hours to assemble, but Eckhart had prop masters helping him get suited up by call time. 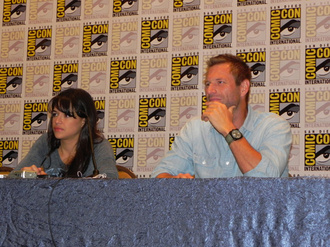 With all the disaster movies that came out in the last 20 years, there's no monument or landmark we haven't seen blow up. Liebesman had the idea to destroy L.A.'s infrastructure.

"What I think is a little different about this movie is we didn't go after huge landmarks," Liebesman said during the press conference. "We went after Los Angeles as a city. Maybe it's because I'm from South Africa and I don't know about the sights, it's about the freeways. Aliens wouldn't open Wikipedia and look up the Hollywood sign. What I like about the film is they destroy Los Angeles as a city. That's how I think it would really go down if it happened."

This is the battle America needs to unite us

Times are tough. There are red states and blue states, wars abroad and political pundits on TV. It might take something as big as an alien invasion to bring us all together.

"There's a definite feeling, at least I have, of a loss of security in many ways, just from what's happening in the world like you said, economically or even physically," Liebesman said during the press conference. "I think aliens represent easily something physical you cannot overcome. It's always easy to identify with characters who have to beat that antagonistic force. The time is right for these types of very black and white, good versus evil movies and I think that's why you see comic book movies are big now. I think there's a lot of insecurity over the last decade for obvious reasons. I think that's why people enjoy seeing it in such a clear cut way."

It's got a better twist than Signs

Spoiler alert if you're still waiting to see M. Night Shyamalan's 2002 alien invasion movie. For everyone else who called B.S. when water proved to be the aliens' weakness, Battle: Los Angeles takes the opposite approach.

"What happens is Earth is 70% water," Liebesman said in the press conference. "The aliens in our movie use water for many different things so it's for those natural resources."

Take that M. Night. These aliens WANT our water.