6 reasons tonight's episode of The Event is worth watching

Wow! Miss a week of NBC's The Event thanks to a pre-emption and it feels like it's been weeks and the show has vanished into a rabbit hole! Well, fortunately for followers of The Event, we can look forward to four new episodes this month.

Star Laura Innes and executive producer Evan Katz gave us the inside scoop about what's ahead. Here's six reasons to return to The Event's fold, or perhaps check it out if you've never seen it, beginning tonight at 9 p.m. ET.

Tonight we'll discover where Sophia and Thomas went and a bunch of other stuff.

When last we left the characters in The Event, Sean and Leila finally met a woman who could connect the dots to the aliens, and Sophia and Thomas vanished into a whirlpool sort of Stargate thingie ... and a building fell on Simon.

So where did Sophia and Thomas go in episode six, "Loyalty"? Down "a little rabbit hole," said Innes, who plays Sophia. "Well, the plot thickens, as they say. [In tonight's episode, 'I Know Who You Are,' it] was the first episode where I feel like she's gotten to kind of bust out a little bit, and Evan and the gang gave her a great scene with the character of Thomas, and you start to see her really express her real feelings. So, that was fun to do. It's fun for her to be out. It's fun for me to be able to wear different outfits. That's always nice."

As for what else is ahead, "Blake Sterling gets the same treatment that Simon Lee got the last original airing. So you know, we're going to use [the flashbacks] really to enhance character ... but we're not religiously slaving to a certain number of flashbacks in every episode in multiple storylines," said Katz. "Flashbacks in more than one storyline, I think, was frustrating."

It's about time Željko Ivanek, who often plays a heavy, will get some meaty flashbacks as Blake Sterling, the director of national intelligence, who had no trouble keeping secrets from the president.

As for Sean and Lelia, they'll learn more from Madeline (Paula Malcomson), the lady they confronted at gunpoint in Lelia's house. And we'll discover Simon's fate. 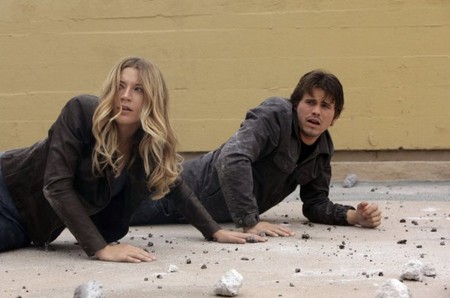 You'll find out who Thomas is to Sophia.

We've come to see the aliens (if indeed they are aliens) in a different way after Thomas' terrorism proved that not all of them are willing to take the high road with Sophia.

In tonight's episode, "and then again in episode nine, that relationship is explored very deeply. And it's been wonderful to play with Clifton Collins, and to try to navigate those characters," said Innes.

"Sophia has a priority beyond her relationship with any one person, even Thomas, who she has this very intensely close relationship with. So certainly he pushes the boundaries of her negotiation skills, her morality, her emotions, and it makes for a very rich acting experience," she said.

Thomas is "sort of the antithesis of her. He's a rogue. He's a loose cannon. Whatever you want to call it. And as the episodes go on, you begin to learn more about their relationship, and it's pretty ... I mean for me, it was very interesting. It's very layered. It's very ... it's full of contradiction," said Innes.

We'll see Sophia in her role as a leader.

In the next couple of episodes "you're going to learn what her true relationship with Thomas is, what her real priorities are now that she's out, and a little bit more about the structure and challenges to her leadership," he said. 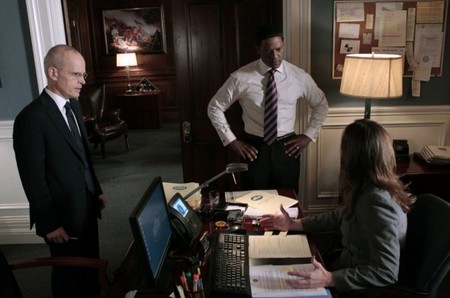 The Event's future is not set.

Katz promises the writers know where The Event is headed, but that doesn't mean there won't be surprises, even for the writers, ahead.

"We have a larger roadmap. We know where we want to end. We have a couple of benchmarks that we want to hit along the way. But you know ... as we do episodes, we make sure we leave room for us to discover the story on its own and evolve what we discover about the stories and about the actors," said Katz.

As far as who the aliens really are...

So far the detainees and their people have been called aliens. But are they really aliens? And if so, why are they on Earth and being all secretive? There are many fan theories. Katz says we'll get answers.

"I would say there is a big surprise coming about who they really are. But I don't think anyone's really hit on it yet, exactly anyway."

As far as what the Event really is ...

Initially there were plans for one event. But things have changed on the series since Katz, who comes from Fox's 24, joined the show after the pilot.

One of the few people who knows what the event actually is is Innes. Well, at least she used to know. "I know what the event was. I don't even know if that's different, frankly. And I mean, I'm certain that things are different, because when Evan came on and when the show became a reality, my suspicion is that things shifted and moved, and the timetable shifted in terms of when these things happen. And we moved from this idea that there was one event that everyone had to wait five years to find out what it is, to every season ending with an event that impacts the future of the show and it breaks off in different ways," she said.

"Well, the show's designed so that every season ends with a big event. So I can say that there's a tremendously big event at the end of season one," confirmed Katz.

And luckily, since NBC gave The Event its back-nine episode order, we'll get 22 episodes. So that means a full season and a look at what that "event," at least this year's event, really is.

Are you ready to follow The Event down that rabbit hole or not?