One of the things I love about Comic-Con happens long after Hall H has emptied and the cosplayers have disrobed. Days later, when I've re-emerged from the come-down, I go through all the random crap I grabbed on impulse and discover a few nuggets of geek gold.

The perfect example: The preview of Babylon Confidential: A Memoir of Love, Sex & Addiction, a tell-all by Claudia Christian, aka Cmdr. Susan Ivanova from Babylon 5. It's a slim, comic-book-sized collection of excerpts, with a glossy portrait of Christians looking, IMO, unfortunately soap-operatic. I didn't think much of it when her promoters were handing it out to all the geeks in line for a solo panel with Babylon creator J. Michael Straczynski.

Imagine a world with millions of telepaths. J. Michael Straczynski did, and wrote a comic about it
The quick hack guide to watching only the best of Babylon 5 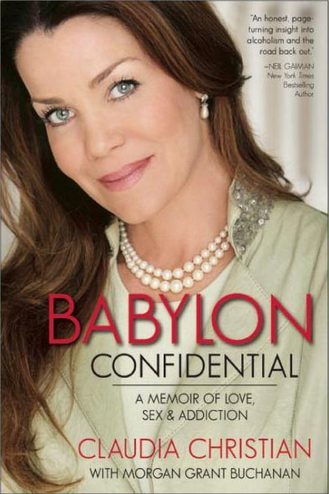 Serves me right for judging a book by its cover. It was actually kind of cheeky for her to jump in on JMS' fandom right before his big announcement, considering the tale she reveals about the writer.

The book comes out in November 2012, but in the meantime, here are a few juicy details from the teaser.

In the first lines of the introduction, Christian starts naming names, but she is also stingy with the juicy details, hinting that she's going to spill it later in the book. Among her make-out partners: actors George Clooney and Rob Lowe, Egyptian film producer Dodi Fayed (better known as Princess Diana's lover, who also died in the car wreck) and ... model and Weird Science bombshell Kelly LeBrock.

Christian mentions that she rejected Willian Shatner's advances, but the story behind that isn't included among the preview excerpts. However, she goes into great detail about her most awkward date ever with Straczynski.

Christian says she had just emerged from a breakup when Straczynski started singling her out for private meetings in his office. One day he invited her to see a show with him.

But maybe it wasn't. Maybe Joe was just being nice. I went out to meet him, and when I saw the black stretch limo pull up any doubts I'd harbored were washed away.

I was more than a little freaked out. ...

It was clearly an uncomfortable evening for both of us. When he dropped me off back at home I quickly thanked him and closed the door to the limo before he had time to move in for anything physical.

Their friendship was never the same again, she says.

There was a lot of contention over season five of Babylon 5, Christian remembers, because the decision to renew had come so slate and many of the actors, herself included, had already made plans for other productions.

In one passage, she explains that while the cast was in the U.K. for a convention, the studio guys turned up, got them drunk on wine and nice scotch, then started making the rounds of the hotel rooms at about 3 a.m. to pressure the actors to sign contracts. Christian called her manager, who flipped out.

I packed my bags and left the UK. The deadline passed, and by the time I got home there was a fax waiting for me telling me that I was fired from the show. My manager contacted them to see if we could salvage the situation. The producer's reply was that we were "a day later and a dollar short."

Christian is clearly still bitter about one of the season-five episodes where Ellison wrote in a line in one script that implied that Cmdr. Ivanova left the station for a job with better pay.

"I think it was a personal jab at me, and I think it was in poor taste," Christian writes. "Ivanova and I have one more thing in common: Neither of us is so career-oriented that we would choose wealth and advancement over personal loyalties."

Christian was almost Seven of Nine

She read for the Star Trek: Voyager role that ultimately went to Jeri Ryan. That is all.

Remember that time Christian was shot by a fan in a tribble costume?

I didn't either, but Christian won't forget it, and she recounts the story hilariously. It starts with a postal-worker fan who kept sending her doilies, tea cozies and other knitted items. Then he showed up at a convention in upstate New York and handed her a hideous hot-pink, lime-green and purple afghan. She pretended to like it.

I could tell the giant tribble was pleased. I could hear him purring inside the suit. He waddled off, but not before promising to deliver another gift later in the day.

I was expecting a Day-glo coat the size of Rhode Island or a scarf long enough to span the English Channel, so was I in for a surprise when, about an hour later, another giant tribble came lumbering towards me. It was the same guy, but the costume had been modified. Wires stuck out its head, dozens of red lights flashed around its furry body. This was clearly a scary tribble, a tribble with unfinished business.

"I am a morphed tribble. Now you will be morphed too."

And then a gun emerged from the mass of fur and he shot me. I felt the bullet hit me in the ribs, and I fell back, clutching my side. My life didn't flash before my eyes, but the next day's headline did-- "Death by Irony! Babylon 5 Star Shot By Sci-Fi Alien."

The bullet turned out to be a blank and she survived. Ten years later, the same stalker turned up at another convention and barely remembered the incident.