From the novel by Stephen King comes the new series, Haven. Wait, Stephen King didn't write a book called Haven. His book was called The Colorado Kid, and that became Syfy's new series. More on The Colorado Kid in a bit. Haven is about FBI agent Audrey Parker (Emily Rose) investigating the town of Haven, Maine. She discovers Haven is a place where people can keep their supernatural powers from acting up. That is, of course, until they start going supernatural anyway.

Emily Rose, her costar Lucas Bryant and series co-creators producers Sam Ernst and Jim Dunn gave a conference call with the media about the new series. They revealed six Stephen King connections that make Haven more than just your average "magical power" show. Find out what you're in for when Haven premieres this Friday, July 9 at 10/9c on Syfy.

Get ready for Evil Audrey: Everything we know about season five of Syfy's Haven
Emily Rose: Jason Priestley was 'not a diva at all' on Syfy's Haven

It's already based on a disturbing book

Stephen King's novel deals solely with a single unidentified body and the unanswered questions it raises. Even before the series lined up 13 more weekly mysteries, The Colorado Kid freaked out its star. "Actually, when I read The Colorado Kid initially I had a very strong reaction to it," Rose said. "I sort of threw it across the room and was like, 'What? What the heck?' And then I picked it back up, and Stephen King so wonderfully in his Afterword sort of nurses you through it and kind of helps you digest it. This Colorado Kid mystery is a mystery and it's not tidy at the end. It's not a tied up bow, it's not kind of like, 'And this is what has happened exactly to a T.' It's more like, 'Well yeah, that was weird.' It's that initial reaction of being like, 'What? I want to know what happened.'"

It's bigger than even Stephen King imagined

Stephen King writes long books, but he left The Colorado Kid short (for him) at 184 pages. More like a Shawshank Redemption than It or The Stand. So the series creators came up with a lot more story to tell. "We have two elements to the show," Ernst said. "One is we are going to meet in each episode a supernaturally afflicted person like we did in the pilot and so we'll tell that story. Every week there will be a new person. People can jump in Episode 6 or Episode 16 or wherever they come in and they'll be able to enjoy it. However, there is a mythology to the show. We actually know the last scene of the series, whether that's Episode 25 or 75. We know that scene, so we know exactly where we're going and we're going to unfold that. Each episode will be stringing along to sort of talk about the story of Audrey and Nathan and the town of Haven and where it's going. "

Real life in Haven is scarier than the super powers

Haven takes the concept of this town and its mysteries to a supernatural level. Like Stephen King, the supernatural part isn't really what's scary. It's how real people act around it that's scary. "There are two sides to Stephen King," Ernst said. "There's the creepy crawly and then there's all the cool character real world of people's lives who suddenly go sideways on them. That's what he does to us. That's our favorite part of Stephen King. This show is about people's lives going sideways after something supernatural happens to them. What we're really excited about is tracking Audrey and Nathan and hanging out with them as they try to help these people deal with these things. Sometimes they help them deal with in very positive ways and sometimes things go horribly awry."

Okay, that's a tagline from Jaws: The Revenge but it's true of Stephen King too. Carrie burning her school bullies alive. Paul Sheldon's number one fan putting him through Misery. Audrey's going to find out she has a personal connection to Haven herself. "She kind of comes to grips with there might be some kind of link to her past and her family and her roots," Rose said. "I think that as kind of those start unfolding in the story, it will kind of start tripping Audrey out and tripping her up at times. I think she's so used to sort of having this kind of defense and that she knows how to operate and she knows how to do her work and her day-to-day, but the personal and the emotional sort of things that she has to face, she'd rather not. So I think that's going to be her sort of blind spot."

Stephen King's publisher is writing an episode himself 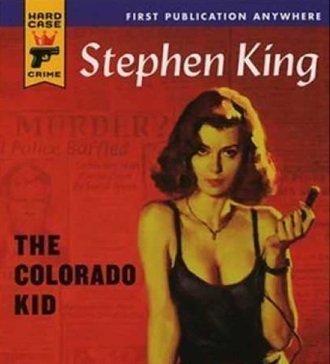 Stephen King wrote one story that inspired the whole series. Now his boss is writing for the show. "Charles Ardai, who is the publisher of The Colorado Kid and pretty tight with Mr. King, is actually writing at least one if not more of the episodes this season," Ernst said. "He was the publisher of Hard Case Crime [label] that The Colorado Kid was published under and is an author in his own right." Maybe Ardai can talk King into adding to the legend himself. "I know that King has seen the pilot, he's been involved in everything and believe me, please, we would love to have Stephen King come in."

Anything can change: the words, the weather... anything!

Stephen King stories can change on a dime. A plague story becomes an epic battle against evil. An alien invasion bursts out with sh*t weasels! Well, there are no sh*t weasels in Haven, but nothing is predictable. "We started shooting in April," Bryant shared. "So in the scene in the pilot where Emily and I first meet each other, shooting that scene we were outside, it started off on a beautiful day and then it was black clouds and then it was pouring rain. Then we had hail and two rainbows by the end of the day. It was all in the same scene. So we just quickly got used to that being the status quo."

Ernst also likes to play with the scripts so the actors don't always know what to expect. "I write it with 20 or 25 words and then my challenge is to get it down to three," Ernst said. "That's great to watch him struggle to get all that information out in three words. With Emily, I try to as often as possible get her to take a left turn in the middle of the conversation that nobody is expecting and say it out loud and surprise Lucas with that. That's our goal."