One of the big mysteries that has kept us hanging for much of Fringe's offseason is where, exactly, is Olivia (Anna Torv) in the Observer-occupied world of the future. Now we have our answer.

TV Line has released seven new pics from season five of the beloved Fox series, and one in particular provides an apparent answer to Olivia's whereabouts. So why didn't she pop up in the future-set season-four episode "Letters of Transit"?

How The Last Man on Earth was supposed to end, according to Will Forte
Yabba Dabba Doo! Fox developing adult 'Flintstones' animated series starring Elizabeth Banks as grown-up Pebbles

Because she is apparently still encased in amber: 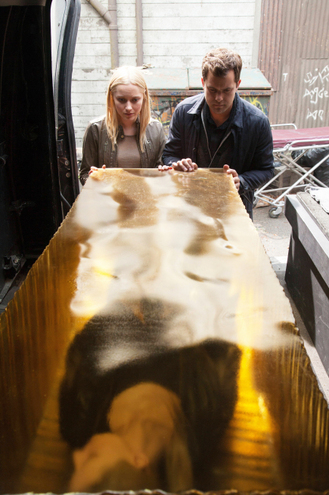 Unless this shot is a red herring, it at least puts to bed the theory that Olivia wasn't ambered, and will show up as on old woman in season five (or even be dead). We can't get a good look at her, but she definitely looks like young, regular ol' Olivia.

But just because the gang is all there, it doesn't mean things are going to go smoothly. Fringe showrunner Joel Wyman recently offered a hint that Peter and Olivia's relationship may have fallen on the rocks in the near future, and those issues will linger once everyone wakes up:

"They had their daughter taken from them [by Observers]. And most couples, when they lose a child... don't make it through that. So what happened to Peter and Olivia before the ambering?"

Thankfully, we only have to wait until Sept. 28 to find out.

In the meantime, check out the other six new promo shots below and let us know what you think about Olivia's fate: