70+ years of Dark Knight history in one massive Batman infographic

Bruce Wayne's alter ego Batman has been kicking around for more than 70 years, and during that time there have been a lot of incarnations of the Dark Knight and his rogues gallery. Want to take a walk down memory lane?

This massive infographic breaks down more than half a dozen Batmen, as well as the Joker, Catwoman, Commissioner Gordon, Two-Face and a few other supporting players.

A timeline of significant Bat-events is also included, marking important dates from the comic, the animated series and the long-running film franchises.

With Christopher Nolan's acclaimed trilogy officially over, it's nice to look back and remember just how many times these characters have been reimagined over the years. There's always a new version waiting in the wings.

Check out the infographic below, and let us know what you think: 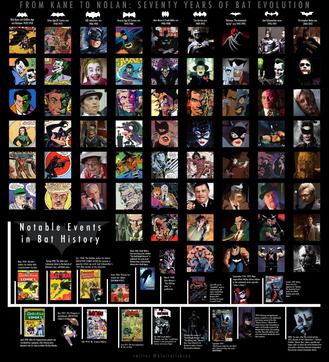