The folks at Live for Films have posted a batch of new images from Entertainment Weekly's feature on Joe Johnston's upcoming Captain America: The First Avenger ... including one of Cap's nemesis, Red Skull!

Aside from the obligatory shirtless shot of Chris Evans as a buffed-out Steve Rogers (aka Captain America), we have: Hayley Atwell giving off a definite Diana Prince vibe as Peggy Carter; Evans sporting the old-skool Cap shield of the World War II era, Jack Kirby vintage; some nasty-looking submarine hardware, and a shot of Hugo Weaving, recently seen in Johnston's The Wolfman, looking every inch the villain decked out as a pre-deformity Red Skull, Johann Schmidt!

More teasers are sure to come, but these sure do whet the appetite of even the most casual comic-book nerd. 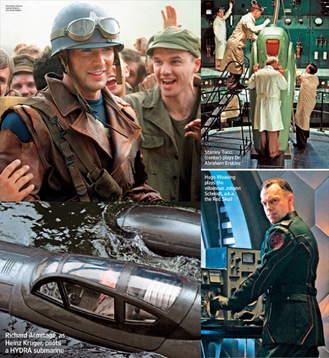 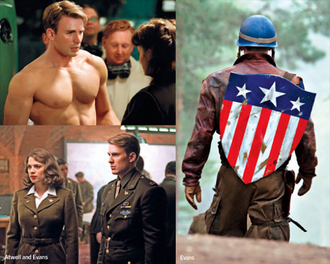 Captain America: The First Avenger is scheduled to open July 22, 2011.