7 reasons why V should get a third season

I'm not going to lie. ABC's V has been frustrating to watch, because while I love parts of it, some of the characters and the decisions they've made have driven me crazy. So imagine my surprise when I watched the season-two finale, "Mother's Day," last night and got excited by the possibility of a third season. (Beware—there are SPOILERS AHEAD.)

V is definitely on the bubble when it comes to a possible renewal, averaging a rating of 1.9 in adults 18-49 with over 5 million total viewers, which makes it "more likely to be cancelled than renewed," according to tvbythenumbers.com. That's less than the 2.2 rating it got during season one, which earned it a second season. So things are not looking great for the alien invasion series.

However, the exciting game-changing season finale has me unexpectantly rooting for this series to be renewed, and here's seven reasons why. (Did we say there were SPOILERS AHEAD?) 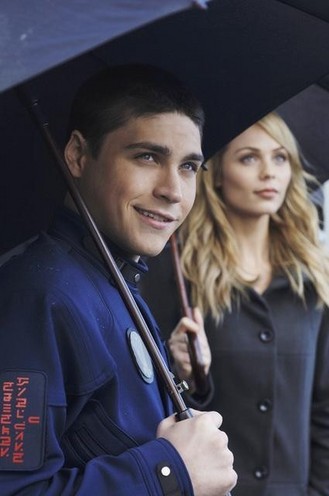 I don't think there's any character I hated more on any show this season than Tyler. He was an annoying spoiled brat and totally unworthy of having Erica has his mother.

Part of the blame lies with the writers who had Tyler make very bad decisions most of the time. While a boy like Tyler would certainly be enamored of a pretty V like Lisa, he was so unlikable and wishy-washy there's no reason why Lisa would have fallen for him. And when he blamed his mother, who he believed had been kidnapped by the Fifth Column, for his father's death and ran off to the Vs, his character became so unredeemable that I was thrilled to see fake-Lisa take a bite out of him after they mated.

While it'd be nice to blame all of the problems with the Tyler character on the writers—and they certainly deserve a fair amount of the blame—the bigger problem stood with actor Logan Huffman. He was over his head when it came to being in a cast filled with outstanding actors like Elizabeth Mitchell as Erica, Morena Baccarin as Anna and Joel Gretsch as Father Jack. Even though it's not fair to compare the less experienced Huffman with the likes of Mitchell and Baccarin, his presence hurt the series and V will be far better without him.

And speaking of killing off characters ... 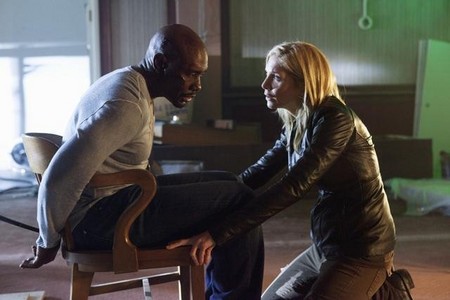 The other major character who definitely needed to be killed off was Morris Chestnut's Ryan Nichols, and that happened (at least I hope it happened) when his own daughter, Amy, wrapped her tail around his neck and snapped it. Now, I'm a big fan of Chestnut, and he certainly can't be blamed for how weak his character ended up being, but Ryan's time had come.

His character never made much sense. If you had an alien from an invading force on your side, wouldn't you quiz him on all things V?

I once asked executive producer Scott Rosenbaum why Ryan didn't tell Erica where he was from and give her more information, and he said, "Well, the thing is, Ryan was born via egg on a ship. So he doesn't know any of that." He went on to say that Ryan wouldn't have a lot of information because the Vs worked in cells. "Each V is only given information on a need-to-know basis."

I'm willing to buy that, but not that he wouldn't have filled them in from the beginning about what he does know about being a V, what is the best way to kill a V (which he finally did when they were plotting to assassinate Anna) or what the Vs actually look like. But then Ryan started making bad decisions and he eventually sold out his Fifth Column conspirators when it came to the plot to assassinate Anna because his daughter was in pain (which he knew Anna was responsible for). There's no way Ryan wouldn't know that Amy would be better off with either Diana or Lisa as the V queen, and she could get bliss from them. I didn't buy his betrayal for a second.

However, when it comes to killing off Diana, I'm a little sad to see her go. Jane Badler's Diana was an asset to the series, and it was terrific to have Anna go up against someone who she was a little scared of. That said, Diana's death led to the best line of the season when Anna turned to Lisa and said, "Now that's how you kill your mother." That moment rocked.

Anna is an awesome villain 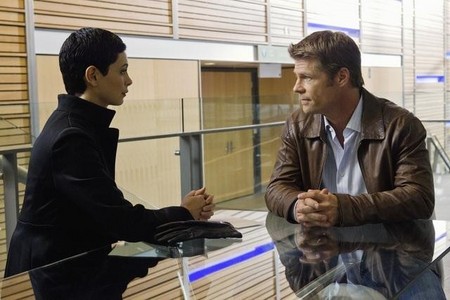 While there wasn't a chance that Anna would get taken out in the finale, since the series is certainly based on things going down to the bitter end between Anna and Erica, seeing her face betrayal at Lisa's hands and utilizing human emotion to save herself was priceless.

Anna took the betrayal and spat it out, taking Diana and Lisa down, while strengthening her position. She gave the humans bliss with Amy's help, which will ensure her eventual control over the human race.

What worked out so well this season is that we finally know what Anna wants from the humans. As a race, the Visitors' future is at stake. While we don't know why that's the case, fake-Lisa and Tyler's offspring will be hybrids, and once those hybrids hatch, things are sure to get very interesting for the humans.

Anna met every challenge from the Fifth Column (be they V or human) and came out on top all season long. Baccarin's Anna has become a truly fascinating character, and I'd love to see her battles with Erica intensify, especially if they can get more screen time together.

Erica is an equally awesome hero 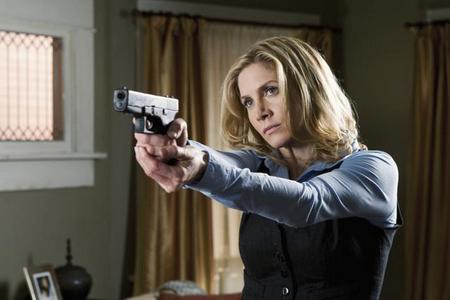 Elizabeth Mitchell is great as Erica, and she's able to sell whatever storyline the writers manage to cook up, regardless of whether those stories made sense. When Anna ordered that Tyler's father, Joe Evans (Nicholas Lea), be tricked into trying to save Erica, after she was supposedly captured by the Fifth Column by sneaking past a horde of FBI agents, and he was eventually shot dead in a hail of gunfire, Erica's heartbreak made it impossible not to be moved. And then when Tyler blamed her for his dad's death and left to go to the V ship, again, her pain was so real I almost forgot all about the silly plot stuff.

Erica has been so kick-ass this year, imagine what she'll be like when she finds out Tyler is dead and that she's going to be a grandmother along side Anna. Think about the possibilities! Family dinners might have a whole new meaning. 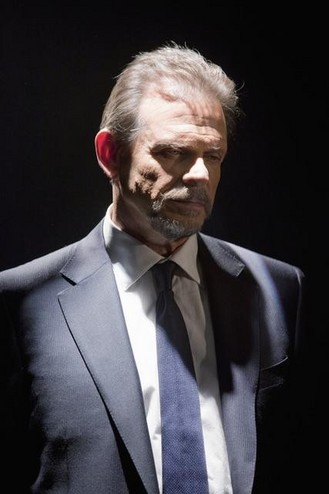 While the Fifth Column took a major hit and seemed to be decimated, humanity's hope popped up in the form of the military- and government-run Project Aries, which is led by Lars Tremont (played by Marc Singer, who starred in the original V). Luckily, the human race's hopes don't only rest on the shoulders of Erica and her ragtag group of freedom fighters anymore.

In truth, when it comes to the Fifth Column, Erica, Diana and the others kind of got what they deserved. Basing all their hopes on Lisa killing her mom was a bad idea. While Lisa had certainly plotted against Anna, pulling the trigger was a whole different story. I wasn't surprised. Were you?

So it's good to see some new resistance blood in the form of a bigger operation with Project Aries. And it's even better to see Singer at the helm and Erica's FBI buddies joining forces with her. 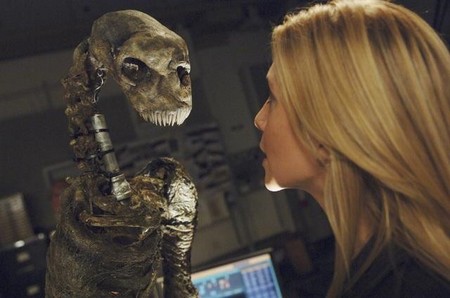 All season long, I've been waiting to see what the Vs look like, and we FINALLY got to see the new V queen hatch. It was a cool, if a far too long-awaited moment. Now if only we knew why the Vs have such issues with being skinned.

If there is another season, everything will change 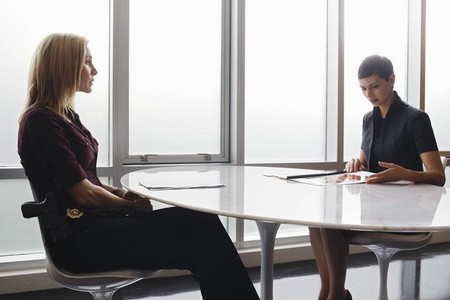 While the whole focus on Anna trying to find and remove the human soul was ... well ... stupid, that issue seems to be set aside for other more interesting developments. The members of the Fifth Column took a major hit with Lisa's failure to kill Anna, Anna discovered Chad Decker was involved in Lisa's fake kidnapping, the new queen egg hatched with a V whose skin looks exactly like Lisa, Tyler was killed, Diana was murdered by Anna and the Vs accepted Anna again as their queen, Ryan was killed by his daughter, Lisa was imprisoned in her grandmother's dungeon, Erica learned of Project Aries, Hobbes vanished and, most importantly, Anna used Amy to bliss humanity and the motherships began to move.

While it would be nice to hope the writers would do a little better job if a third season happens, at least the series would go forth with its best characters and ridding itself of storylines that didn't work very well. So I have hope.

When V is good, it's very good. At the end of "Mother's Day," a devastated Erica holds a blissed Father Jack, and it was heart-wrenching. The finale was a very eventful, well-written hour of television, and because of it, if we do get a third season, V will change forever in what I can only hope will be a very good way.

What do you think? Should V get a third season?