Watchmen, The Lord of the Rings: These are books that were commonly thought to be impossible to adapt to the big screen. That is, until a filmmaker such as Zack Snyder or Peter Jackson found the keys to unlock them.

Whatever you may think of the final results, the fact is that Snyder and Jackson succeeded in translating the books to film. And that got us thinking about other great works of SF literature that are supposedly unfilmable—and how they might be successfully adapted, and by whom.

It's a heady list. The following novels have captured the imaginations of generations of readers, but have so far been given a wide berth by filmmakers. We examine what makes these greats hard to shoot, and who out there in the dream factory actually has the kind of (dare we say it?) Snyder-ian vision to get the job done. 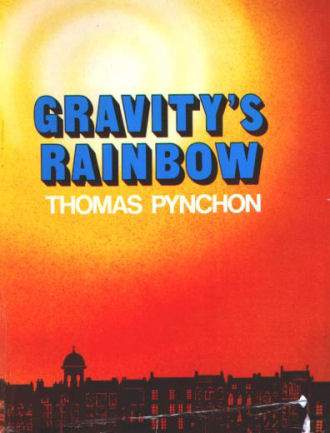 Why It's Great: An undisputed classic of science fiction, Gravity's Rainbow tells a sprawling, complex and convoluted story about the quest by several characters to uncover the mystery of a secret device to be installed in German V-2 rockets at the end of World War II.

Why It Can't Be Filmed: Any attempt to winnow the plot of Gravity's Rainbow down to feature-film length would not do justice to it. The book features a maddeningly digressive narrative structure, goes into minute detail about the most obscure aspects of history and technology and delights in the depravity of its characters.

Who Could Do It: Charlie Kaufman. He famously took a previously unfilmable book, The Orchid Thief, and made it work as a movie—Adaptation—by adding a meta-narrative about a screenwriter and his fictional twin brother. Kaufman is also conversant with science fiction and surrealism, as demonstrated in his Eternal Sunshine of the Spotless Mind and Being John Malkovich. And he's no stranger to darkness, complexity or absurdity. 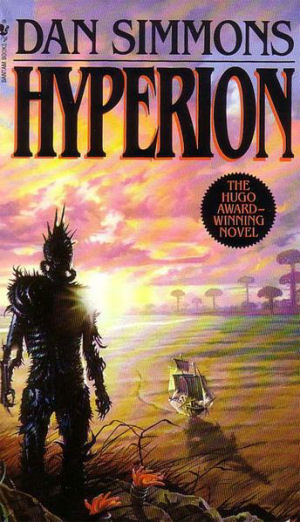 2. Hyperion and The Fall of Hyperion by Dan Simmons

Why It's Great: Set in a far-future universe in which hard SF concepts such as teleportation and artificial intelligence co-exist with philosophical mysteries about the existence of God, the two Hyperion novels play freely with the concept of time travel and galaxy-shaking events, but they also focus on the very personal stories of a group of pilgrims traveling to the title planet.

Why It Can't Be Filmed: The sheer scope and continuity of the Hyperion books—modeled roughly after The Canterbury Tales—mean that the director wouldn't be filming one movie; he or she would be filming dozens. You'd almost need a President Director overseeing a group of Joint Chiefs of Directing, all of whom would be off making their own movies. And let's not forget the difficulty of trying to create a believable and frightening Shrike.

Who Could Do It: French filmmaker Christophe Gans, s'il vous plait. His alternately slow-mo and fast-paced action sequences (have blobs of water ever looked as cool, or wet, as they did in Brotherhood of the Wolf?) would give visual horror to the Shrike, for sure. But Gans has an eye and love for beauty, too. Imagine his alien landscape, which would be both comfortingly familiar and strangely alien. Like Europe is for most Americans. 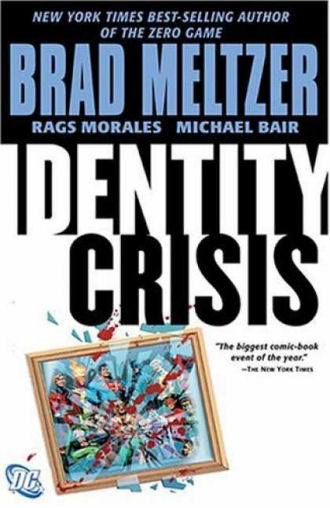 Why It's Great: Say what you will about retconning, none of it erases the fact that writer Brad Metzler crafted a cracking good murder mystery set in the DC universe: one that exposed the ugly underbelly of the seemingly unimpeachable Justice League of America. It also spotlighted second-tier characters such as the Green Arrow, Doctor Light and the Elongated Man.

Why It Can't Be Filmed: As we all know, most superhero movies get exponentially worse the more "named" heroes or villains get added. Identity Crisis offers up the entire Justice League, with snapshots of the Titans, the Outsiders and the Justice Society of America, not to mention a who's who of the DC universe's most nefarious evildoers. The casting alone would be a nightmare. And let's not forget that the story starts with a brutal murder.

Who Could Do It: Bryan Singer, but not for the reasons that you'd think. Sure, he brought two great cape franchises to life—but Identity Crisis isn't a superhero story. It's a whodunit. And who better to guide such a story onto film than the man who turned mousy con man "Verbal" Kint into the ruthless Keyser Soze in The Usual Suspects? Identity Crisis also shines in the little moments, and Singer has shown that he can take tertiary characters with brief screen time and make them pop. The comic-book boxed narration would work wonderfully on Singer's already established noir palette. 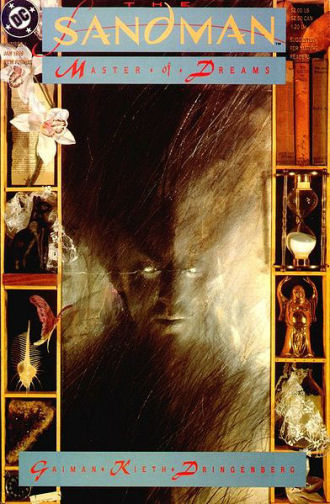 4. The Sandman Series by Neil Gaiman, art by Dave McKean

Why It's Great: Visually imaginative, thematically distinct and balanced on a razor's edge between whimsy and darkness, Neil Gaiman's Sandman comic is one of the defining milestones in the form. It's also a powerful and sometimes moving piece of storytelling, detailing the adventures of the King of Dreams and his Eternal siblings both in the real world and in fantasy realms.

Why It Can't Be Filmed: There is not a CGI special effects algorithm in existence that could render some of Gaiman's creations in Sandman in a way that would look anything but cheesy and ridiculous. And, sure, making a film that entices both fanboys and goth girls may be the holy grail from a box-office perspective, but good luck finding a writer (outside of Gaiman himself) who could package that duality in a 120-minute frame. Also, David Bowie is probably too old to play Morpheus now, so what's the point?

Who Could Do It: Neil Gaiman, meet Tarsem Singh. Only a collaboration between these two could render anything approaching a good Sandman film. Gaiman, of course, knows his own work inside and out. Singh, meanwhile, has proven himself a visionary in eye-melting features like The Fall and The Cell. If anyone could capture the anything-goes dark fantasy of the Dreaming on film, it would be him. 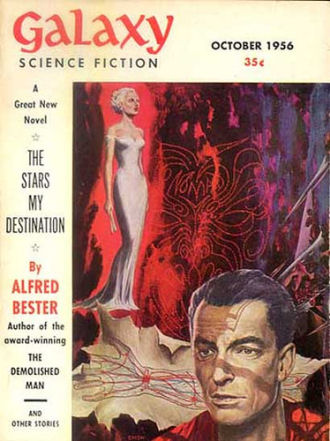 5. The Stars My Destination by Alfred Bester

Why It's Great: It's The Count of Monte Cristo ... in space! Bester's tale of revenge and obsession features one of the most memorable characters in the history of SF in the person of Gully Foyle, and it's considered by many to be a precursor to and a source of inspiration for the cyberpunk movement.

Why It Can't Be Filmed: Much of what makes the book great is the style in which Bester tells it: He was one of science fiction's first great prose stylists, and without that prose a movie would be only a pale imitation. It would be equally problematic to cast the lead. Gully Foyle—the mad thug-turned-aristocrat hell-bent on revenge—is such a larger-than-life character and is so despicable-yet-fascinating that it's hard to imagine anyone pulling off the role.

Who Could Do It: The Fountain was not the masterpiece we'd hoped it would be, but if Darren Aronofsky had had his way, it could have been a great movie. Stars would require a director who could truly get into the mind of the protagonist, and given some of the characters Aronofsky has worked with before in previous films, in his hands—with the right actor in the role of Gully Foyle (The Fountain's Hugh Jackman?)—we could see The Stars My Destination coming to life on the screen. 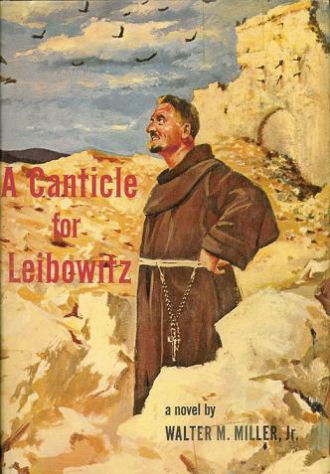 6. A Canticle for Leibowitz by Walter M. Miller Jr.

Why It's Great: Not only the best SF novel about post-apocalyptic monks, but also one of the best SF novels, period. A Canticle for Leibowitz is the pinnacle of the literature produced by the Cold War anxieties of the 1950s: It tells us that we are doomed to repeat the mistakes of our past, and that no matter how much we think we've progressed, in all likelihood humankind will live to see the world burnt to cinders by our own hand.

Why It Can't Be Filmed: Not only would the book basically require three separate films to tell the story, but the story is also understated and often introspective, not to mention relentlessly bleak. It could be that books like The Road (and its forthcoming film adaptation) will make audiences more receptive, but with so little action and no real possibility of adding any without a complete betrayal of the text, it doesn't seem like Hollywood material.

Who Could Do It: Tom Tykwer. He's best known for Run, Lola, Run, but his most recent film—Perfume: The Story of a Murderer (based on a book that it was said could not be filmed)—makes us think he could bring Canticle to the screen. Like Canticle, Perfume is dark and bleak and has little action (well, except for all the murdering), but in the end Tykwer makes it work brilliantly with pure auteuristic vision. 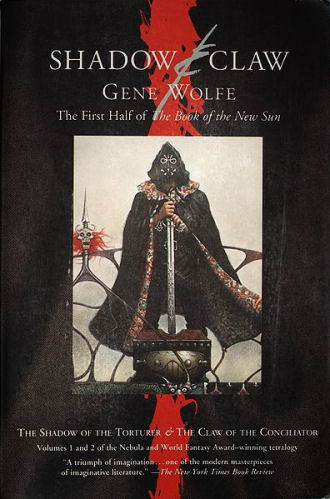 7. The Book of the New Sun by Gene Wolfe

Why It's Great: Gene Wolfe's four-part masterpiece is the pinnacle when it comes to the Dying Earth subgenre of science fiction. It features an imaginative and twisted far-future world, a protagonist/antihero who starts out life as a torturer and a strange mix of fantasy and far-flung SF. His archaic and often impenetrable language weaves words together to add flesh and texture to the bones of his story.

Why It Can't Be Filmed: Wolfe's dense writing would drive any screenwriter mad. And try finding actors who could speak his stylized patois without sounding absurd (Christopher Lee and, ... well, that's it). The books are also filled with digressions and stray thematic threads that would probably have to be cut, damaging the tone of the story. Plus, the problem of a hero who tortures for a living.

Who Could Do It: The Lord of the Rings was once similarly considered unfilmable, before Peter Jackson deftly amputated unnecessary plot points while maintaining the book's spirit in a way even the hardest-core Tolkien fans accepted. Jackson is the best man to take a stab at an epic that is, in essence, the pitch-dark side of high fantasy. As long as he casts Christopher Lee, we're there.