Tag: The Princess and the Frog

At the start of the D23 Disney fan expo on Thursday, president/chief executive Bob Iger introduced a screening of the first third of the studio's upcoming animated The Princess and the Frog, and the preview revealed that the movie bears the pedigree of its traditionally animated forebears from Snow White to Lilo & Stitch. Princess—from directors Ron Clements and John Musker—marks a return to 2-D animation for the studio that gave birth to the animated feature film.

The film stars Anika Noni Rose as the voice of Tiana, who seems unimpressed by Prince Naveen's (Bruno Campos) visit to New Orleans until she hears his voice coming from a frog. Turns out a trip to the old voodoo doctor didn't work out so well for Naveen. Following the old story, she kisses him, only to find herself turned into a frog.

More The Princess and the Frog

As the footage screened, we remembered why we liked all those old cartoons in the first place. Here are seven reasons why The Princess and the Frog promises to breathe new life into the traditionally animated movie genre in this era of 3-D computer-generated toons. Iger asks that we return to see the whole film when it opens wide Dec. 11, after a limited release Nov. 25. 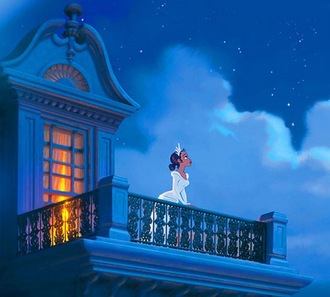 1) The rousing music. Disney's animated musicals all had a classic structure, and Princess is no exception: It begins with the song that sets up the town and the characters, followed by the heroine's song, in which we learn that she doesn't conform to society's standards (think Ariel, Belle, Pocahontas, Mulan ... ). That comes back as a slower, sad reprise a la Team America. Of course, the villainous Dr. Facilier (Keith David) gets a boisterous solo that explains why everyone should be afraid of him. This time around, the staple songs are jazzed up a la the New Orleans setting. After the screening, Rose sang the film's opening number live, her bronchitis be damned, and still rocked it.

2) It twists a familiar tale. The new, hip Genie gave Disney's Aladdin a new take on the Arabian Nights, while fairy tales got the Disney treatment in Snow White, Cinderella and Pinocchio. Similarly, The Princess and the Frog puts a reverse sping on the "kissing the amphibian" story. The film's characters even know the classic tale of the Frog Prince and reference it aplenty, and it's clear this version will play out differently.

3) Talking inanimate objects. Beauty and the Beast featured talking cookware and a candelabra. In Princess, Dr. Facilier's voodoo artifacts come to life and sing along with him. Maybe shrunken heads and voodoo dolls aren't as merchandisable as Mrs. Potts or the tree from Pocahontas, but that's what sings in the Crescent City.

4) R.I.P Daddy. What's a Disney movie without a dead parent? Tiana's father appears in the childhood prologue, dreaming of the restaurant he'll name after her and teaching her a solid work ethic. Even if she wishes on a star, he says, she still has to work hard. That dude's clearly gotta go. When Tiana grows up, she's still scrounging for the money to open up her dad's restaurant. Pops joins the ranks of Mufasa, Mrs. Geppetto and Bambi's mom.

5) Fat funny henchman. In his human form, Prince Naveen has a portly sidekick who gets all frazzled by Naveen's carefree attitude. That means when Naveen gets the dance in his pants from a local street band, he drags his servant/advisor back and forth, the underling lugging trunks and baggage all the while. It's unclear whether this character is indeed a hapless employee or actually the authority trying to keep Naveen in line. Either way, he gets his head stuck in a tuba, and it's funny.

6) The meager acquire wealth and royalty learns a lesson. Now here's where Princess has it both ways. Disney stories depict either the rise of a humble everyman (Aladdin, Belle, Quasimodo) or the education of a king/queen/prince/princess (Ariel, Simba, The Beast). Like Beauty, this one has both. Tiana will surely triumph over adversity (both poverty and the frog thing), and Naveen gets taken down a peg or two.

7) It's prettier than CG. The Princess and the Frog may use old-school techniques, but that's what makes it as bright and colorful as the classics. The bright pink bedroom of a wealthy neighbor explodes in pastel. A trip to Tiana's neighborhood shows the disparity of wealth. The backgrounds explode with detail that conveys age and experience through simple shading and textures. The skies glow lavender, transforming New Orleans into a fantasy realm of Disney lore. In a key fantasy sequence, Tiana's dream for her restaurant, the 2-D is more down to earth, but the colors are pure and the lines crisp. Animation never looked so good.

Tag: The Princess and the Frog
Close Search Return to SYFY homepage.