Of all the many amazing things about sci-fi, one of our favorites is that it sometimes comes true. Fictional tech, concepts that once represented the extreme limits of the imaginations of our greatest sci-fi writers, can become real—but often the reality puts the dream to shame.

With that in mind, take a look at some classic sci-fi devices that were once considered unfathomably futuristic technology, but which are now amazingly archaic.

The Hitchhiker's Guide to the Galaxy 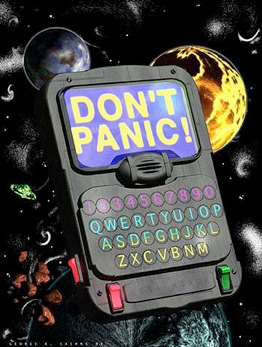 One-Upped by: The Internet 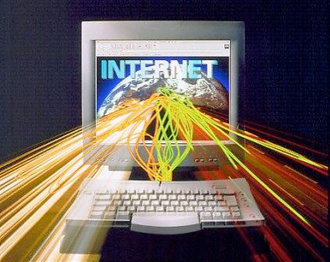 The amazing device from which the classic book got its name, the Guide has everything an intergalactic traveler could need. (Except a towel!) Just type in pretty much anything in the known universe, and the guide will present sassy, pretty accurate observations. The sheer scope of research involved was often the butt of jokes and scope of subplots. After all, this invention had everything anyone had ever heard of. How could such a device exist, yet still fit into one's back pocket?

Fast-forward a mere 25 years, and the Guide has become reality. From the Internet, one can immediately get sarcastic, semi-accurate information about anything and everything in the known universe. All in a variety of handy portable devices. Plus the level of interactivity far surpasses the capacities of the Guide, which couldn't even be used to order Chinese food. Based upon the progression of the novels, it would be reasonable to assume that the next-generation PDA will probably turn into some kind of quick-witted bird. 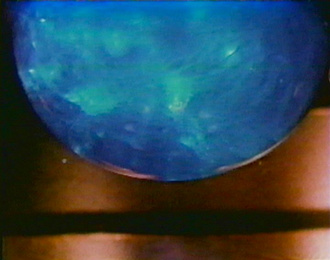 One-Upped by: A Modern Supercomputer 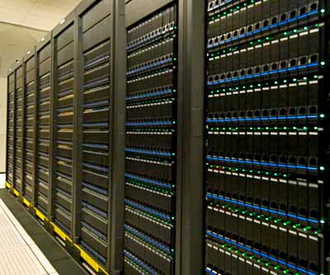 One trillion floating point operations per second (one teraflop) is a threshold we are on the verge of exceeding. Here is an eHow article about how to achieve this computing benchmark. Ziggy's power is rapidly becoming outdated.

What is already outdated is Ziggy's ability to retrieve data. A typical command from Al (given to Ziggy through the medium of a bulky, awkward handset) would take Ziggy several minutes' worth of TV time to execute. That's Prodigy-level Internet slowness. We imagine a Quantum Leap reboot would have A.l. type something into a laptop and tell Sam, "OK, Google says ..."

Don't forget that modern supercomputers come with the built-in feature of not leaping their users haphazardly through time. That was one question Ziggy's "Barbra Streisand" ego could never answer: "What is going on exactly with the leaping, here ... is this God, or what?" 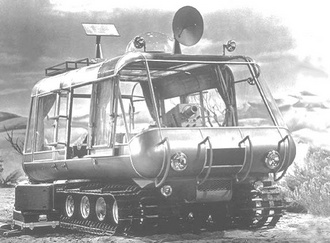 One-Upped by: A Modern SUV 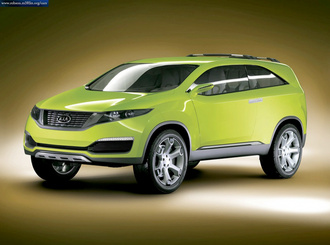 Lost in Space had a lot of cool technology. Suspended animation tubes, atomic motors and a hysterical robot all added to the futuristic feel. So, when it came time to outfit the Robinsons with a vehicle, they made a rover that seemed, at the time, revolutionary.

The Chariot has a few quirky features that aren't standard on any modern car, like an infrared scanner. But a modern driver could probably just push the OnStar button and ask the operator to scan for infrared (or whatever the LiS writers thought infrared scanners did). Curiously enough, the Chariot was amphibious. Considering how impossible it has been to find water on any planet, anywhere, we find this feature a bit extraneous.

But the Chariot also contains some features that are remarkably outdated. Clear windows necessitated Mylar curtains, something we haven't seen on cars since the phrase "If this van's a-rockin' ..." was popular. Seriously, the show is called Lost in Space, and they're concerned about people not seeing them?

Oh, and it only seated six passengers. In bucket seats. It was never revealed where the Robinson children were conceived, but it sure wasn't in the back of this thing. 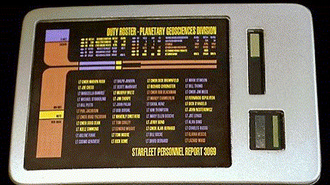 One-Upped by: The iPad 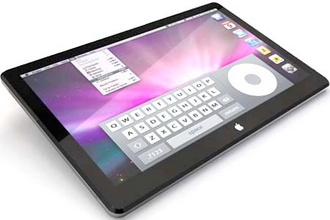 Thanks to people who grew up loving Star Trek as children, and now work for Apple, we got this piece of technology a century early. Since humans made Jules Verne's dreams a reality by walking on the moon, it never fails to thrill us how fast sci-fi dreams are ushered into the real world.

Standard issue for the Starfleet in the 22nd century, the P.A.D.D. had many useful features. It could transmit wirelessly, display schematics and play movies.

Like modern electronics, the P.A.D.D. had its own development throughout the series. The 24th-century model was almost solely used by touching a screen. Not bad, but we're sure the Enterprise captains would've probably liked some Freecell while drifting through empty space. How about one of millions of books? The iPad incorporates modern technology into this classic sci-fi design, moving us one step closer to achieving the ultimate dream (holodeck). 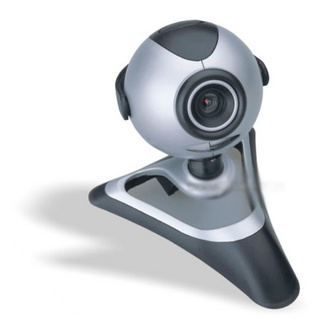 Video phones are frequently viewed as technology that is cool to have, not so cool to use. A lot of the charm of videophones, as seen in 2001: A Space Odyssey and Blade Runner, was actually the hands-free communication. Once we mastered that, videophones kind of lost popularity, as calling in sick to work now involves props. Not to totally hate on the idea: videophones do have many uses. Skype is extremely popular, and flirting via webcam is just another modern tool of the single person.

One of the clunkiest fictional videophones is the one from 2001: A Space Odyssey. The "phone booth" is about the size of a monolith, compared to the pocket-sized videophones we carry today (oddly enough, on devices shaped like the monolith). Plus, after speaking with his daughter, Dr. Heywood R. Floyd did not have the option of chatting with someone at random ("My God, It's Full of Justin Bieber!"). 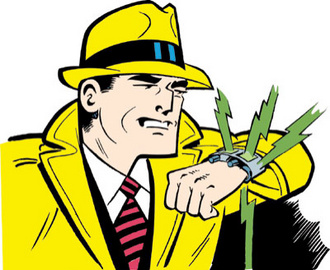 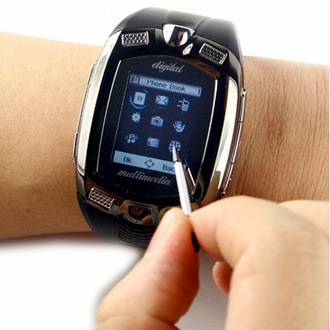 Remaking the classic police detective's super-cool radio watch has been done in a variety of impressive ways. Tracy would smoothly put his watch to his lips and say something cool to police HQ, like, "Help!"

Imagine if Dick Tracy had had a watch like this. FM radio, MP3/MP4 player, e-book reader ... probably none of this would've helped Dick Tracy get out of a jam, but at least he'd never be bored on stakeouts. They also make cell-phone wristwatches with GPS and television and streaming newspapers, so Dick Tracy could get out of a jam by reading what happens in the next panel.

The classic Dick Tracy two-way radio watch has not only been achieved, it has been exceeded in ways he never would've detected. The modern sci-fi hero has a host of wireless, tiny communication devices to infiltrate any situation. Or just to watch TV, if it's the sci-fi hero's day off. 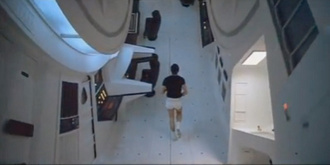 One-Upped by: An ordinary modern treadmill. 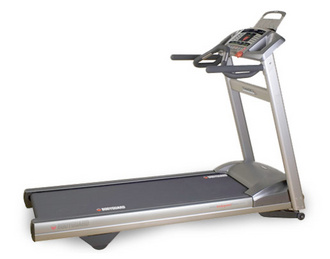 The opening scene of that 360-degree treadmill is stunning, not unlike the rest of 2001: A Space Odyssey. The disorienting camera angles brought home the notion that this world was not quite like ours, it was confusingly futuristic.

However, it makes zero practical sense. It's hard to tell if the room is rotating or not, but it looks like it's designed to move like a treadmill. There's absolutely no need for the floor to move. The astronauts could just run around the loop; having it move is totally extraneous. Also, this exercise equipment takes up an enormous amount of space. Last time we checked, space stations weren't exactly known for their roominess. Modern treadmills give the exact same workout without taking up an entire gymnasium's worth of room.

The one thing a 360-degree treadmill might be useful for is zero-gravity training. But NASA's already got that covered. They have space treadmills that aren't enormous, and they've even developed a sideways treadmill for astronauts to simulate a weightless workout on Earth. Not sure why they just don't toss a treadmill in a swimming pool, but that's why we don't work for NASA. 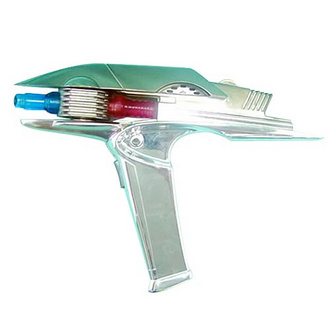 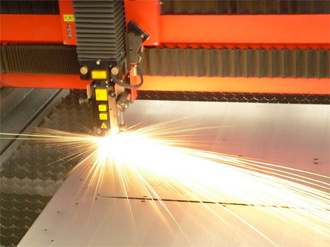 The writers of Star Trek: The Original Series have had to tweak phasers as technology surpassed their capabilities. In its original conception, the phaser was a photon maser. What's a maser? It's like a laser, but it shoots microwave beams. Back then, people thought microwaves were the choice tool of the future. It soon turned out that lasers provided much more, and they were cool so scientists loved them. The creators were faced with a unique dilemma: Their "futuristic" sci fi technology had already become rather outdated.

So they made the photon shoot lasers; well, not lasers exactly, but a fictional thing called "rapid nadions." It's too bad they never came up with something like a crowd-control microwave gun. Phaser has been backronymed to stand for "Phased Energy Rectification." Since it shoots imaginary particles, you'd think that this version of the phaser would be free from imitation. However, something being fictional doesn't necessarily stop the Pentagon from trying to make it anyway.

And why not? Because chasing the dreams of sci-fi authors and making them reality is obviously not as flighty as it may seem. One by one, the devices from books, movies and TV have been made real ... and often made better.