83 crazy differences between Fringe's alternate universe and ours

Fringe will finally be back on its new night this Friday, and the action between the two worlds is expected to heat up as Walternate looks to destroy OUR reality. To celebrate the show's return, we take a look at one of the best things about the show—the wild differences between the two worlds.

Here are some of our favorites, along with the episodes in which we first found out about them.

The alternate universe seems to be a couple of decades more advanced than our own, with major differences when one crosses over:

♦ The Challenger launched on its 11th mission on June 28, 1984, rather than the five missions up until that point on our side. (Our Challenger would only complete 10 missions by 1986, never completing the 10th, having been destroyed on January 28, 1986.) (205 - Dream Logic)
♦ Double-decker cars--toy versions, anyway--seem to be popular. (215 - Jacksonville)
♦ In 1986, cars were equipped with CD players as a standard option. (215 - Jacksonville)
♦ The alternative universe invented a comparatively modern cellular telephones by 1985. (216 - Peter)
♦ Airships are commonplace over NYC by 1985 and through 2010, and the Empire State Building continued the use of observation deck as docking platform, as originally intended. (216 - Peter) 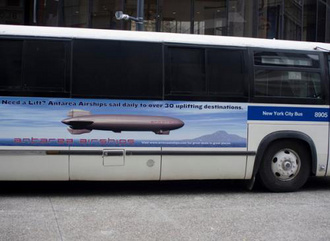 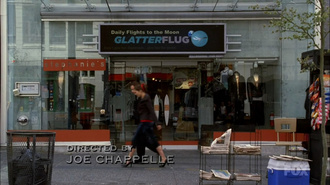 As to be expected with an alternative world, slight changes lead to changes in the history of the nation:

♦ The World Trade Center in New York City is still standing as of 2009, unaffected by the terrorist attack. (120 - There's More Than One Of Everything) 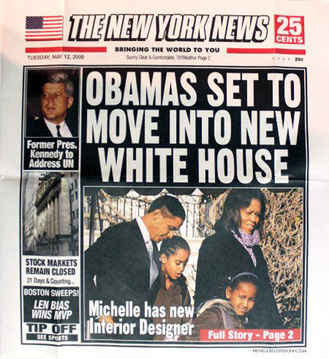 ♦ Barack Obama was elected president in 2008, although as of 2009, there is a new White House with a glass dome that has recently been completed. (120 - There's More Than One Of Everything and 219 - The Man From the Other Side)
♦ President John F. Kennedy was not assassinated in 1963 and becomes an ambassador at some point after his presidency, stepping down in 2009, putting him at the age of 84. (120 - There's More Than One of Everything and 301- Olivia)
♦ The White House and the Pentagon were destroyed in the Sept. 11 attacks. The White House was built with a glass dome in 2009, and the Pentagon was being rebuilt by 2010. (215 - Jacksonville)
♦ Richard Nixon is the president featured on a U.S. dollar coin as of 1983, rather than President Eisenhower. (215 - Jacksonville and 222 - Over There, Part 1) 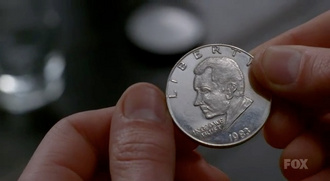 ♦ The American Flag has only 48 stars, not 50, designating that the geography of the United States is different. (219 - The Man From the Other Side)
♦ President Andrew Jackson was either never president or had a far more obscure presidency on the other side, and he isn't on a $20 bill. Rather, Martin Luther King Jr. is present on the bill, which is appropriately nicknamed a "Junior." (222 - Over There, Part 1)
♦ There are numerous differences in the organization of the United States. As noted before, the American flag has only 48 stars. (222 - Over There, Part 1) Differences include:

o Texas is two states (North and South Texas),
o Kansas and Oklahoma are a combined state (Midland).
o North and South Carolina are a single state (Carolina).
o North and South Dakota are a single state (Dakota).
o Washington is known as Southern British Columbia.
o Michigan is two states, Michigan and Upper Peninsula
o Virginia and West Virginia are not states, but are called the District of Virginia.
o Louisiana is not a state, but a territory.
o Nevada is not a state--in its place is Independent Nevada.
o The U.S. border seemed to extend into our Canada.

♦ Charles Lindbergh is an unknown person to the other side, or at the very least, the kidnapping of his son never happened. (223- Over There, Part 2)
♦ Eldridge Cleaver was associated with Martin Luther King Jr.'s famous "I Have A Dream" speech, rather than being associated with the Black Panthers. (301- Olivia) 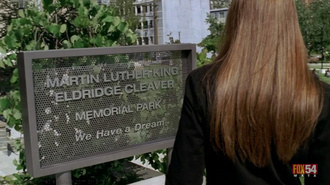 Popular culture also has its own differences in films, sports, books and people. One thing's for sure--sequels are just as popular over there:

♦ Len Bias, the basketball player who died of a drug overdose on our side, is still alive and received a NBA Most Valuable Player Award. (120 - There's More Than One of Everything) 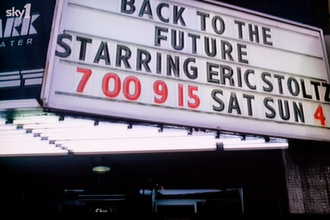 ♦ Back to the Future starred Eric Stoltz, and other films in 1985 were Clue, Superman vs. Batman 2, Indiana Jones and the Hex of the Hydra, Star Wars: Legion of Droids, Splash 7, Smokey and the Bandit: The Final Lap and Mask vs. Joker. (216 - Peter)
♦ The television show The West Wing is now in its 11th season (where it only reached 7 in our world). Barack Obama and Sarah Palin are on the advertisement for the show. (222 - Over There, Part 1)
♦ Cabbage Patch Dolls are still popular in 2010. (222 - Over There, Part 1) 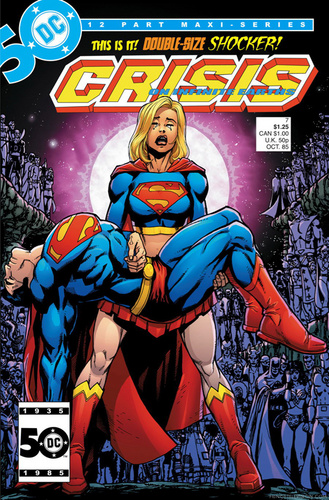 ♦ The Brooklyn Dodgers never left Brooklyn and remain in New York City rather than moving out to Los Angeles. (223- Over There, Part 2)
♦ Tom Cruise might be a TV star, rather than a film star. (301- Olivia)
♦ Dogs is a musical in NYC, rather than Cats. (301- Olivia)
♦ The band U2 or lead singer Bono aren't present in the other universe, or aren't well known. (302- The Box)
♦ Cary Grant, not Humphrey Bogart, starred in The Maltese Falcon and uttered the famous line "The stuff that dreams are made of." (305 - Amber)
♦ John Lyly, English Renaissance poet, never seems to have existed or was otherwise unknown. He was the one who said: "The rules of fair play do not apply in love or war", otherwise known as "All's fair in love and war." (306- 6955 kHz)
♦ Casablanca starred Ronald Regan, and the film had a happy ending. (307 - The Abducted)
♦ Board Game called Quarantine Zone. (307 - The Abducted)

At the present day, there's a number of differences in the government, city features and people:

♦ In 2010, half of Boston is quarantined in amber for a fringe event. ((119 - The Road Not Taken))
♦ Susan Pratt and her sister were never split up as children, and as a result, both are burned alive at the same time that Susan Pratt in our universe is killed by the same fate. Because of the separation, her sister remains alive on our side. (119 - The Road Not Taken)
♦ Coffee appears to be a rare and expensive commodity in the U.S. (215 - Jacksonville)
♦ Downtown New York City is spelled Manhatan, not Manhattan. (215 - Jacksonville) 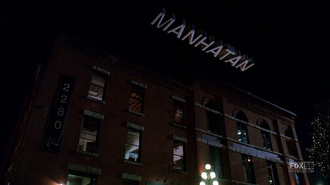 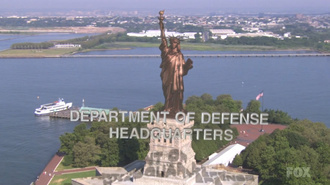 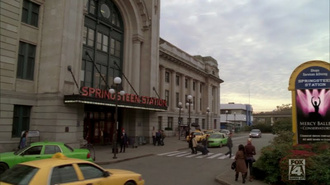