Director J.J. Abrams confirmed to us that the follow-up to his hit Star Trek won't hit theaters until 2012, speaking last night at a party at the Griffith Observatory in Los Angeles to celebrate today's DVD/Blu-ray release. But that could change. And the creators gave us tantalizing hints about the sequel's timeframe and other story points.

Producer/writer Damon Lindelof told us that he thinks it's impossible to be done sooner. "Yeah, I think that we would be hard pressed to get it on screens by 2011," Lindelof said. "If that's the case, we'd better get to writing right now."

For his part, co-writer Roberto Orci wouldn't talk about release dates. "Who knows? It could still be whenever," Orci said. "I haven't heard any firm dates. It could be sooner or later."

What about the story?

Time shifts. Lindelof suggested that the sequel may play with time in relation to the first film, much as The Bourne Ultimatum takes place largely in between events from The Bourne Supremacy. "One of the things we like to do as storytellers is drop you in the middle of something," Lindelof said. "And the question that you're asking yourself is: Where am I in relation to the last time I left these guys? Could this be something that predated even, perhaps, some of the adventures that they had in the first movie? Does it happen five years later? Is it happening two seconds later? Who knows? So we're not going to tell you."

Whatever you're expecting, you're wrong. One way to combat sequilitis is to avoid the cliche of bigger, louder and more explosions. "Do we have to do that?" Lindelof pondered. "Is there something else that we can do that's a little bit off the beaten path? When you buy your ticket and your popcorn and you go and sit and watch the second movie that we're all working on together, we want to give the audience an experience that feels like it's not a sequel in all the best ways." 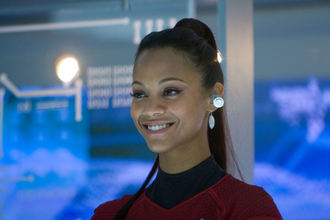 Spock (Zachary Quinto) and Uhura (Zoe Saldana) will reach the next level. "Now that we've done that, you can't play that same joke again," Abrams said. "It's got to be about 'What is their relationship?' and 'Who are these people?' That's why the next one, hopefully while still maintaining the sense of fun and adventure, can go a little bit deeper in terms of the script."

Khaaaan! Abrams, Orci and his writing partner Alex Kurtzman keep hinting that they may introduce the character of Khan Noonien Singh, but haven't committed to anything. We asked Abrams to weigh the pros and cons of revamping a classic Trek villain. "We're not even at that stage yet, but the fun of where we are on the sequel is we could use some of what was done before in a new way," Abrams said. "But we haven't even figured out what we would use yet, so it's very early on." Orci added that the creative team would vote on whether Khan works for their new story. "That'll be kind of a groupthink decision," Orci said.

It's getting close. They are narrowing the ideas down, really. If it sounds like they're just not committing because they don't have anything, don't worry. They're down to the big-picture decisions, like what the philosophical theme of the sequel could be. "There's a couple themes up in the air that we're debating about," Orci said. "But we want them to be invisible, so it won't be until the movie comes out that you'd ever hear what they were. We're zeroing in some compass directions. It's still the story phase." 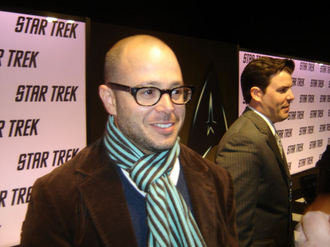 Abrams still wants to direct it. The last time Abrams gave a press conference, he cause a lot of speculation with the phrase "If I, in fact, direct the Star Trek sequel." Abrams clarified that he has every intention of doing it, but there's nothing to commit to. "In theory, I would be available, and it would be fun to do," Abrams said. "Since there's no script, it's hard to talk about directing a movie that the story doesn't even exist."

Could Star Trek 2 be 2012's The Dark Knight? Star Trek is already the highest-grossing Trek movie ever. It's been so well received universally that Abrams expects to have an even bigger audience for the sequel, by the time more fans discover the film on DVD. Another example of that was Batman Begins. "Certainly no one is looking to expect any kind of Dark Knight numbers on a Star Trek sequel," Abrams conceded. "Hopefully the quality of the cast of the first film, the fun of the movie, will eventually, over time, touch people who would not normally have gone to see the film in theaters. When a sequel comes out, they're converts, because they'd actually seen the film that was made originally. That would be the goal."

Start the A-list casting rumors now. Star Trek featured major stars like Winona Ryder and Tyler Perry in supporting roles. Abrams is open to bringing a movie star in to attract even more viewers. "I think that it's not a bad idea to begin thinking practically in that way," Abrams said. "What can be done to help open it up? In terms of casting, sure. Casting an international star would be a really good idea."