People forget that when you put the leading research scientists together to work on a solution, you're often putting together a bunch of science fiction nerds. Which is why, sometimes, environmental cleanup plans go past the realm of "normal," into a realm we call "super awesome."

To celebrate Green Week, here's an octet of ideas that sound like they came from some futuristic film.

Russia Puts out Oil Well Fire With a Nuke 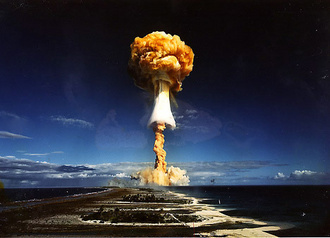 Oil well fires can be tricky to put out, because of the near-limitless supply of fuel (oil) for the fire to burn. Therefore, stopping the harmful blaze can be a mind-bender. Popular techniques include lighting explosives to consume all the available oxygen, leaving nothing for the fire to burn. Not-so-popular techniques include drilling below the fire, planting a nuke, then detonating it. The explosion causes the well to fill with rock, shutting the fire off from its oily fuel source. Also, we might add, it looks unbelievably cool.

Setting off nuclear devices under the ground has all sorts of potential problems. First, there's the fact that you are setting off a nuke underground (not sure if we've mentioned that). The immediate damage could end up being worse than the problem being cured. Most importantly, there is a high rate of failure. In addition, it's pretty much correct to always doubt anything a 1970s Russian propaganda film claims will happen because of nuclear devices (like utopia). 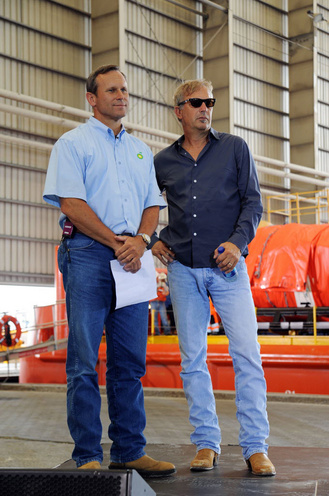 Kevin Costner's Waterworld may have been a colossal box-office disappointment, but it also symbolizes hope for our planet's future. Costner's obsession with all things aqua bled into the real world in 1995 when he purchased Ocean Therapy Solutions. This company is known for developing machines that can separate oil from water by flinging it around really fast, kind of like how a wet dog separates water from itself.

Reportedly Costner put $20 million into the firm. In 2010, BP tested six of the machines. They liked the results so much that they ordered 32, with the goal of cleaning up the Deepwater Horizon oil spill. According to the maker, that's enough machines to separate 6.7 million gallons per day. For an oil spill that gushed 2.5 million gallons per day, that seems like quite an effective solution.

First of all, this "dream machine" only addresses one of the problems caused by oil leaks. Namely, getting the oil that is mixed in with the water out of the water. The effect on the environment and the disruption of native ecosystems are huge issues that separating oil from water just cannot fix.

In addition, a lot of the oil hardens and sinks to the bottom. This is the hardest part of cleanup efforts. Kevin Costner's machine may be able to clean water, but getting the oil from the bottom of the gulf and putting it in the machine is a different ordeal altogether. Kind of like how one day they'll need a machine to separate Costner's fine acting resume from his country music shtick.

Move the Earth Farther From the Sun 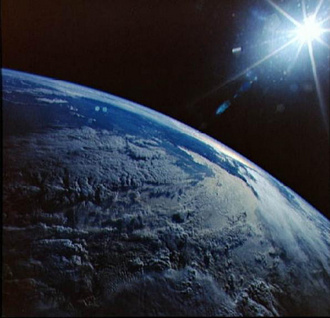 It takes a special kind of left-field thinking to examine the catastrophic effects of global warming and conclude, "It's the Earth's fault."

But this is just the case, according to an article in the peer-reviewed academic journal Astrophysics and Space Science. Specifically, the Earth is warming up because it's just too darn close to that hot old sun. There's literally something out of balance with the universe.

Just how does this article propose we move the Earth? First we need a large asteroid. No problem, they're free. Then we change the asteroid's orbit so that, due to gravitational pull, it slowly tugs the Earth away from the sun. Kind of like how each pull of the leash tugs a dog slowly away from a shiny piece of excrement.

As plans go, this is the utmost last resort, when everything else has failed our species. First of all, changing the gravitational pull on a planet is not a gentle process. It causes tidal waves and tsunamis and would probably throw off every single basketball player's shot, ending the sport as we know it. Since the plan is estimated to require 6 billion years to fully execute, we might as well spend the time looking for a more viable solution. 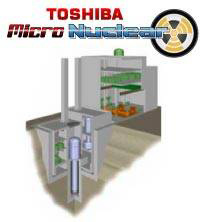 All of this power we're consuming sure has a noticeable effect on the environment. That's why Toshiba has built a miniature nuclear reactor. Toshiba has plans to market the device to consumers as early as the mid-2010s. The small generators are expected to create 30 years of power for about half the current cost of grid electricity.

The entire device would be buried deep under a household and provide the modern future family with the power of the atom. Not bad for Toshiba, a company that had trouble repairing its own laptops.

We don't know if you've ever seen Back to the Future. Just kidding, we know you've seen it. The point is, people don't like other people screwing around with unstable elements (like plutonium). The United States has set up an entire Nuclear Regulatory Commission to keep these elements from falling into just anyone's hands. As it stands, now, it is unlikely the NRC will allow the household nuclear reactor into America.

Not only that, but Toshiba has not entirely outlined how they plan to test for safety. Sure, the concept of one house with nuclear power seems harmless. But imagine a city of millions of houses, each with a high-powered nuclear tank underneath it. We don't want the nuclear family to become "1.5 heads per child."

Ride the Power of Infinite Tornado 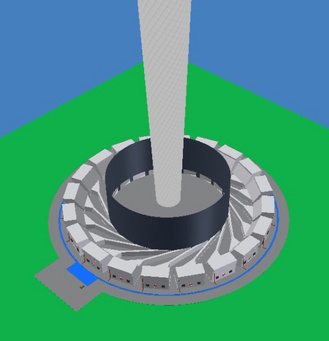 Why a miles-high mega-tornado? To create power. Michaud estimates that once it gets going, the tornado will require a relatively small amount of power to maintain its awesomeness. Then turbines collect the power and, ideally, light up entire cities.

There's absolutely no problem with this whatsoever. Except a two-mile-high tornado ripping loose and tearing up entire swatches of countries. Michaud has plans to unveil a commercial machine within five years, so get prepared.

Cover the deserts with white reflectors 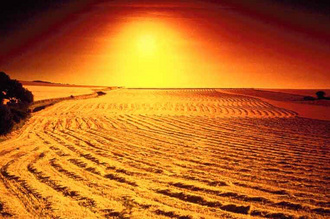 Earth's deserts are pretty much the laziest side of Mother Nature. They just sit there all day, sucking up heat and not producing anything. Scientists have noticed that the deserts could help cool the planet if they were just more reflective. A plan has been introduced to cover the major deserts in reflective white tarp.

The theory behind this is simple. On a hot sunny day, black clothing feels hotter because, to phrase it loosely, black absorbs more light and heat. In this sense, deserts are like black clothing that the Earth is wearing. The plan is to simply change that clothing into white (but not after Labor Day, of course).

First is cost. Alvia Gaskill, president of a major geoengineering consulting firm, estimates this plan will cost half a trillion dollars per year to maintain. Dr. Gaskill also warns that changing the Earth in such a significant way could have unpredicted but disastrous side effects. Like everyone who's lost in the desert starts hallucinating that they're in the movie The Cell.

Take all our carbon deposits and sink them into the ocean 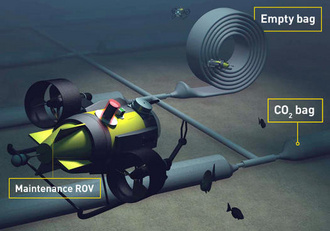 One current idea is to lay giant bags along the floor of the ocean. Then we fill the bags with the carbon dioxide output from power plants. That's pretty much it: enormous, carbon-filled bags resting at the bottom of the deep ocean. Then Syfy can make a movie about a sentient ocean monster with long carbon-filled arms and call it Carbon Dioctopus.

It's estimated that prototypes will be ready for market testing in 2020. The problem is, most containment materials can only last a few thousand years. That means we'll have to find another way to store all that carbon dioxide between now and then, so this is just a temporary solution. Also the amount of carbon dioxide we produce is staggering compared to how much a bag can hold. Estimates say that to reduce our output by just 20 percent, we'd have to fill a bag every 11 days. That's impressive, considering the bags are bigger than any structure except the Great Wall of China. Although the oceans are huge, covering 70 percent of the earth's surface, that's no excuse: There are huge people, but that doesn't give us an excuse to wipe our hands on their shirts. 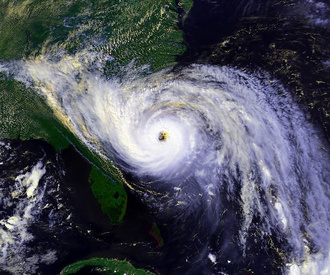 Anyone whose ever read Dave Barry's light-hearted humor knows that hurricanes are a horrific disaster that can rip towns apart. Scientist Ken Caldeira thinks we need to stop being nature's whipping boy and fight back. He's developing an enormous funnel that can, theoretically, be dropped into the ocean to disperse hurricanes.

The design is simply a funnel that's hundreds of feet wide. By creating an exchange of warm and cold water, Caldeira feels that the hurricane will be weakened significantly. Not a bad way to end the whole mess, considering the damage and cleanup involved with the average hurricane.

Underlying everything is the fact that Caldeira wants to drop an enormous funnel into the ocean near a hurricane. If we had the technology to do this, couldn't we just build a giant dome and drop it on top of the hurricane itself? At this point, the practicality still needs ironing out; we're not even sure if this will destroy the hurricane or just push it somewhere else. Although, knowing communist Russians, there's probably some good footage of U.S.S.R. launching nukes into hurricanes, so maybe that works.

Science is a fantastic yet fickle field. No one really knows which new breakthrough will revolutionize the way we view our world. It's impossible to say which of these inventions won't work (except the hurricane-killing funnel—that won't work). It's also difficult to tell if any of these inventions will become modern staples somewhere down the line. It's just good to know that at least some of the world's most fantastic minds are thinking of new ways to save the planet, rather than simply just figuring out new features to put on the next iPad.