We know what you're thinking: "Oh, God, not another one." Seems like every vampire book is being adapted as a movie or TV series, and Darren Shan's saga is the latest: Cirque du Freak: The Vampire's Assistant. Shan has written 12 books in the Darren Shan saga (yes, the hero is named after the author), and the first film incorporates the first three stories.

But Vampire's Assistant isn't a run-of-the-mill vampire story, and here are eight things that set it apart from the other fangbangs. The film's stars—Massoglia, Reilly and Salma Hayek—spoke in a news conference earlier this month in Beverly Hills, Calif. The film opens Friday.

1. It has way freakier creatures than just vampires. There's a lizard boy, a monkey girl, a woman who regenerates her limbs, a dude with an exposed spinal column and even a bearded lady (Hayek). "I actually found the concept of the circus freaks a lot more interesting than the vampires, maybe because there's been less movies done about that," Hayek said. "They were interesting characters. It just happened to be a vampire project."

2. There are vampires and Vampaneze. In this film, Crepsley's friendly vampires are pitted against evil ones called Vampaneze, who kill people to eat. Crepsley's vampires just taste people and let them go. Then there's Mr. Tiny, a third party manipulating both sides, trying to start an all-out war. 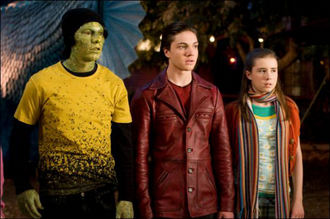 3. Fringe's Observer appears. In a fat suit. The menacing Mr. Tiny is played by Michael Cerveris, who plays the bald alien-like Observer in Fox's sci-fi TV series. He's unrecognizable in his oversized prosthetic costume. The makeup was so convincing that Cerveris freaked out his crew members when he showed up out of costume. "They didn't know who this weird skinny guy was talking to them who seemed to know a lot about them, but they had no idea who the hell I was," Cerveris said.

4. The vampires flit. Not run really fast, but flit. One of Shan's contributions to the vampire mythos is flitting. On screen, flitting looks like a fast dash out of frame, like a live-action Tex Avery cartoon or Jim Carrey in The Mask. Vampires in training need to be taught how to flit. "That involved Chris getting on my back, and me trying to run with Chris on my back," Reilly said. "My knees used to be able to do that much better than they're able to now. But we only had to run a few feet and then the effects would kick in. That's one of my favorite parts of the books, actually, the fact that they can travel so quickly."

5. This vampire's no teen idol. Unlike Twilight's Robert Pattinson, Massoglia probably won't appeal to teen girls, and he isn't worried about it. "I don't really think I feel pressured to become a teen sensation, because that's not really my goal in life," Massoglia said. "It's not really about being a star, being popular or having lots of girls. For me, it's just about learning and being there, understanding and developing my acting abilities and being able to look for the next project, so I can act in it." 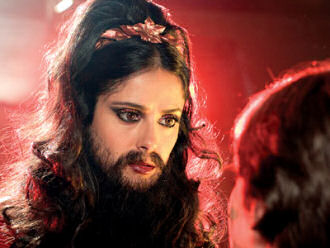 6. Salma Hayek appears. In a beard. Hayek plays Madame Truska, the Cirque's psychic, and sports a beard thicker than Tom Hanks' in Cast Away. Fitting for the woman who played Mexican artist Frida Kahlo. "It's the third time I've done some kind of freak facial hair in a movie," Hayek said.

7. It's got John C. Reilly as a sexy vampire. Really? The pudgy guy best known for playing losers in Boogie Nights, Magnolia and Chicago? Yep. "Of course, in two years, it will be, 'John, why are you always playing vampires, always kissing Salma Hayek? Why?'" Reilly said.

8. There's no teen angst. Darren Shan doesn't brood over a forbidden love with some mortal girl. Rather, he hooks up with the monkey girl. "I also liked that it was a film that is for young people, but it doesn't treat young people as a cliche," Hayek said. "It's respectful of their uniqueness. It doesn't tell them exactly what they're supposed to think. It gives them space to take different things in different ways."