Camelot comes roaring onto the screen tonight on Starz, and while it's just shy of the full monty you'd get from Spartacus, the stars and creator Chris Chibnall promise a racy, bloody "warts and all" version of the Athurian legend you haven't seen before.

We talked to actor Joseph Fiennes (Merlin), actress Tamsin Egerton (Guinevere) and series creator Chibnall in a conference call, and they told us eight reasons you're going to want to tune in to Camelot's premiere tonight on Starz at 10 p.m. ET/PT.

"There have been so many different versions of the legend and of Camelot," said Chibnall. "So what I wanted to do is strip it all back and sort of go back to the beginning and tell the story of Arthur from the beginning of the relationship between Merlin and Arthur, from its very first meeting."

Using Thomas Malory's 15th-century work, "Le Morte d'Arthur," as his primary source material, Chibnall felt it was "the most complete version of the myth, in many ways."

In Camelot, King Uther is murdered by his daughter, Morgan, but before she can claim the crown, the wizard Merlin installs Uther's illegitimate son Arthur on the throne. The series also stars Jamie Campbell Bower as Arthur and Eva Green as Morgan.

"It's very exciting to turn the myths upside down and to get to the legend in a visceral, modern way," said Fiennes. "It's told in a wonderful cinematic way. It's a great team of actors. And there's so many of these episodes that we kind of in the back of our mind know about, the sword in the stone, the lady in the lake, because it's great to visit them and get them coherently in a really exciting way."

While creating the series, Chibnall focused on trying to "make it feel real. ... Here are the events, and here are the stories that we know. But what might it have been like if you lived through them? If you take it for granted that all this stuff happened, how would it be to be Arthur and be 19 and just be quite happy and comfortable in your life, and then this mad shaven-headed man turns up at your house and says, 'Oh, you're adopted, and by the way you're the king. And come with me halfway across the country. We got to sort out some warlords.'"

Chibnall said he was "really looking for the emotional truth in everything. And that's the way I kind of approached it. And from then on you just start to ask questions. You don't want to go with the perceived images."

Merlin is a Machiavellian, bipolar spin doctor and warrior monk 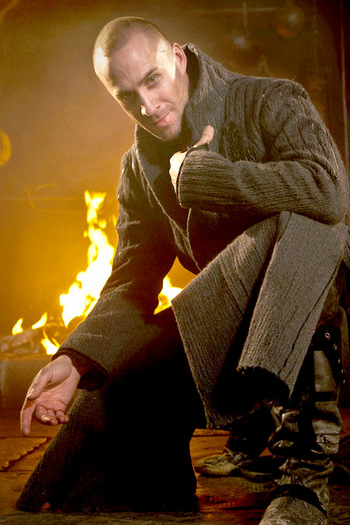 This is a completely fresh take on Merlin, said Fiennes. "In his Machiavellian, bipolar way, he's not to be trusted. Yet he is fighting for this great seat of power and is really sort of the puppet master, to some degree, in orchestrating Camelot and King Arthur," he said. "So he's a strange, dark, devious character, and I just wanted to have fun and get away from the cloak and the staff and long, long beard and the pointy hat."

"Merlin is a very clear kingmaker and more of a spin doctor," said Chibnall, "As Joe said, we ditched the pointy hat and the cloak and the staff and the beard in our very first discussion. And so Merlin is much more of a Donald Rumsfeld/Karl Rove type character, which changes the emphasis of things immediately."

Through their discussions, Chibnall "came to the idea that he was more a warrior monk that is coming to terms with his powers and how they can affect him and others," said Fiennes.

Guinevere gets naked and confused 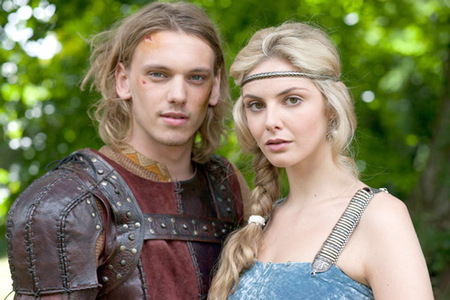 According to the fetching Egerton, Chibnall "wanted a variety of things in this Guinevere. He predominately wanted her to be real and natural and make mistakes and be passionate and, you know, be the feisty young girl, but then also [be] completely naive and innocent and ignorant at the same time. So it was, yes, fantastic as an actress to be able to play all those things, and also quite confusing at times."

However, to serve the lusty story of Camelot's beginnings, Egerton and several of the actors (mostly female) found themselves doing nude and explicit sex scenes.

"Guinevere and Arthur's story is so about the passion. It's about the sexual attraction between them," said Egerton. "And you can't have that story and show that sexual attraction with them kissing and then shutting the door. I mean, it just doesn't work."

The nudity and sex is "such an important part of their relationship, and what happens in Camelot later on and who they are and how they bond," she added. "As an actress, obviously you don't want to, you know, run into these scenes willy-nilly. But I found ... the couple that I did do were important for the character and were essential for the plot and to show what actually was going on between each character."

According to Egerton, "It's a lead role for a woman who's strong and has a real journey to take and to go on. And she has some fantastic storylines and really grows up in the first season." 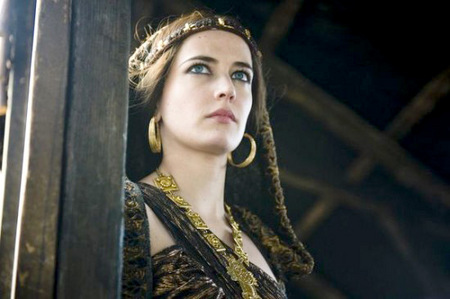 Egerton acknowledges that beyond the nudity and sex there is more than a little violence to be had in Camelot. "The battle scenes ... are quite gory, and they're quite strong," she said.

"What's key to Camelot is it's a story about passion in both the personal and the political," said Chibnall. "The political aims are brought down by personal passions all the way through the myth. And what's great is we're able to show that. I don't ever want to be gratuitous for the sake of being gratuitous, but when it serves the stories and serves the characters it's nice to be able to do that realistically and with credibility."

According to Chibnall, "you don't want to do it for the sake of it, and you don't want to shoehorn it in. But it's great. It's another good tool to have in the toolbox, he says, worried about his metaphors." (No doubt it's the writer in him who couldn't help but add that last part.)

The joy of Merlin

When it comes to playing Merlin, "I was tricked ... Chris told me that I'd be up for Guinevere," joked Fiennes.

"That's only because you wanted to play Guinevere," Chibnall added.

"Nothing could have prepared me for the fun there is to wield magic like Merlin does, and especially in the perverted mind of Chris Chibnall has given me lots of great rein on the dark side of those powers," said Fiennes. "And so that's been the joy. It's something very new to me, is wielding, not all the time, but at certain times, great magical powers."

There will be consequences for bad behavior 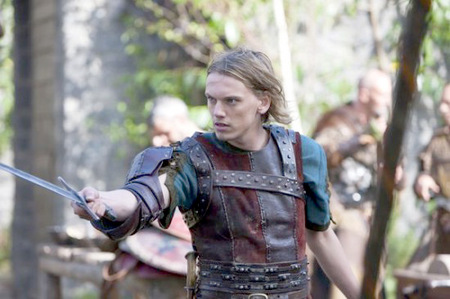 "The conversations that Joe and I had were absolutely not going for the kind of stock and perceived way of betraying Merlin, but more about asking, 'What does he want?'" said Chibnall. "Why is he so keen for Arthur to get to the throne? What has he seen? And then taking that, for example, and going, 'What will it be like to have [Merlin's] powers?' Because nothing really in life comes without a cost, and nothing comes without consequences."

For Chibnall, "The big thing was making sure that the show was full of character, full of emotion, and also that every decision and every action had costs and consequences, and then it could start to feel emotionally resonant to now."

Reinventing Camelot, warts and all

"I think the reinvention, and in particular in Camelot, is the sense that we're showing what everyone knows is an age of chivalry and knights and honor," said Chibnall. "But we're showing the people who are famous and icons in this regard. We're showing them warts and all. And I think that's the true gutsy reality."

Chibnall feels that what "makes it modern and stark is that we're [revealing] these wonderful characters, these heroic characters. But we're being shown all their doubts and faults and warts and nasty sides. And I think that's what really much more engaging than just a sort of the romp or the violence," he said.

"We're stripping the icons away," said Fiennes. "We're the sort of Wikileaks for the age that we're revealing with transparency of the characters. We're unearthing sort of the truth beyond the myth or underneath the myth."

"You have a king which would jump into bed with someone that's a betrayer to someone else, or you have Merlin who is taking a mother's child one or two days old and ripping it from her arms, barely out of her womb, and then stealing this boy to become a future king, with no sort of warning until the day has come," said Chibnall. "So there's these stark revelations. ... We're getting to see the faults and the true human conditions of these mythological icons, and they're being brought back to us in a very vivid, real sense."

Season one is all about baby steps 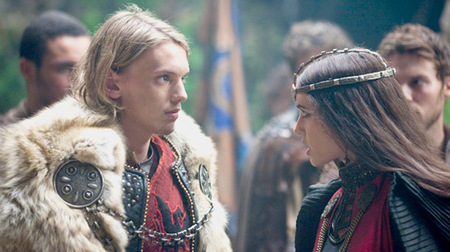 "One of the key things we wanted to do in the first season was really set the foundations," said Chibnall. "There's no rush with the story."

"We're taking baby steps," added Egerton. "There's so much. It's such an epic story, and there's so many twists and turns. This season only covers a very, very small amount of the story."

"You'll see a lot of the iconography this year. You'll see the lady in the lake. You'll see the sword in the stone. You'll see the very, very beginnings of a round table, right to the end," said Chibnall. "But this is really about bringing together the group of people and the building and some of the artifacts of what will become the legendary Camelot. ... Camelot as a great, glittering, golden place." This is "the story of how Camelot is built and earned and achieved through blood and sweat and tears and a lot of mud."

Morgan Le Fay of Starz's Camelot slayed with her witchy tricks
Review: Seeing an old wizard as a young man is just one of Merlin's many charms

Will you watch Camelot tonight?