Whatever you thought you knew about Stargate Universe, get ready for some big changes. While it's no surprise that last season's cliffhanger ending will be resolved eventually, there'll also be some game-changing events that take SGU in a new direction.

We chatted with executive producer Paul Mullie and SGU actor Lou Diamond Phillips, who stars as Col. David Telford, and they offered up eight spoilers (consider that a warning!) about the new season we thought you should know before tuning in to tonight's season premiere at 9/8C on Syfy:

All the major characters are coming back, but...

When last we saw the Destiny, things looked grim. With just about everybody either shot, trapped, captured and/or about to be roasted by the pulsar radiation burst, Rush was trying to wrestle control of the ship away from Kiva's Alliance commandos. So who will live and who will die?

"Everybody is coming back. That's not to say that there aren't consequences in store for some of our characters in season two, but pretty much everybody is coming back, I think. I mean, we left it as that classic cliffhanger type thing. ... Let's just say all of our regulars are coming back," said Mullie with a laugh. "I'm not going to talk about the guest stars, but definitely all the regulars are coming back." However, he admits, "there are some moments in the first half of the second season ... nothing is safe, let me put it that way." 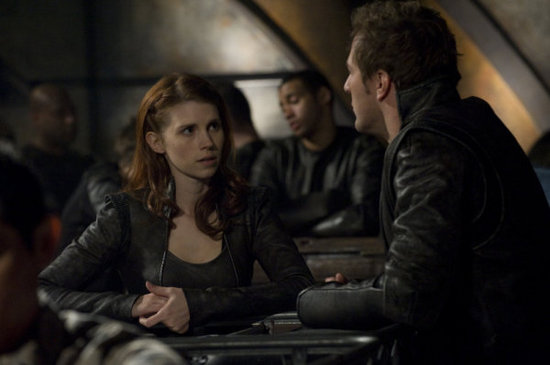 The Lucian Alliance will have an ongoing presence on the ship

"We have to finish off the events surrounding the Lucian Alliance attack on the ship and deal with their presence, because they do have an ongoing presence. We didn't want to just kill them all or just conveniently get rid of all of them. ... Some of them are around for quite a long time and become a part of the first half of the second season," said Mullie.

"Those are the three main sort-of Lucian Alliance characters that we get to know: Varro, Ginn, Simeon. It is fun, like I said, to have new people to create new problems and new relationships and put strains on old relationships and stuff like that," said Mullie. And expect Ginn to connect with Eli in a major way.

While SGU will continue to focus on character, there will be more action this year, said Phillips. "A number of the episodes have an increased amount of action in them. I think that there's a definite membership out there in fandom that will appreciate the action/adventure aspect of some of the episodes coming up. We blow a lot of s--t up," he said with a laugh.

And yes, they get into major firefights, too. "So I mean, that's always fun, the bang-bang. I mean, it's certainly something I've done my entire career in features and other things. So that's always fun, to get back and feel like you're an action hero," said Phillips.

"I will say that early in the season there is an episode that involves aliens. And I've recently seen it and was just amazed and thrilled about what [visual effects supervisor] Mark Savela and the effects team do. It's really, really beautiful to watch." 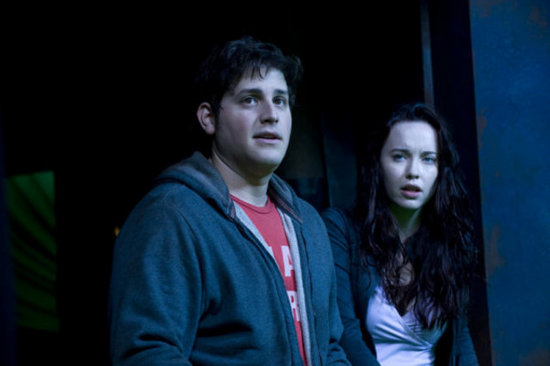 "Rush makes a discovery that is a million-year-old discovery in the ancient archives, which is the thing that motivated the ancients to launch the mission in the first place," said Mullie. "Rush eventually discovers what it was the Ancients were going to investigate in Destiny. It is kind of a big reveal moment in the first half. What we wanted to do was sort of get beyond just the idea of, well, we're just stuck here and can we get home, and start to get invested in the adventure itself and realize maybe there is something to being out here. Maybe there is a reason for us to be out here and there's something important that we have to do out here."

At the same time Rush figures out how to get more control of the ship. A big storyline that "plays out throughout the whole first half of the season is finding out a little more about the ship and gaining control over the ship. So exploring the ship, finding parts of the ship we haven't been to before and eventually gaining some measure of control over the ship ... that becomes part of the arc of the first half of the second season," said Mullie

The characters will still continue to do the wrong thing ... often

The complex characters will continue to stay complex, said Mullie. "I like that the characters are not necessarily going to do the right thing every single time. Nothing against SG-1 and Atlantis, but those people were superheroes, right? They're always going to be right. Like they made mistakes, certainly, and as those shows matured we started to do that more and more. But this is more a show about people who are bound to make mistakes because they're in circumstances that they're not prepared for, which makes it interesting, I think."

Telford is back, but he won't be in every episode

"I'm still technically a recurring guest star," said Phillips. "Without giving too much away, I mean I will be much more present in the second season. But don't look for me in every episode. ... The fact that we're going to see more of him, I'm actually very happy about, and we get a little bit more insight what makes him tick."

Camile Wray "becomes a bit of a confidant to him, because I think they both care very much about the welfare of the Destiny and how the decisions are made aboard the ship," said Phillips. Beyond that, "we'll see a side of Telford that we haven't seen yet, but it's all very true to the character and very layered into what we've seen of him before." 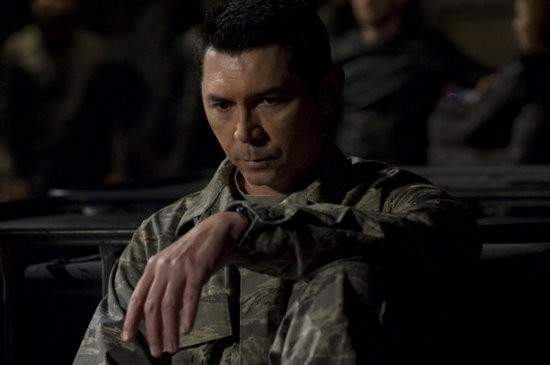 As for Telford and Young's relationship ...

In season one, their relationship was adversarial, said Phillips. However, "once he kills me and brings me back, that tends to change a relationship," he said with a laugh. He's speaking about the fact that his character was brainwashed by the Lucian Alliance and Young did what he thought he had to do to break through that brainwashing. And that meant actually killing him, if ever so briefly.

This season we'll discover that there's a history between these two men. "We get a sense of the fact that they were once friends, that they were in the academy together, that they had served together and have respect for one another as leaders," he said. "I think there's a window into that. And we see Telford sublimate himself to that. I mean the fact that he's, I'm sure, quite overcome by guilt for the things that he did that were beyond his control, he still has memory of them. And so it certainly affects how he approaches his position on the Destiny now."

That said, don't expect Telford to lose his cockiness. "That edge never really goes away. You know, I mean he does not 100 percent just bow down and say, 'You know what, I'm not worthy.' I still think he's got a very high estimation of himself and thinks that perhaps fate led him down the wrong path."

Atlantis characters will make an appearance later this season

Those communication stones will allow some of our favorite Stargate Atlantis characters to pop by. "That would be David Hewlett and Robert Picardo. It is hard to get them, because those stories have to involve the stones. They are also a double-edged sword, but they're fun and they're a good vehicle for our stories," said Mullie.

Check out a sneek peak below.

Michael Shanks dishes Stargate Universe, other projects
The Stargate franchise is the plucky sci-fi adventure we could all use right now

So are you going to watch Stargate Universe tonight?