The Predator is a noble hunter who challenges our deadliest earthly warriors to battle—and this summer, Predators challenges other summer movies to defeat its brawling alien action. The audience will be the final judge when Predators opens Friday, but here are a few things that might give it the edge.

Director Nimrod Antal, producer Robert Rodriguez and stars Adrien Brody and Walton Goggins spoke about the film on July 1 in Los Angeles. Rodriguez actually wrote a script for Predators when he first came to Hollywood. When they were finally ready to make the movie, he produced it for director Antal.

This time, eight humans find themselves in an alien jungle. Who will survive? Will it be the soldier? The convict? The Yakuza? You don't have to be a fan of the series to like those odds, but if you do love Predator, there are some treats just for you. 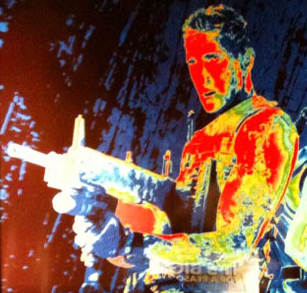 The Predator sees in heat vision so he can target his prey, whatever warm blooded living things stand out against the cold environment. You can't have a Predator movie without Predator-vision. If you've never seen a Predator movie before, Rodriguez makes it really easy for you.

"There's one Predator-vision I think we added early on in the film, only because we remembered not everyone who's going to see this movie has seen any of the other ones," Rodriguez said. "So you've got to kind of set the rules. We just kinda had to do that really early on just so people would know that's what they're capable of."

They'll make you feel for the big guy 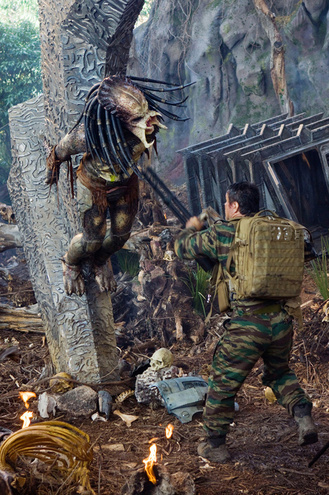 You may think Predator is this big scary monster who fights bodybuilders and aliens. Predators makes them vulnerable, too. The first time you see one, he's hanging from a post as a prisoner.

"That was in Robert's original draft, that crucified predator," Antal said. "That was the one thing I remember reading in the script and immediately just latching onto because we've built up this character so much. Now we're going to build up this film and all of a sudden you're expecting the predator to explode out of this, laser cannons flaring and spines being torn out, and the first time you see him, he's defeated. We almost completely demystify the character off the bat and humanize him a little bit."

It's better without an Arnold cameo

There was a rumor that maybe Predators would end with the survivors running into Dutch, Schwarzenegger's character, to join him as a Predator hunter. Spoiler alert, or rather non-spoiler alert, the governor did not take time off from running California to appear in Predators.

"We did entertain the idea of where could we place him," Rodriguez said. "But as we started putting the script together, it just really felt like we were making our own film and we thought let's not even bother with this. It was going to be sort of a nonstarter so we thought, 'Let's just make a really great movie and if it's received well, people want to see the sequel, maybe the sequel we can maybe ask him for a cameo.'"

Only real predators! No CGI! 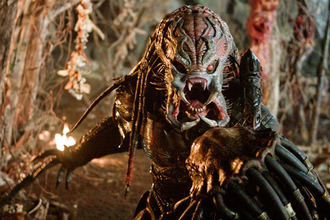 Predator was one of the last great full on "guy in a suit" monster movies. The late Kevin Peter Hall played Predator twice before he passed away. Even after two Alien Vs. Predator movies, there was pressure to make the monster CGI, but Rodriguez insisted on dudes wearing monster suits.

"The fact that it was a guy in a suit made it feel almost more human," Rodriguez said. "I think one of the reasons why we didn't go CG with predator at all was to keep that identification with the audience. I think that's what made him one of the great movie monsters, movie creatures and enduring creatures in movie history." 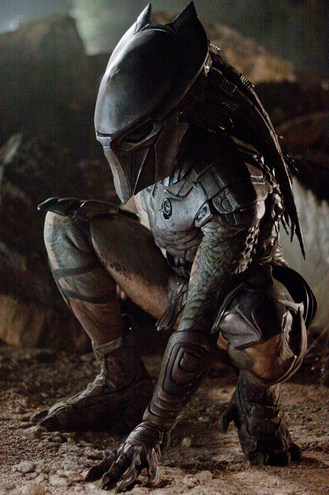 Predator was also a great hunter. He stalked armies in the jungle laying traps for them. Predators brings back the booby traps and hunting technique.

"Our society now hunts for sport which is almost disgusting compared to eating, feeding yourself, clothing yourself and what hunting was originally supposed to be," Antal said. "I think in our earlier conversations with Robert, there were a lot of things we wanted to incorporate. One was bringing back old school hunting techniques: driving and flushing." 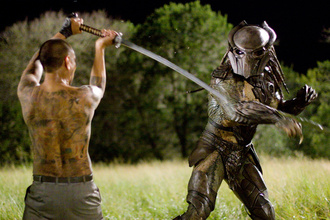 Remember that awesome scene in Predator when Arnold jumped from the waterfall? Predators has all eight humans going over the falls. Of course, they let the stuntmen do it and watched from below.

"We were looking at the stuntmen doing high falls," Goggins recalled. "Like an 80 foot fall off of a waterfall, and we had the opportunity to just jump in the water and come up out of the water as if we just made the fall. When we looked at each other we said, 'This is really happening. We are really characters in a Predator sequel.'" 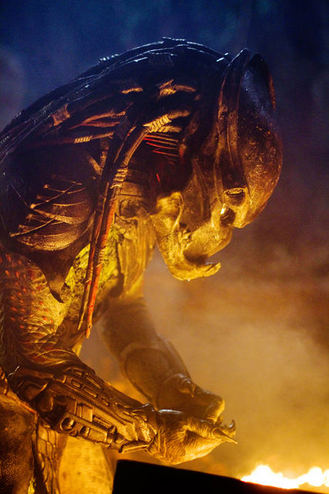 Brody played it straight though. "This is a man who has suffered tremendous loss both of his own soul and of people who were dear to him in the path to get to where his is," Brody said. "Being a survivor is a very lonely, very isolated place to be. It's you above anyone else and that is what he is grappling with. He has lost most of his humanity, but a little remains. For me, to squander it by goofing off would be a waste."

Buffed out hero covered in mud 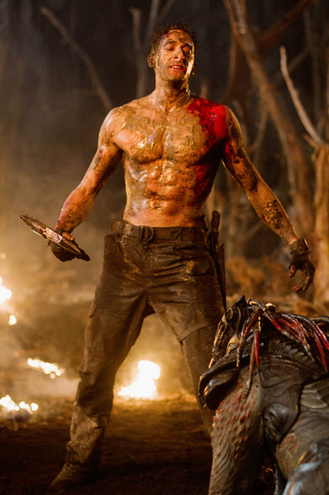 One of the most striking images from Predator was Arnold covered in mud, hiding from the Predator's heat vision. Brody ends up in the same situation, and he really did get massive. By the time he's all muddy, he really reminds you of Schwarzenegger.

"I had restricted my diet in a way, and kind of my lifestyle, in an effort to kind of harness everything that I had in my power to be ferocious and keep that contained," Brody said. "For the first time since college, I had lifted really heavy weights to put on size. I think that is a very different workout process that I'm used to, and that creates additional testosterone. Your body chemistry changes. I did feel like I had to make a physical transformation because I think on one level it is exciting for an audience to see that and I like to see that. I like to see, even if the character is villainous, a heroic character look strong, but I didn't want to rely on that transformation for me to convey what I feel is necessary in portraying a leading man in a film."