9 of the grossest, goriest X-Files creatures

During the 10 years The X-Files was on the air, we saw monsters in many forms. Some were ordinary folks (at least on the outside). Some where true demons (who weren't so bad on the inside). And some were a little bit of both. For the 15th of our 31 specials for the 31 days of Halloween, we're dredging up the series' most gruesome monsters.

(Possible spoilers ahead. Though, honestly—if you haven't seen The X-Files by now, even the bad episodes, there's not much we can do for you.)

Check back tomorrow at noon for another Halloween treat!

The Flukeman ("The Host") 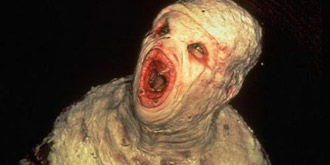 Most horror-movie and TV monsters attack from behind, usually accompanied by a shrieking violin. But nothing really redefines horror like being attacked from ... below. Flukeman, a super-evolved fluke worm, lives in the sewers and drainage pipes, and, well, you can't blame a guy for getting hungry, peering up the working end of a port-a-potty and seeing some fleshy buttocks to chomp on. Bathrooms are supposed to be safe havens, places to relax behind a closed door or in a latched stall. That will be your undoing as the Flukeman catches you, literally, with your pants down. 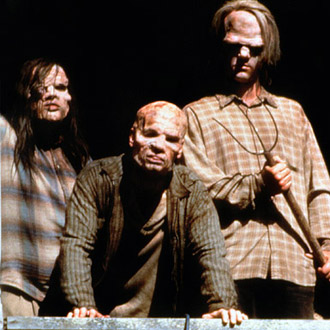 Inbred genetic mutants—is there ever a time they can't scare us? Sometimes they're outcasts because we shun them for their frightening appearances; sometimes they're outcasts because of their own misdeeds. Like inbreeding. And burying babies alive. Though you may not be terribly fond of your quadriplegic mother (gosh, how she nags!) ... you don't put her on casters and wheel her under the bed. Or, if you do, it's only because you need to vacuum. The Peacock Family caused The X-Files to run its very first pre-episode "viewer discretion" disclaimer. A true mark of quality in horror!

The Great Mutato ("The Post-Modern Prometheus") 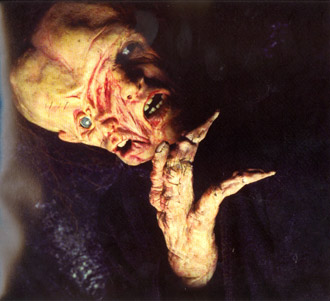 Joseph Merrick lookalike or Frankenstein's monster? He's big and ugly and two-faced (literally). But he's not a bad guy. He likes midnight strolls, has a comic book named after him, is a film buff (especially Mask) and thinks Cher is the bomb. He's just looking for love in all the wrong places as his father, the mad scientist (John O' Hurley, aka Mr. Peterman on Seinfeld), drugs women and allows Mutato to impregnate them. But it brings a smile to even the most hardened of X-Files fans to see the childlike Mutato doing double fist-pumps in the episode's denouement while Cher sings Marc Cohn's "Walking in Memphis." Technically, Mutato's a rapist, but since this episode is considered outside the show's continuity and Mulder breaks the fourth wall to change the ending—who's to say any of it really happened at all? 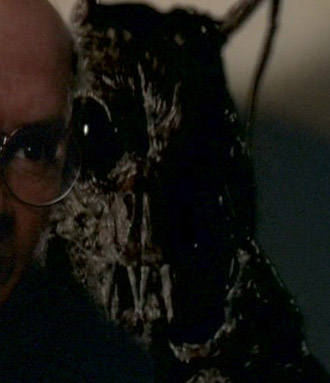 Two monsters for the price of one. A buglike predator turns TPS-reporting, office-space workers into zombies. Having worked in many offices through the years, I could say that this is redundant. Therein lies the metaphor, I suppose. Dressing up like the mind-controlling beastie from this episode for Halloween may prove problematic, since the insectoid is always "hiding in the light" and the zombies look like ordinary office workers for the lion's share of the time. 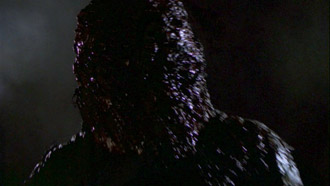 While it's well documented that girls are made of sugar and spice and everything nice, this monster-of-the-week is made of ketchup and dirt and motor oil and tissues and grime and grease and plastic bags and everything we discard. But it's doing its job of enforcing an idyllic community's homeowners' association rules, where everything has to be just so. It (he?) murders, but you can't blame it: It's only doing what its creator commanded. I'd like to borrow this guy the next time my neighbor doesn't pick up his dog's poop. Carry on, Mr. Garbage Monster. Carry on. 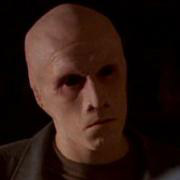 The man so nice they named him twice. He's afflicted with a very rare eating disorder. A tragedy, for sure. Of course, I'd feel more sympathy for his plight if he weren't always jonesin' for people's brains, sucked directly out of their heads with a proboscis-type oral extension. He has no hair (not too scary), no eyebrows (a little scary), all-black eyes (huh, whaddyaknowaboutthat?), no ears (what the?!), and tiny shark teeth (ZOMG!!). In an Overeaters Anonymous meeting, he describes the taste of his favorite dish as "kind of buttery." I really don't want to know if that's true. Personally, my favorite dish tastes "kind of like pizza." Different strokes for different folks. 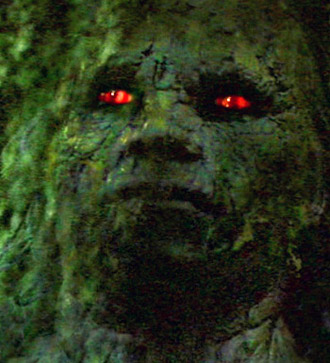 While in Florida driving to a conference, Agents Mulder and Scully stumble upon this particular X-File. These red-eyed creatures, thought to be the evolved descendants (or actual conquistadores) from Ponce de Leon's search for the Fountain of Youth (the episode never makes it clear), can hide in plain sight. And they're very forceful about protecting their home against encroachment. Invisible (or heavily camouflaged) monsters are the worst. They just POP up out of nowhere, leaving very little time to bar the door and grab the shotgun. 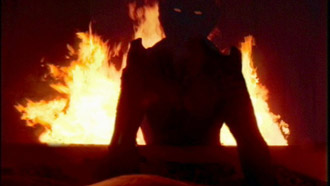 So the saying goes: Better the devil you know. Right? This episode gives us Bruce Campbell, a good-looking, nice-guy ... bigamist devil who is accused of harvesting his wives' unborn demon fetuses. But it turns out: He just wants a normal baby, a normal family, a normal life. In a classic, if somewhat off, twist: Betsy, one of his wives, had been self-aborting her own "normal" babies because she wanted a pink, chubby, horned demon baby. 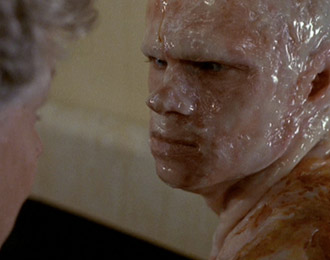 Paul McCrane plays a character who isn't making the best of his affliction. If he could've been open and frank about this desire, hunger, and need for eating people's cancer (which, in turns, feeds his own cancer-riddled body), I'm sure hospitals would pay top dollar for this EMT's ability to sniff out illnesses in an oncology ward. To say nothing of the fact that, as an evolved human who can grow back his own head ... modern medicine could progress by leaps and bounds by studying him. I'll always consider Leonard Betts the "real" Cancer Man. Why did he make our list of gruesome monsters? While not gruesome 100 percent of the time: His skin takes on a slick, disgusting appearance while healing, a cross between "amniotic-covered newborn" and "burn victim covered in Vaseline." And dude, he eats freakin' cancer!

And because you asked for him— 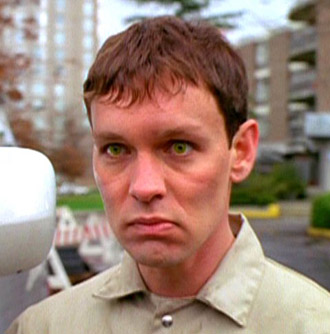 He's not just a fan-favorite: The X-Files writers loved him, too, proven by the fact that he's one of the few Monsters Of The Week who garnered a sequel episode. (We first see him in Season One's second episode, "Squeeze," then near the end of the same season in "Tooms.") Eugene Tooms (played by Doug Hutchison of Green Mile and Lost fame) is a genetic abnormality with the ability to fit his body into ridiculously small spaces. (Air ducts, chimneys, etc.) His MO is to break into people's houses or offices via these impossible spaces, kill them, and eat their livers. After he eats five livers (sans fava beans and a nice Chianti), he goes into a 30-year hibernation. Wake, rinse, repeat. He's been at it for 100 years or more. While not gruesome, per se (Hutchison's boyish good looks make him eternally innocent, or eternally creepy—your call), he does have a hidden nest made out of newspaper and saliva.