Angels in movies are infinitely more intriguing when presented as demonic hellions instead of white-gowned wonders. Time to pluck those platinum pinfeathers and collect everyone's golden trumpets. Enough is enough.

We can't accede to the notion of God's most exalted creatures, who breathe tinseled dreams and perch atop troubled shoulders, manifesting themselves on film as sweet, benign beings. Save that nonsense for Italian Renaissance paintings and gooey holiday carols. Give 'em liquor, guns and explosives and watch the celestial sparks fly!

Biblical references aside, our rowdy angels would blush in eternal shame if ever they graced the pages of Psalms calendars on price rollback at Wal-Mart. They exhibit malevolent tendencies while plotting private vendettas, rarely stopping to help build cathedrals, play baseball or reunite lost loved ones.

We prefer angels rough and raw, not marshmallowy-soft. In our twisted world, these mercurial messengers should be terrifying to behold, creations of such dazzling horror that one glimpse would turn secular retinas to crimson ash. Angels are luminaries from another realm who stand on legs of molten brass wielding transparent weapons of divine origin.

Hollywood may not be up to light speed yet, but until then, here are our top selections for coolest cinematic depictions from legions of infamous angels. 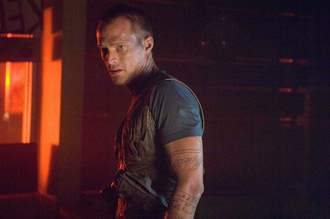 WHY THEY'RE SO UNANGELIC: Not a miracle in sight with this bleak, hyperactive rendition of Revelations. Angels punch, kick, kill and brutalize to bloody effect while lobbing the occasional F-bomb. Equipped with heavenly warclubs, broadswords, automatic weapons, rocket launchers and an exploding inverted crucifixion tossed in for good measure. 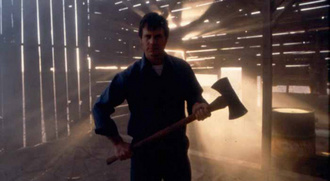 WHO: Shimmering, unnamed angel incites an unholy rampage. This unsettling plot of heaven-induced homicide deep in the heart of Texas is kept ablaze by one father's divine visitation. Underappreciated despite its savage realism and gut-wrenching morality. Blaming a kill-crazy slaughter on instructions from a nocturnal angel seems kinda convenient, but in this scenario quite true. The manifestations of these suggestive whispers form a horrifying treatise on the convoluted nature of evil angels intervening in earthly affairs.

WHY IT'S SO UNANGELIC: Murderous actions as a result of angelic hit lists bring a river of blood, ceremonial beheadings and righteous bludgeonings, all in the name of God. Not exactly your traditional uplifting angel pep talk. Bill Paxton, in his directorial debut, leads a clan of sons slaughtering demons in human form with an avenger ax named Otis.

WHO: Christopher Walken reigns as a gravestone-perching Gabriel in a groundbreaking portrait of tortured angels and their violent, unflattering intent upon our sacred soil. The film spawned two ugly sequels and a legion of low-budget copycats, all equally delving into the evolving mythology of bad angels with diminishing returns.

WHY HE'S SO UNANGELIC: Walken portrays the notorious archangel as a winged wise guy with pitbull ferocity, charismatic gusto and relish, hold the cheese. Sets the angel Uziel's body aflame with a simple dip of his index finger. Who needs matches? 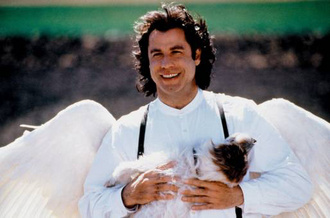 WHO: Travolta flashes his feathers and a megawatt smile as Michael. Yesteryear's images of sanitized angels are gone, thanks to this offensive concoction, delivering an overweight archangel with poor personal hygiene who lands in Midwest America to mend broken hearts, pursued by tabloid whores and their pesky paparazzi. 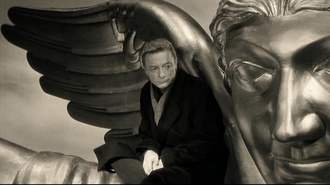 WHO: Damiel and Casiel, brooding uber-angels lurking around a monochrome Berlin, forever eavesdropping on bleak urban society and longing for transcendent love. Provocatively filmed in "Angel-View" black and white with dreamy color-tinted sequences, stripped of any cheap commercialism or syrupy New Age sentimentality.

WHY THEY'RE SO UNANGELIC: More oddly ambivalent than evil, Wim Wenders' somber angels are trench-coated observers in dire need of some Prozac. Weary, repressed and vulnerable to the flights and fancies of humanity. A depressing yet ultimately uplifting cocktail of existentialism and the perils of boredom. Doesn't heaven have YouTube yet? 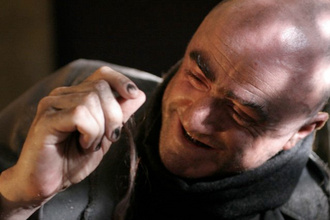 WHO: Gabriel, last of the archangels, battles for our immortal souls. Little-seen but atmospheric Australian indie-horror set in a decaying purgatory with arresting visuals and disturbing ideology. Pure unadulterated Goth steeped in sorrowful anger. Gabriel navigates past anguished wretches and fallen angels to a climactic showdown with Sammael.

WHY HE'S SO UNANGELIC: Angelic MMA stud Gabriel gangbangs his way through the haunted gauntlet, conflicted with the purifying light of duality, toting wicked weapons and a bad attitude. Angels with dirty faces, handguns and leather. Reanimates the dystopian filmscape of The Crow, riding the sordid tide of the evil-angel phenomenon.

WHY SHE'S SO UNANGELIC: Gabriel is sinister and hateful, trying to stab a possessed woman's belly with a spearhead before eventually having her wings incinerated off by Satan. Seethes with palpable malice barely concealing a secret agenda. Menacing enough to quickly gain expulsion from the pearly gates or most angelic charm schools. 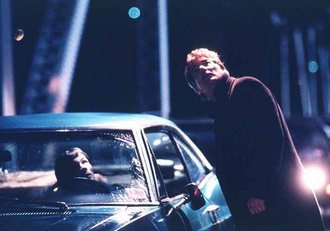 WHO: Clairvoyant angel-insect Indrid Cold predicts earthbound calamities. Based on real events, this film offers a plausible scientific solution to the unfathomable essence of angels. Malicious buglike apparitions are interpreted as natural occurring entities of the earth, lured to the chilled scent of disaster. Blends ancient myth with the Bible.

WHY HE'S SO UNANGELIC: No beatific presence allowed, ruby-eyed Mothmen terrorize humans through dire premonitions and lucid dreams, cause observers' eyes to bleed and victims to crash their cars and entertain suicidal thoughts. Not to mention the annoying prank phone calls. Demonic telemarketers? Stick 'em on a no-call list.

WHO: Generation-X angels Loki and Bartleby. Director Kevin Smith obliterates all preconceived notions of benevolent angels. Matt Damon and Ben Affleck play slacker angels banished from heaven to Wisconsin by a disillusioned female God. After discovering a loophole in Catholic doctrine, the pair of vengeful, sarcastic seraphim enact their escape.

WHY THEY'RE SO UNANGELIC: The pair of troublemaking, grunge angels talk a nun out of religion, shoot up a boardroom of sinful execs and menace humans with knives, guns and hockey sticks. Devoid of all halos, robes and stringed musical instruments, replacing them with genital-less, Versace-clad Metatron and a Golgothan demon made of feces.