Top 10 reasons why Star Trek is suddenly cool—plus the chart that proves it!

Who would have thought that Star Trek would suddenly be cool?

Used to be that if you referenced dilithium crystals, could utter the traditional Klingon greeting or knew the difference between a Romulan and a Reman, you were scorned and ridiculed and advised to move out of your mother's basement and get a girlfriend.

Well, no more. Like a time incursion that upends history, the phenomenal mainstream success of J.J. Abrams' new Star Trek movie (now the top-grossing film of 2009) has changed things. With the abruptness of a Vulcan nerve pinch, Star Trek is now hip. 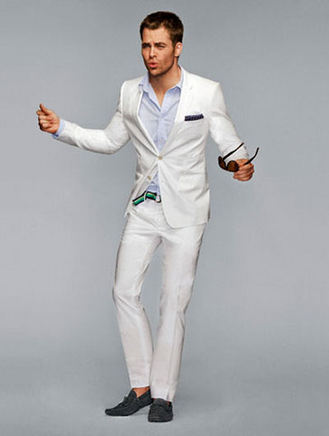 1. Star Trek is suddenly sexy, at least judging by the attention devoted to its cast in glossy fashion magazines and national publications. Eric Bana (Nero) can be found on the cover of Details. Chris Pine (Kirk, above) models suits in GQ. Zoe Saldana (Uhura) graces the cover of Women's Health. 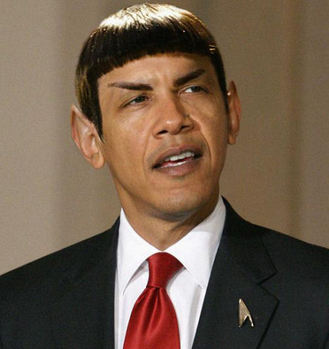 From The New York Times

2. President Obama, perhaps the coolest chief executive ever, orders a special screening of Star Trek in the White House. Obama himself is compared to Spock: multiracial, unflappable, supremely logical, really big ears. And POTUS himself admits to being a Trekkie: "I used to love Star Trek," he told Newsweek. "You know, Star Trek was ahead of its time. There was a whole—the special effects weren't real good, but the storylines were always evocative, you know, there was a little commentary and a little pop philosophy for a 10-year-old to absorb."

3. With a constellation of hot young actors newly inhabiting the bridge of the starship Enterprise, many celebrities are finally coming out of the closet, revealing their true Trek roots. They include Rosario Dawson, Megan Fox, Spider-Man's Kirsten Dunst (who actually appeared in an episode of The Next Generation) and even Tom Hanks (above, on the new Tonight Show; he talks about Star Trek at 3:15.)

4. Even manly men admit to being Trekkies, such as Karl Urban, the new Dr. McCoy, who appears on Access Hollywood explaining the genesis of Gene Roddenberry's original vision. Karl Urban! Who knew that Eomer was a Trekkie?

5. Footage from Star Trek was part of Andy Samberg's opening sketch for the MTV Movie Awards. That's gotta be a first. And did we mention that Chris Pine was one of the presenters? Or that he's dating The Hills' Audrina Patridge? When was the last time a Star Trek captain was gossip fodder?? 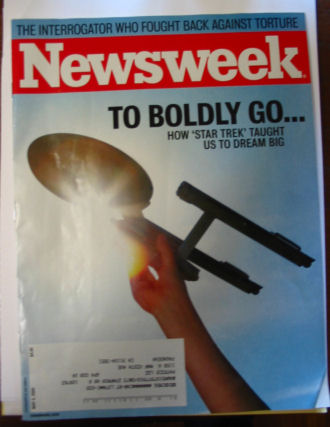 6. Star Trek is featured on the May 4 cover of Newsweek, which has a story: "We're all Trekkies now." "Star Trek is way cool. How'd that happen? Because the geeks have inherited the Earth and the White House."

7. Many longtime Trek fans, perhaps sensing that their playground is suddenly being invaded by the cool kids who tormented them for so long, have been openly rebelling against the popularization of their beloved franchise in the form of Abrams' movie (just read any of the many comment boards on SCI FI Wire for evidence). We're not the only ones to see this phenomenon: The Onion lampoons Trek fans' futile resistance in the video above. 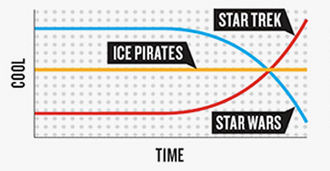 10. Star Trek is the top-grossing movie of 2009 domestically, at least until Transformers: Revenge of the Fallen opens this week.