9 reasons we can't wait for the return of Fringe

Last week, Fox gave us our last original Fringe episode until April 1, calling it a "Winter Finale," and we're more than a little pissed about it. Let's face it, Fringe is a series with heavy mythology that works better when it builds, and we already had a break for the holidays. It's been months since the last real mythological episode ("Grey Matters"), and Fox is making us wait yet again, not just until the Olympics are done, but until the reincarnation cop series Past Life finishes its run, too. And that just sucks.

In "Jacksonville," [**spoiler alert**] we finally got back to what former frozen severed head fellow Thomas Jerome Newton was up to, we finally got a chance to see more of Olivia's abilities, and we finally, finally got some definitive proof that Peter is from the alternate universe.

Despite that terrific episode, here are nine reasons we miss Fringe already:

With Olivia (Anna Torv) gaining the ability to see things from the other side as glimmery, and Peter ending up glimmering away at the end of "Jacksonville," we can't wait for this to play out. When Walter says, "Olivia, please don't tell him," our hearts broke just a bit. However, secrets always come out, and we know by the previews that once Fringe does return, this secret will be revealed and it's one that's likely to fracture Walter and Peter's relationship in the most fascinating and horrible ways. The promo above promises "Fringe returns ... to reveal their past ... and answer the questions ... of how it all began." 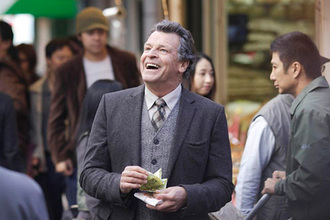 We love Walter, and Lord knows he's one of the most fun and likable characters on TV. But we're seeing cracks in Walter that we hope he can recover from. It's great character development, but we're not so sure we like it. There have been hints of what Past Walter was like popping up since the series began, but the last couple of episodes have delved into Walter in a way we haven't seen before.

In "The Bishop Revival," Walter actually killed the Nazi guy all on his own. It was a side of Walter neither we or any of the other regular Fringe characters have seen before and it was a bit shocking. I mean, we were happy the Nazi guy got it, and the writers wisely choose not only a mass murderer but also a freaking Nazi as his target. But still, Walter of the present is supposed to leave the killing up to others, and the look in Olivia's eyes said it all. And then in "Jacksonville," after submitting herself to one of Walter's experiments meant to jog her ability to see things from the other side, Olivia's damning indictment, "What the hell is wrong with you? You did this to little children?" was devastating, judgmental and oh, so right.

Does his experiments on people, and especially children, make Past Walter evil? And if so, is Evil Walter just waiting to bubble up again?

3. Firestarter Olivia and her superpowers 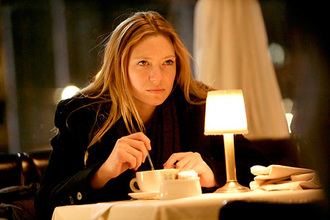 Last season, Olivia managed some mental superpowers that saved the day, once again when lives were on the line. In "Jacksonville," Olivia learned that when she was a child she could start fires with her mind and see objects from the alternate universe as glimmery. She's able to manifest the ability again just in time as an adult to save a hotel full of people, but at the price of instantly learning Walter's secret that Peter is from the other side, too. Hopefully the writers won't put Olivia's powers on the back burner again and we'll get to learn more about what makes her tick, superhero abilities and all. 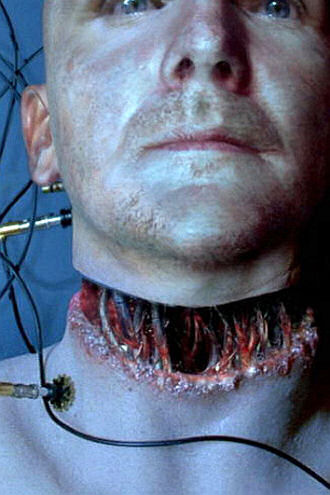 Despite having a heavy presence in "Jacksonville" via his offscreen actions, Thomas Jerome Newton (Sebastian Roché) was long gone. We like any guy who was a frozen severed head at one time and has managed to come back and have exceptional Big Bad potential. We're sure he'll pop up in future episodes, and we can't wait to see him and Olivia go at it again, especially considering that last time he forced her to choose between saving Walter and capturing him. Even though we haven't seen him yet this year, we know great things will come from their rivalry. One little thing, however ... We'd also like to know what the heck the whole frozen severed head thing was about. It was a cool (pun intended) way to go in introducing the character, but the writers really need to explain why they went all frozen severed head on us.

5. The Broyles of it all 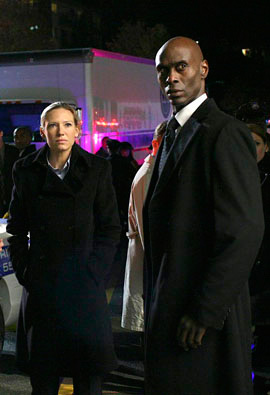 Agent Phillip Broyles (Lance Reddick) is a fascinating character who's ended up being little more than an infodump now that Charlie is dead, and the writers should be ashamed of themselves. While we never really bought the whole Broyles/Nina Sharp romance, at least it gave Reddick a little meat to play with for his character. Reddick is a fabulous actor, and we'd personally like to see him and Walter dealing with each other for an episode, with Olivia and Peter hanging back for once. So writers, please STOP WASTING BROYLES and let this actor explore his potential! We're waiting.

6. The Real Observer and Shapeshifting action 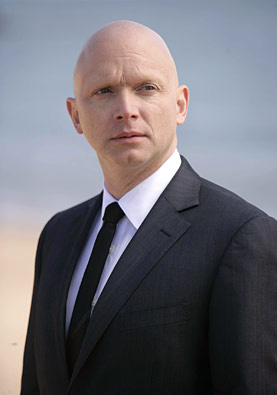 We've seen from the promos that the Observer is headed back our way, and we're hoping that it's Michael Cerveris' Observer. It looks like him, but it's tough to tell for sure. Yes, all those other Observers opened up a world of questions for us in "August," but we've grown fond of Cerveris' Observer. So bring him back and give us more Walter/Observer scenes. And speaking of strange and freaky things, we'll take some more shapeshifting action. While we know Newton is the big cheese now, those mercury-filled soldiers from the other side gave the Fringe team and us something to think about.

7. The other side of Nina Sharp and William Bell 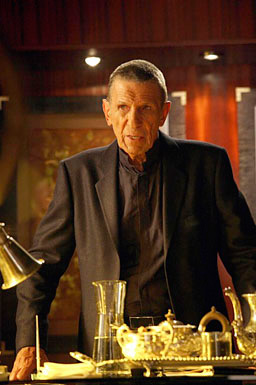 Fringe has nothing if not some great actors in supporting roles, and Blair Brown's Nina and Leonard Nimoy's William Bell are captivating characters in their own right. The story explodes forward whenever William Bell pops up, and Nina Sharp is as much an anomaly as anything Star Trek ever faced. However, the fact that they are embedded deeply in the central alternate universe story means we wait to see them again. 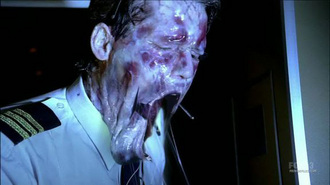 In "Jacksonville," the Fringe writers came up their best deaths yet, when a building from both universes collided (with a little help from Newton). The people inside also appeared to have collided with other versions of themselves. The one man inside who's survived the catastrophe ended up with multiple arms and legs, not to mention a beam running through his shoulder. As he dies, they discover another not-quite-dead head in the middle of his torso.

No one kills people in more bizarre, inventive and shocking ways than Fringe. It's like when Olivia asked Walter if the molecule-rearranging of the victims of the building collision could have happened naturally, and Walter said, "Oh, it's possible. But if so, God has a far more disturbed sense of humor than even I could have imagined." Well, maybe not God, but certainly the Fringe writers do.

9. The Our Side/Their Side War 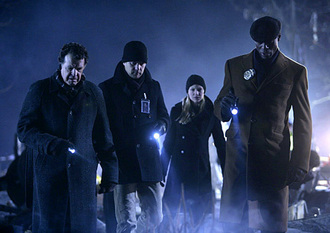 We've been teased with double-decker cars, real coffee shortages and a very different 9/11. And that was only in "Jacksonville." From shapeshifting soldiers to colliding snow globes, we want to know where this story is going. Of course, we don't want the writers to answer all the questions, and we have faith they have more up their sleeves beyond an endless war between Newton and the Fringe team. But there's no guarantee Fringe will get another season, so we'd love to see things come crashing together in Fringe's finale in the most bizarre and extreme and satisfying way possible.

Luckily, the writers still have eight episodes left to satisfy our desire for a return to the freaky and wonderful world of Fringe. Now, if only we didn't have to wait until April 1 for more!

How do you feel about Fringe and the unbearable wait until its return?

For the latest sci-fi news, follow us on Twitter at @scifiwire
Tag: Fringe
Close Search Return to SYFY homepage.