9 secrets from the set of Caprica

We stopped by the set of Caprica a while back to chat with the actors and brought back some tidbits for you to chew on as the show prepares for its first new episode this Friday. (Spoilers ahead!)

♦According to Paula Malcomson, Ron Moore is just as crazy as Deadwood creator David Milch, he just doesn't show it. "Dave is outwardly insane, and Ron is inwardly insane," she explained.

♦Malcomson also revealed that her character, Amanda Graystone, was originally supposed to have an affair, but that storyline got cut because they thought it would be more interesting for her to work through the death of her daughter via her 20-year relationship with Daniel Graystone (Eric Stoltz). "We just found that more exciting," she said.

Important Toy News: Heroes, horror, and Battlestar Galactica are the hottest in collectibles this week
20 gay characters we love from sci-fi movies and TV

♦Anything interesting we should know about Sasha Roiz's character, Tauron mafia enforcer Sam Adama? "Sam's gay, and he's married. I think it's great, because in Caprica there isn't any prejudice or stigma attached to it." 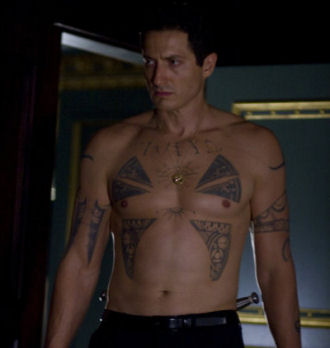 ♦What language do the Taurons speak anyway? According to Roiz: "It's ancient Greek. Obviously."

♦The biggest challenge for Alessandra Torresani? "It's the first role that I've actually done as a brunette. That's not a big deal to you guys, but trust me it's a huge deal to me. I'm used to being the silly blonde. I could get away with doing anything."

♦How does Esai Morales (Joseph Adama) feel about following up one of the most acclaimed sci-fi series in history, Battlestar Galactica? "It makes you really care to get things right." 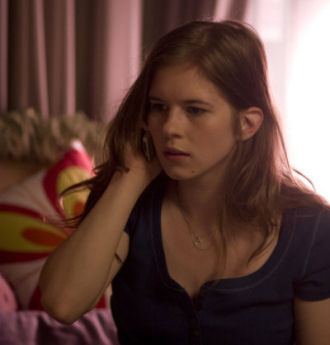 ♦So what did Magda Apanowicz (Lacy Rand) think of Battlestar Galactica? "I was just blown away. I had no words for it. I was amazed, and I just wanted to be part of it."

♦Why did Stoltz end up on a TV show when he's already a movie star? "I wasn't looking to do a series at all. I was just taken in by the story and complexity and the richness of the characters."

♦What would Stoltz do if Caprica's holoband existed in real life? "Every possible thing." When prompted to elaborate, he quipped, "Whatever your sickest fantasy, you'd see me there."