A comprehensive timeline of virtual reality up to Ron Moore's Virtuality

The New Shorter Oxford English Dictionary defines "Virtual Reality" as "the generation by computer software of an image or environment that appears real to the senses."

Science fiction geeks define it as "that thing I want NOW!"

With the advent of Ron Moore's VR-themed Virtuality looming, we thought we'd immerse ourselves into a look back at the almost-80-year history of VR, both as a sci-fi concept and as a real technology.

1932
Aldous Huxley, in his novel Brave New World, parodies that screwy ballyhoo-y Hollywood, and especially the advent of the talkies, with "the feelies," multisensory movies you watch by gripping two prongs that zap you with the neural sensations of the characters.

1950
Ray Bradbury publishes "The Veldt" in The Saturday Evening Post. It's widely read as a critique of the advent of television, about a high-tech nursery that "babysits" amazingly creepy kids through the artificial re-creation of environments like Africa ... where there are lions.

1960
Telesphere Mask patented by Morton Heilig, a documentary filmmaker and inventor ... a TV set that you wore like a cubist Lone Ranger mask made by an eighth-grade metal shop class. It provided 3-D images and stereo sound. 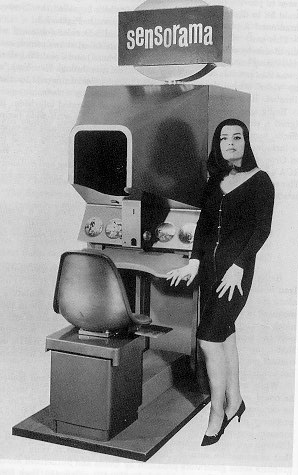 Late 1950s, early 1960s
Morton Heilig builds on the Telesphere Mask by developing and patenting the Sensorama Simulator, a gizmo that simulated 3-D vision, vibration, movement of air, sound and vibration to the point that users can take a virtual motorcycle ride through New York, even smelling the aromas wafting from food carts they zoom past. ↑

1961
The Philco Corporation creates the Headsight, an HMD (head-mounted display) that was intended to be used via closed-circuit TV in a way that allowed the user to change the angles and direction of the cameras by moving his or her head.

1964
Science fiction writer Daniel F. Galouye publishes Simulacrum-3, a pretty vicious attack on consumerism in the form of an artificial world created and stored on a computer so that corporations can save money on opinion polls by having a ready-made populace that they can just read. Things get dicey when these "people" become self-aware—but are unaware that they live as electronic impulses.

1965
The Three Stigmata of Palmer Eldritch by Philip K. Dick is published, about a collective hallucination (sort of like American Idol taking over your whole cerebral cortex) in which people who partake of a product called Can-D can "translate" into virtual analogues of Ken- and Barbie-like counterparts. ↓ 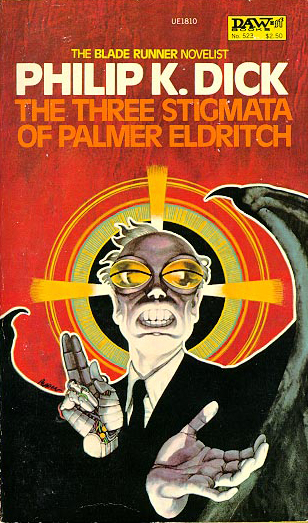 1968
Ray Bradbury's "The Veldt" is adapted in Jack Smight's not-as-bad-as-a-lot-of-people-say-it-is film version of The Illustrated Man.

1968
Philip K. Dick's Do Androids Dream of Electric Sheep? is published, in which people use "empathy boxes" to relate to and feel the plight of Mercer, a messianic figure who is pelted with stones as he climbs a mountain.

1973
Star Trek: The Animated Series features a forerunner of the holodeck in the form of what's called simply "the rec room."

1973
Happy-go-lucky wunderkind of New German cinema Rainer Werner Fassbinder, known for Capra-esque knee-slappers like Ali: Fear Eats the Soul and Fox and His Friends, makes the TV miniseries World on a Wire (Welt am Draht) for German TV, based on Daniel F. Galouye's Simulacrum-3.

1976
The most totally excellent Doctor Who serial "The Deadly Assassin" is broadcast, in which the Doctor (Tom Baker) enters The Matrix (!?), a vast computer network containing the collected knowledge of the Time Lords in which "reality" can be altered by force of will. ↓ 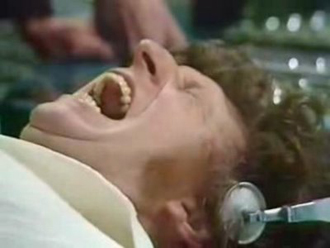 1977
Release of the movie Welcome to Blood City, a Westworld riff without androids, in which a group of people wake up in an Old West town (called Blood City, natch!) and must fight to survive, not realizing that they're stuck in a computer simulation.

1978
Andy Lippman's team at MIT (forerunner of the current Media Lab) create the Aspen Movie Map, a 3-D walking tour of the city of Aspen using Old Skool analog technology like the laserdisc.

1982
Steven Lisberger's way-ahead-of-its-time TRON is released, about a programmer (Jeff Bridges) zapped by laser into a computer mainframe, and featuring now-primitive-looking computer graphics that are still kinda awesome.

1983
David Cronenberg releases Videodrome, which, aside from dealing with the ways in which media alters human perception, features a subplot in which a very jangled James Woods uses a VR device while his nervous system is being rewritten by sinister TV signals: LONG LIVE THE NEW FLESH! ↓ 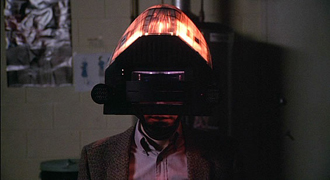 1984
William Gibson changes the syntax of the genre of science fiction by publishing Neuromancer, in which humans jack directly into cyberspace.

1987
The great ABC TV show Max Headroom airs, building upon the also-great BBC made-for-TV movie Max Headroom: 20 Minutes Into the Future, about an artificial intelligence auto-generated from the noggin of an injured TV newscaster ... a show that was better SF than a lot of the Gibson knockoffs published around the same time. ↓ 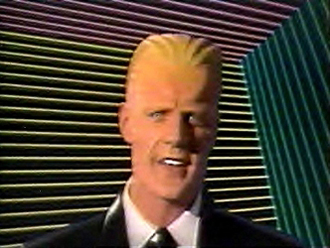 Mid-1980s to1988
Warren Robinett teams up with NASA scientists Scott S. Fisher and Michael McGreevy at NASA's Ames Research Center to create Virtual Environment Workstation (VIEW), a VR system prototype that allows users to "grasp" items in a digital space through the use of special gloves and that uses materials bought off the shelf, like a motorcycle helmet and a Watchman TV.

1988
Fakespace, also at Ames Research Center, builds a telepresence camera system for the Virtual Environment Workstation (VIEW) called the BOOM (Binocular Omni-Orientation Monitor), a system that uses mini-monitors mounted on a mechanical arm hooked up to monitors that the user peeps through as if looking through binoculars--the point of view changes as the mechanical arm is moved.

1988
Star Trek: The Next Generation introduces the concept of holodecks into popular awareness while at the same time providing premises for a bunch of wicked lame episodes (not counting the Peabody-winning "The Big Goodbye," of course).

1988
Years before WarCraft and Second Life, Red Dwarf presents the idea of an immersive game called "Better Than Life," in which players' deepest wishes come true, leading to Rimmer's anxieties ruining his, and everyone else's, cyber vacation.

1992
Brett Leonard's The Lawnmower Man, nominally based on a Stephen King story (he rightly sued to have his name taken off the credits), is a bizarro splice of Flowers for Algernon and Max Headroom in which a mentally challenged man is given supervillain powers by interfacing with VR programs.

1992
Red Dwarf's pivotal "Back to Reality" episode, in which our heroes discover that the previous seasons of the show have just been part of a VR simulation, the "Red Dwarf Total Immersion Video Game."

1992
Neal Stephenson publishes Snow Crash, a big fat novel that features the Metaverse, in which people move as avatars interacting with other people's avatars and software-based agencies. ↓ 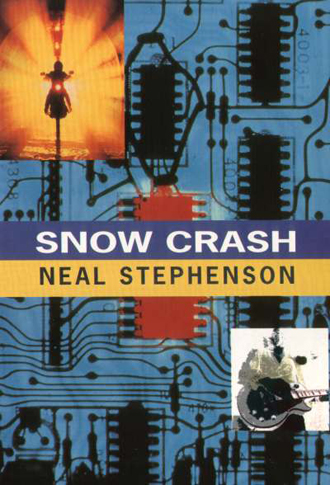 1993
Red Dwarf's "Gunmen of the Apocalypse" episode, in which the mechanoid Kryten gets a dose of an alien computer virus that traps him in a Wild West scenario; his shipmates use a VR machine to enter the android's silicon-based hallucination.

1993-94
James D. Hudnall and Andrew Paquette release the bitchin' Harsh Realm comic book, a hard-boiled pub about a two-fisted PI named Dexter who tracks a missing kid across Virtual Realities owned and created by a corporation that's a kind of digital travel agency.

1994
The CGI ReBoot TV show premiers, about a virtual place called Mainframe in which characters exist in video games seen and experienced from within individual "gamescapes."

1994
Michael Crichton publishes Disclosure, a drama in which a high-tech executive uses VR technology to build a countersuit against a woman who has brought sexual harassment charges against him. 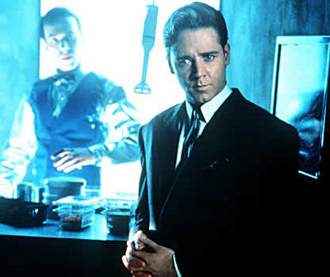 1995
Brett Leonard returns to cyberthemes with Virtuosity, in which Russell Crowe plays a VR composite of 183 serial killers trying to break into our real world. ↑

1995
Kathryn Bigelow's Strange Days, featuring a device that records neurological information of one person that can be played back directly into the cortex of another person.

1995
The short-lived show VR.5 airs, about a woman (Lori Singer) who can enter a level of virtual reality that allows her to interface with the subconscious of other people, allowing her to influence their minds.

1996
Future Neo Keanu Reeves stars in Johnny Mnemonic, based on a William Gibson story, which features a bit in which Johnny, a courier who carries digitized information in his head, jumps into cyberspace to manipulate information using special interfacing gloves.

1997
The Outer Limits episode "Bits of Love" airs, in which a guy, possibly the last human alive, tries to fight crushing loneliness by interacting, and falling in love with, CG hologram analogues of real people.

1998
Tad Williams begins his four-book series of Otherland novels, in which people jack directly into computer networks to the extent that the real world and cyber world bleed together. 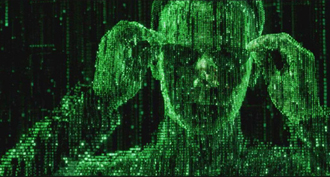 1999
Time to take the Red Pill ... the Wachowski Brothers' The Matrix is released, a cyberpunk VR film that was actually made by people who read cyberpunk VR science fiction. ↑

1999
Cronenberg revisits Videodrome's themes in eXistenZ, about a VR game designer who is the target of an assassination attempt and who must enter her own VR creation without complete certainty where the game ends and reality begins.

1999
Chris Carter's TV show Harsh Realm airs, taking huge liberties with the comic book and turning the premise into a VR take on Heart of Darkness, with Terry O'Quinn acting like a Mr. Kurtz knockoff in a digital, post-apocalyptic riff on Conrad's Congo.

1999
Another version of Daniel F. Galouye's Simulacrum-3 is released, in the form of The 13th Floor.

2001
Tom Cruise and Cameron Crowe give us a remake of Alejandro Amenábar's Open Your Eyes in the form of Vanilla Sky, which features technologically induced lucid dreaming.

2002
The revamped Twilight Zone episode "Sensuous Cindy" airs, about a guy who gets a very determined VR girlfriend.

2003
Linden Labs releases Second Life, a virtual world in which people as avatars can interact with other people's avatars. 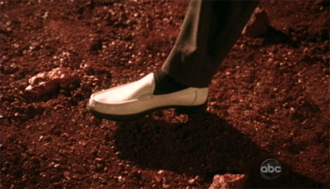 2009
ABC's riff on the BBC's show Life on Mars airs, with its rather cheesy final reveal that the whole show has been a VR simulation without a smidge of the impact that the same revelation had in Red Dwarf's "Back to Reality." ↑

2009
The Battlestar Galactica prequel Caprica arrives, which features, as a possible kernel of the Cylon/Human War, a VR club full of dancing teens ... leading to questions about the humanity and purpose of Zac Efron on this world.

2009
Ron Moore brings us Virtuality, an SF movie that had been the pilot of a show that was to be the followup to BSG, about people on a 10-year voyage to another star system who alleviate the boredom by entering virtual worlds. ↓ 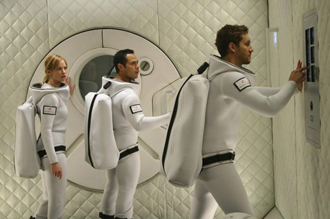 2010?
Microsoft's Project Natal scheduled, an Xbox interface that will, supposedly, allow people to use their bodies as game controllers ... Holodeck 1.0 for the real world, if Microsoft's hype is to be believed, or a nightmarish application of street-corner mime skills to high technology.

How Life on Mars lost its way with a misguided series finale
In a Martian oxymoron, icy clouds could have kept the Red Planet warm enough for life to thrive