A direct image of DNA, captured through an electron microscope

There are some things we think we'll never really see with our own eyes, and then someone comes along and finds a way to show them to us anyway. For most of us, DNA exists only as a colorful diagram in a biology textbook. But now, thanks to a new scientific technique, we can see the real thing.

The image above was taken with an electron microscope by a team at the University of Genoa. It shows a single thread of DNA stretched across silicon nanopillars. In what the team called an "experimental breakthrough," they were able to isolate strands of DNA by designing the nanopillars to cause liquid to evaporate quickly from the surface, leaving behind the DNA. The team then drilled microscopic holes through the silicon and beamed electrons up through them to increase the resolution. The result is a landmark photo.

Could a super-fish with regenerative powers help humans regrow lost limbs?
Stone Age man’s face reconstructed 8,000 years after his head was mounted on a pike

Previous images of DNA relied on x-ray crystallography, which essentially showed us x-ray deflections off the DNA itself. It's an image, but not a direct one. This marks the first time anyone's ever been able to show what DNA looks like directly.

And if that's not mind-blowing enough for you, here's a close-up of the strand that allows you to make out the (somewhat fuzzy) base pairs. 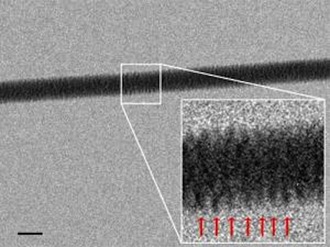 In a paper published in the journal Nanoletters, the Genoa team notes that the image is important not just because it's cool, but because this direct imaging technique will give scientists a better understanding of the behavior of DNA up close, something previous image rendering techniques simply couldn't do.

"Direct imaging becomes important when the knowledge at few/single molecule level is requested and where the diffraction does not allow to get structural and functional information."