Apparently, Michael Caine and Ray Winstone are heading up the cast of Henry5, a sci-fi take on Shakespeare's classic historical drama. Where the heck do we sign up?

Details are a bit sketchy on Henry5: This particular band of brothers includes Caine, Winstone, Vinnie Jones, Gerard Depardieu and Derek Jacobi. It's being directed by Michael Anderson, who's been a cinematographer on a host of ads done by Ridley Scott Associates, and it'll touch on the events of both Henry IV and Henry V.

"In an age of apocalypse, in a land without a leader, a dissolute prince finds redemption when he crushes a rebellion that threatens to destroy his father's kingdom. But upon assuming the throne himself, he immediately engineers a war against a neighboring state to slake his lust for power.

"Despite his enemy possessing weaponry rendering their forces almost invincible, the newly crowned king seizes a glorious victory from the jaws of defeat by ruthlessness and cunning. But for all his wiles there's one thing the young monarch has overlooked. Just as he's prepared to do whatever it takes to ensure victory, so is his enemy ... " 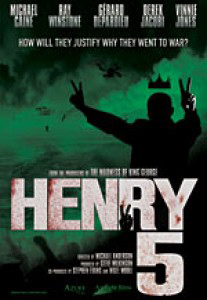