Why dreaming up Chuck's finale gave the creators a 'panic attack'

It's been one long roller coaster of a ride for fans of NBC's Chuck, the perennial bubble show that's managed to survive through five seasons and 91 episodes. However, tonight—in a big two-hour, two-episode finale—we finally say goodbye to Chuck, and co-creator and executive producer Chris Fedak and actor Adam Baldwin promise the finale is going to be big and satisfying.

"We have essentially an epic finale for you guys, and it's going to be different than anything we've ever done before on the Chuck show," said Fedak. "We knew that we were building toward our final episode, and we really wanted to put together something special."

The two-episode finale begins with "Chuck Versus Sarah" and then ends with the appropriately named "Chuck Versus the Goodbye." "Everything is at stake. It's like all of our characters are at a crossroad, and it's going to be interesting to see how it all falls out. But it's definitely the biggest thing we've ever done on the Chuck show," said Fedak during a conference call with Baldwin, who plays John Casey.

So far this season, Chuck and Sarah have started their own spy firm, a faulty Intersect has caused problems for Morgan and Sarah, and Casey's gotten a major love interest in the form of Gertrude Verbanski (aka Carrie-Anne Moss).

As for tough guy Casey, "there's some resolution there with his relationships that comes into play, which I found very heartwarming and dangerous at the same time," said Baldwin. "So I appreciate it, but that was the thing about Casey. The biggest challenge for Chris and the writers was to keep him dangerous while at the same time being lovable. And I think they walked that fine line." 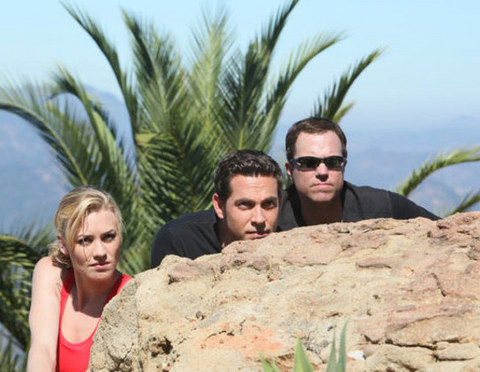 The other fine line the writers walked dealt with Chuck's constant struggle to stay on the air, and their habit of creating season finales that teased what a new season might offer ... if they managed to get picked up. "All the finales that we've built, therefore, we were hoping to come back. And so we wrote them in such a way that they implied a big new season coming next year or in a few weeks," said Fedak.

"And this time we knew that this was going to be our final episode. When NBC picked us up, they were very clear that this was going to be a 13-episode run and that this would be our final season. So when we started working on the finale, when we were writing it, it was much more like 'This will be the final chapter.' This will be the final moment of this show, and we need to resolve these stories that we've been working on for five seasons now. And the finale isn't so much a finale just for season five. It's a finale to five seasons of the show. So it's definitely different," he added.

While co-creators Fedak and Josh Schwartz have been at the business of writing those seasons of Chuck since the beginning, don't think that coming up with the perfect finale was easy.

"It was a panic attack on a daily basis, because knowing with the size and the scope of five seasons of the show, there were many days where it was hard to even look at the board in the writers' room and then to consider the page. But it was something that, when we finally cracked the story ... it was a big moment, and there was a lot of emotion involved in a process that's usually pretty solitary," said Fedak.

According to Fedak, the finale definitely answers "a lot of the character stories that we've been building for five seasons. Everyone in this finale is going to be forced to make a decision in regard to what their future is going to hold and what have they learned over the past five seasons of the show. And so the finale answers those questions. It's about where we're going to finally land with these characters and what they've discovered. I think that if you look at the finale, the first hour is very much about season five, and then the second hour is very much about the show as a whole."

And regarding that very last moment of the series, "it was something that we came up with at the end of last season, and it was a part of our pitch to NBC for bringing us back. And so this year we knew we were heading toward this final moment of the show, and so that was a year in the making." 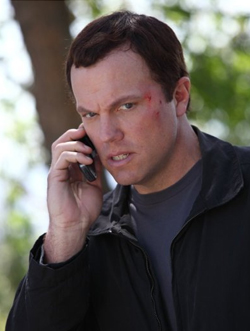 As far as the filming of that big finale, "there were a lot of tears, a lot of emotion. I didn't cry, but I watched a lot of other of the younger people cry, being the cold-hearted bastard that I am," joked Baldwin. "It was uplifting and bittersweet, and yet it was a sense of accomplishment, because we had, against all odds, persevered and been lucky enough and had the good graces of the network and the sponsors to keep us going. And Chris can tell you the backstory more than I can, but that was the sense on the set day in and day out, was just that we made it five years when we didn't even think we were going to make it past the first season, let alone get picked up as a pilot. So while there were a lot of tears, they were tears of accomplishment and of a job well done."

"I agree with everything that Adam just said, and I would also say that the tears were a real disaster," said Fedak. "There were people crying for everything. You know, people would type into a computer. It would be the last time they were typing into a computer, and they would start crying. So it was an emotional shoot. Thankfully we had the rock that is Adam Baldwin, who doesn't have emotions, and we were able to do some scenes without constant crying."

While some fans will certainly be crying at the thought of a television world without Chuck, Fedak and Baldwin both feel that they got to do most of the things they set out to do with the series.

"But 91 episodes really gave me the opportunity to write a bunch of different types of things. I think that there was always a chance that if we could have had more money and more time then we could have built out action sequences into some bigger things," he added. "But I think that the most important thing for me was that we were able to do a lot of the character stuff that we had planned to do. The Chuck/Sarah relationship. And if we hadn't been able to do any part of that, Chuck and Sarah getting married, hooking up ... Adam and Mckenna—Mckenna is [Casey's daughter] Alex—that would have been really disappointing to me. So in some ways it's like I'm excited that we were able to do all of the big emotional stuff that we wanted to do." 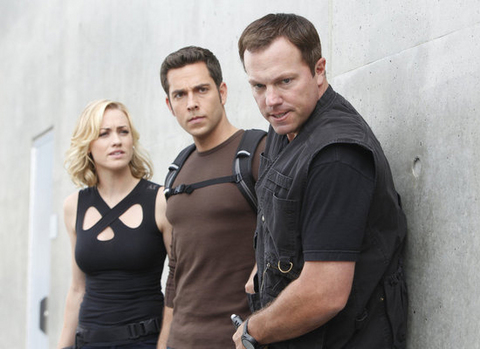 "Now, Chris, this is just fantasizing, because there's that 91 number. Had we gotten a back nine order and gone on to 100 episodes, would Alex and Morgan have had a kid, and would they have then made grandpa Casey? Because if that's the case, I would prefer that you just kill me," joked Baldwin.

"No, I don't think we're going down the grandpa route quite yet. I think that would have been a little fast for us. But killing the Casey character, that is something Adam and I have argued about quite a bit. But maybe we shouldn't talk about that, because the finale's still upcoming," said Fedak. "Now thinking back, if I could have done one thing over again I think we would definitely have had to have gotten Casey into a Speedo."

On the flip side, what about things the pair wish had NOT made it into the Chuck show? Are there any of those?

What Baldwin will elaborate on is how he feels about saying goodbye to John Casey. "Well, I think it's fair to say that while I will miss Casey, he was a fully developed character that got five whole seasons and 91 episodes to arc through. So, again, I go back to the sense of accomplishment with him. So I would say that while I will miss it, I won't miss it as much as other characters that have been short-circuited I would have liked to explored further."

As for Fedak, he wouldn't have minded exploring what it would have been like to have Chuck be "a giant successful blockbuster show. If we had the opportunity, it could have been easier for us. If we had like a giant rating and it was always obvious that we were going to be coming back for another season—there's benefits to that that we were never really allowed to enjoy in regard to how the show worked," said Fedak.

However, he admits there was a benefit to being on the bubble. "We told a lot of story. We never held anything. We always were ready to throw the kitchen sink or whatever the new kitchen sink was into the story, because we didn't know if we were going to be coming back for another season. But it does make things a little bit, kind of, traumatic for your ingestion when you're always on the bubble," he added.

"What I take away from Chuck, first of all, a five-year run on any show these days is a true blessing, and to have been able to go through it with people who are nice and creative and funny and hard-working and just lovable," said Baldwin. "I mean, we're gypsies, really, in this business—we're circus players—and we travel from town to town, it seems like, and we travel from family to family on different projects. So to land on one for five years has been a joy, and it's sad to see it go. But at least we have those five years together, and we appreciated it while it was happening. So I just feel blessed and honored to have been a part of it."

Are you ready for Chuck to sign off forever?