After 60 hours a week for 26 years, guy gets pic of Loch Ness monster

A lot of people have spent a lot of time lurking around Scotland's Loch Ness over the years in an effort to capture an image of the loch's famous monster. Now a lifelong believer has taken what he believes to be a definitive photo of the creature ... and it only took him 26 years.

George Edwards has spent 60 hours a week on the Loch for the last quarter century, giving rides to tourists on his boat, Nessie Hunter IV. He's also led quite a few hunts for the creature,and after all that searching, he finally got the photo he was after last November.

"I was just about to return to Temple Pier (in Drumnadrochit) and I went to the back of the boat which was facing the pier and that's when I saw it," Edwards said.

"It was slowly moving up the loch towards Urquhart Castle and it was a dark grey colour. It was quite a fair way from the boat, probably about half a mile away but it's difficult to tell in water."

Is this viral video evidence that Bigfoot really is out there?
So the FBI released some Bigfoot files. What are the chances the sasquatch is real?

The object disappeared below the surface after a few minutes, but not before Edwards took this photo: 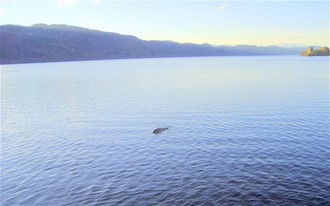 After he took the photo, Edwards decided it was worth getting a professional second opinion before releasing it publicly, so he sent it to some friends for analysis.

"I have friends in the USA who have friends in the military," he said. "They had my photo analyzed and they have no doubt that I photographed an animate object in the water. I was really excited as I am sure that some strange creatures are lurking in the depths of Loch Ness."

Even fellow Nessie hunters seem to agree that Edwards has something extraordinary. Steve Feltham, who's been hunting the creature for 21 years, called it "the best photograph I think I have ever seen."

"I think the images are fantastic - that's the animal I have been looking for all this time," Feltham said . "I would say it doesn't prove what Nessie is, but it does prove what Nessie isn't, a sturgeon which is a fish that has been put forward as one of the main explanations as to what Nessie could be but this hasn't got a serrated spine like the sturgeon."

Of course, some would say the photo doesn't prove anything, but for now at least, Edwards believes that he's captured something special, and that sea monsters continue to inhabit Loch Ness.

"All these people can't be telling lies," he said. "And the fact the reports stretch over so many years mean there can't just be one of them. I'm convinced there are several monsters."

What do you think? Convincing photo or mistaken identity?