It's going to be one Awesome episode tonight on NBC's Chuck as Ellie and Devon "Captain Awesome" Woodcomb finally get back into the spy action, said their actor counterparts, Sarah Lancaster and Ryan McPartlin.

Beyond that, we have lots to look forward this season, as the Awesomes face parenthood, Ellie's mom (played by Linda Hamilton) returns, and brother Chuck is still lying to her about the fact that he's a spy.

On tonight's episode, "Chuck Versus the Coup D'Etat," Ellie and Awesome run into Armand Assante's Generalissimo Alejandro Goya again. "Ellie and Awesome are expecting a child, and Ellie's just feeling like ... the baby might as well already be here," said Lancaster. "She feels like she needs a little excitement in her life. She's feeling a little too over-babied. And it just so happens that the Generalissimo's character calls upon Captain Awesome again to come down to his country of Costa Gravas, and there's a big ball in Awesome's honor, and because it's Chuck, nothing goes as is planned and hijinks ensue."

"Last year I was the one who was craving some excitement and wanted a thrill," said McPartlin. "That I was getting, not bored with marriage, just feeling like we're getting complacent with our suburban lifestyle, and that's when Armand Assante came in and I ended up thinking that I was going to save his life by tackling John Casey (who he believed was a bad guy). And this year, it's fun that they've kind of flipped that on its ear and made Sarah's character, Ellie, the one who wants a little excitement, and I'm the one who's like, 'Uh-oh. No. I know where this can go.' And of course, we go to Costa Gravas."

As for working with Assante again, McPartlin admits he's a fan. "He takes [his role] -- as funny as it is -- he takes it very seriously, and he's very committed to his role, and especially when he's dancing with Sarah Lancaster."

According to McPartlin, you never know what to expect from one week to the next on Chuck, "who's going to show up and what they're going to have us doing." And you never know when "there's going to be a 10-foot statue built" of one Captain Awesome. "It's a fun episode, and I really feel like Kristin Newman, our writer, did a great job of bringing [in] three different relationships and tying them all into the same type of problems." 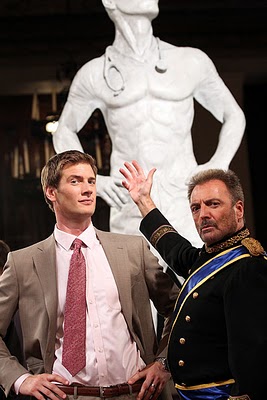 And his other favorite thing about having a statue? "The fact that the writers couldn't agree whether I had a shirt on or off, and the argument was, 'Well, he's a doctor. He'd have his shirt on.' 'Well, it's a statue. Of course you'd have it off.' So, they put the most skin-tight shirt on that you could still see the muscles through the shirt if you look closely. Really, it's ridiculous," he said.

As far as the rest of the season goes when it comes to all things Ellie and Awesome, "the biggest issue at hand is the mom situation," said Lancaster. By "the mom situation," she means Ellie's mom (aka Hamilton playing Mary Bartowski), not just Ellie as a mom. "I think that maybe is going to override Ellie's anger or Ellie's frustration, or even Ellie finding out [that Chuck's a spy again]. They're doing it in such a way that that's going to overpower anything that Ellie has in regards to Chuck's job. So, everything's been really focused on family."

When Ellie discovers that her absentee mother might be back, she begins to question how she grew up, "what she thought was right, what she thought was real, what was really going on. Also, obviously, at the same time while she's pregnant herself. So, it's bringing up a lot of stuff. Maybe making her a little bit softer than she otherwise would've been towards the idea of her mother possibly coming back. So, it's been a good ride for me so far this season," said Lancaster.

And when it comes to Ellie as a mom-to-be, she admits she's "getting used to the baby bump. ... The baby belly is in full effect. You will see it on Monday."

"It does take on sort of a life of its own, though," said Lancaster. "I find myself rubbing it all the time even though it's just foam. And I find myself, like, holding my back, and it changes my posture."

"It's not a Buddha belly. It's not like for good luck or anything," said Lancaster with a laugh.