French writer/director Alexandre Aja talks exclusively with SCI FI Wire about his recent horror film Mirrors, the reason behind the production delay on the upcoming Piranha 3-D and who he'd like to see play the lead in The Gospel According to Jimmy. Aja also gives us a little insight into the difficulties of filming with all those mirrors.

The DVD and Blu-ray release of Mirrors, now available, features commentary from Aja, an alternative ending and a documentary about the history of mirrors. Following is an edited version of our interview.

The stars of the killer gator flick Crawl got all shriveled during the 'punishing' shoot
WIRE Buzz: First Batman comic sells for record price; Pac-Man chomps into Hall of Fame; more

Aja: Yeah, OK, so the differences are, like, very, very small. I fought really hard to get the movie I really wanted to be released in theaters. The only concession I gave to the MPAA was a few blood effects and a few things that are back the way it was originally cut on the DVD. So it is a minor difference. Nothing compared to the difference you had in the DVD of The Hills Have Eyes to the way The Hills Have Eyes was released.

You have a great documentary about the history of mirrors on the DVD.

Aja: We could have done a whole series of DVDs on that topic [laughs]. The story of mirrors, that is what really got me into that project and what interested me the most. As soon as I started thinking about mirrors and the fact that in the movie we made, using mirrors as a killing device or something like that, I started doing research. And I found many, many historical myths and historical facts, ... and I really wanted for the audience to see a documentary showing a part of everything we researched. But it's only part. I encourage everyone who is interested to pursue the research. There are so many other amazing legends and myths. It's a great topic.

You had to have had some issues, filming with mirrors ... keeping crew out of the shots, etc. What was the most difficult part?

Aja: The worst part is ... I will never do another movie with mirrors [laughs]. I mean, it's like, once is enough for a lifetime. So many challenges. Every shot you find yourself with, like, 60 people you need to hide. And you have to think, ... even when we were writing the script we had to think about that and be careful. ... But then you get into the storytelling and you forget about that good decision that you had before you were writing. You just wrote everything that you have in your head, and you find yourself on the day of shooting, and it becomes, like, impossible for a full crew in a room covered with mirrors. And it's impossible to not catch any reflections. So you have to find ideas and solutions every time, and it's kind of like the biggest, I mean, it's one of the biggest challenges I've ever had. Even worse than shooting in the desert for The Hills Have Eyes. In the summer. 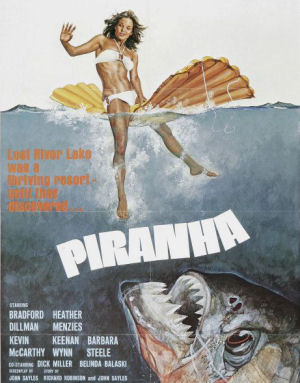 I know you've had some production delays on your upcoming film Piranha 3-D and that you wanted the water to be warmer for the actors. When do you start?

Aja: The reason why we had to push back production until next spring, for a very logical reason: We were stuck with a release date of next summer, and because of that we were almost going to shoot the movie during fall and winter when 99 percent of the movie is taking place on the water and under the water, which is just like the most stupid thing ever. So we all came back to our senses, and we decided to change the release date and move it to spring.

I'm sure your actors will thank you for that.

Aja: [Laughs.] It's even worse than that. Actors, OK, you know, we are all behind them and take care of them, but the hundreds of extras that we're going to have, when they come the first day and spend the day in the freezing water. The next day, even if we give them the maximum amount of money, they won't show up (laughs). So you won't have anyone in the water in the movie telling the story of spring break and the attack. So that implies a lot, a lot of extras.

It's been mentioned online that you may be attached to The Gospel According to Jimmy. Is that happening?

Aja: This is like a very personal project based on a French book that I'm trying to develop. And, you know, I'm developing it on the side and taking my time, trying to find the best writer, because I don't have the time to write it myself. So, yeah, it's really an important project for me, but I don't know how and when I'm going to do it.

For people who don't know the story, tell us a little bit about it. It sounds really interesting.

Aja: You have to imagine, a few years from now, the Republicans want to get back in the White House, and the only thing that they find is like an old cloning project ... to clone Jesus from a blood cell on the Shroud of Turin. And one subject had survived, and he's fixing pools in L.A., named Jimmy. And they're going to find him and ask him to come back and help them to get back to power.

Do you have a dream cast? Who are you thinking for Jimmy?

Aja: Yeah, I mean, the obvious choice as a dream cast would be someone like Seth Rogen to play Jimmy.