All you need to know for Dollhouse season 2

The cast of Dollhouse—Eliza Dushku, Tahmoh Penikett, Dichen Lachman and Enver Gjokaj—shared more details and hints about what's coming up in the show's second season in exclusive interviews over the weekend.

Dollhouse returns Friday on Fox with the episode "Vows," in which Echo (Dushku) goes on an assignment in which she marries notorious arms dealer Martin Klar (guest star Jamie Bamber of Battlestar Galactica), while Paul Ballard (Penikett), Sierra (Lachman) and Victor (Gjokaj) find themselves in new circumstances.

Here's some exclusive scoop about what to expect (big spoilers ahead!):

1. This is what creator Joss Whedon wanted all along. After a season full of network retooling, the show has ended up back at the dark, noir-ish tone from the pilot that Fox made Whedon reshoot. "It reminds me very much, to be honest with you, of the unaired original pilot," Penikett said. "It's dark. The show seems to have found its theme and its music. It's ironic, but I think we've come full circle, and it works and it makes sense, and it is the show. You understand that, and the feeling on the set with the actors and the writers and everyone is like, 'OK, we've got it now. We've got it. This is it.' Even me personally as an actor, I've just been feeling much happier with the work and much more confident, because it just makes sense. Last year was bumpy at times, very bumpy. It's difficult to work like that."

2. It's just like old times with Faith and Wesley. Guest star Alexis Denisof will encounter his old Buffy/Angel co-star Dushku in his new role as a crusading senator. Sound familiar? "What, when I had Pam cooking spray and the lighter and I was torturing [Wesley] tied to a chair?" recalled Dushku about a Buffy an Angel episode. "[This is] not that different, as a matter of fact. I'm still kind of torturing the poor man. The episode we're about to start now is sort of a continuation of the last episode with Alexis Denisof. It's just amazing. We spent the whole last episode together." 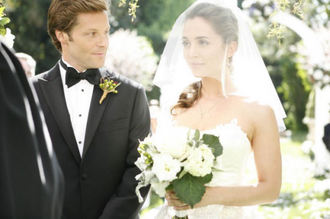 3. Get excited about Sierra/Victor love. Whedon said the two Actives would go at it like monkeys this season, but the actors who play them said it'll be more subtle. "There's just hints," Lachman said. "I think with Victor and Sierra, it's a difficult thing to go into, because they're both people with no persona, but I think you're going to be excited when you see. You'll be very happy."

For his part, Gjokaj said, "Oh, who cares about Victor? Come on. Just have him looking at Sierra in the shower. Listen, I love it, but only Joss knows where the mythology's going to go. Victor's such a simple little soul, isn't he? It's not even [that he's] in love. He's just fixated on Sierra. I think our lovely fans have responded to that, and I think people have told Joss that they like that storyline, so I think we're going to see it. I think when it comes to stuff that I get to do, a lot of it has to do with Sierra and that little developing love story."

4. Ballard's now deep in the Dollhouse. Adelle DeWitt (Olivia Williams) and Ballard have struck an uneasy truce to work together. Both are looking over their shoulders, but while they're together, Ballard's services can be useful. "Paul and his skills as an FBI field agent are really going to come into play, and the Dollhouse is going to realize how valuable of an asset he really is," Penikett said. "His interrogation skills, his profiling skills, are going to come into play. There's going to be an opportunity, a really cool episode coming up, [writer] Tim Minear's episode, actually, where I have to interrogate a possible killer. I try to get into the mind of him. It's a really, really interesting and dark episode, so that's one situation we've got coming up." 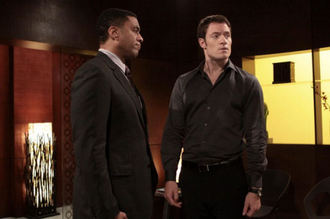 5. Echo's got a secret. Actually, hundreds. Topher's mindwipes aren't actually erasing all of Echo's past imprints. Now Echo can try to access all her previous abilities to become a whole person again. "I think each imprint that goes wrong, she's absorbing something new, and it's all going to take her in the direction of how she's ultimately going to shake things out," Dushku said. "So she's sort of doing her own heroic acts of helping people or saving people. Without giving too much away, I think it—in a way it strengthens her case, and then I think at other times she finds that out in these missions, she's glitching in ways that she comes to control the outcome."

6. Ballard's got other issues this season. As he reluctantly works with the Dollhouse as Echo's new handler, Ballard will also be able to resolve some unfinished business we didn't even know about before. "I think when we meet him at the top of this season, Paul's not OK with it," Penikett said. "He's not sitting pretty. But he also sees an opportunity to take advantage of this technology and do some good, correct some wrongs that he made in the past, some unclosed cases. For instance, Martin Klar—which you [see] in 'Vows' with Jamie Bamber. I guess the interesting question will be how long will his conscience allow this? Does he have a hidden agenda? Is he still trying to take down the Dollhouse? What's going to happen? I think it's obvious that he and Adelle have an understanding. She knows that he doesn't like it, he doesn't agree with it, but he is working for her. She also knows that if Paul has the opportunity, if he ever feels his life's in danger, he'll do whatever he can to expose her."

7. The boss will become the employee. Whedon hinted at the appearance of other Dollhouses that come to interact with Adelle's. Penikett offered some more details about the uncomfortable position in which this puts her. "You'll see in this season the powers that be above Adelle really flex their muscle and their strength," Penikett said. "You'll see this powerful figure who we know as Adelle DeWitt really be tested. You'll understand how fearful she is of her employers and the people above her, which is a really interesting storyline. My character does get to meet one of them in particular. And I think one of the coolest things you're going to love this season, we get into backstory a little bit about why people are working at the Dollhouse, why they're there, which is one of the most compelling things that we don't really explore in the first season other than with Echo."

8. You'll see a totally different Sierra. In her brief appearance in the season premiere, Sierra plays a prim racist. It may sound like actor Lachman is doing a normal British accent, until you appreciate the nuance. "Well, it's received pronunciation, so she's really upper class, and she's racist," Lachman said. "That was very difficult for me, actually, to do the accent. I've never done that before, and it was fun, because I've never actually played someone like that. Received pronunciation is very difficult."