An open letter to ex-governor (and future actor) Schwarzenegger

The former biggest movie star on the planet left acting behind to chase a career in politics. But as he steps down from running the state of California—some would say into the ground—what are the options for the former Terminator?

It must be a little strange for you, returning to a life out of the political spotlight, with further prospects of electoral office pretty much closed off to you. (Unless you're a glutton for punishment.) What are you gonna do with yourself?

You've recently made some statements about the ease of stepping back in front of the camera: "It is like bicycling, or like skiing. ... You get on it and you feel like there is no time lapse there at all." That may be how it might seem to you, but to the audience it's a different story.

You've been gone for a long time, Arnold—and even before you took office in 2003, no one could say that you were a vital Hollywood star. Terminator 3: Rise of the Machines would've been a decent enough swan song, but Around the World in 80 Days pretty much wiped the slate clean and evoked the ham-fisted mediocrity of Batman & Robin.

So if you are going to make another bid at motion picture stardom, it seems like there are three options open to you:

1) Get in shape and try to be an action hero again.

Which is probably the least appealing of the options. Stallone has pretty much cornered the market on over-the-hill-but-still-capable-of-kicking-ass throwback stars. And Dolph Lundgren, Jean-Claude Van Damme and Wesley Snipes are nipping at his heels. You don't want to seem like the sad former bodybuilders charging $20 for autographs at Comic-Con. We don't want that for you, either.

You were actually a pretty decent comedian for a while, Last Action Hero and Jingle All the Way notwithstanding. Twins and Kindergarten Cop are vastly entertaining flicks, and you showed some real comic timing. The risk here is appearing as a parody of yourself. It's possible to embrace that—Exhibit A: William Shatner—but it's a tricky line to walk.

Heh. Just kidding. Even when you were in your prime, Arnold, no one would've described you as a master thespian. You were always "better than he has any right to be." It might be a little late to switch gears so drastically, to call on muscles that haven't merely atrophied, but that you've never actually used before.

Instead, we're going to offer you a fourth alternative, which takes a bit of option 1 and sprinkles in a pinch of option 3, and sticks it in the retro blender: 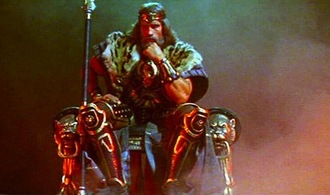 You're now old enough to play a barbarian in the winter of his years, softened a bit by years on the throne of Aquilonia. You can sell the weariness of a hero, tempered, who must revisit a life he left behind so many years ago. And you can whip that body into shape one last time to heft that sword you've been keeping in your office all these years. Conan is a being of will. And so is Arnold. At least the one we fondly remember is.

Or, you could just wallow in the riches gleaned from decades of wise real estate investments and movie residuals. But if you're gonna take one last shot at the brass ring, you could do worse than play the character that made you in the first place.

Debate Club: Which is better: The Terminator or Terminator 2: Judgment Day?
When Mel Johnson Jr. first read Total Recall's description of Benny, he threw the script across the room
Tag: Arnold Schwarzenegger
Tag: Conan the Barbarian
Tag: the terminator