And now: Tom Cruise, in a mech suit, running from a wall of fire

Tom Cruise is hard at work on his next big-budget sci-fi flick, All You Need Is Kill, and the first set pic of the Mission Impossible star back in action has finally leaked out. Boy, is it a doozy.

The film will follow a soldier (Cruise) fighting an alien war who is stuck in a time loop, with time restarting every time he dies. So Cruise is expected to die. A lot.

But who cares about the plot when the first set photo to leak out shows Cruise in a giant mech suit running from a wall of fire. Yes, it's as awesome as it sounds: 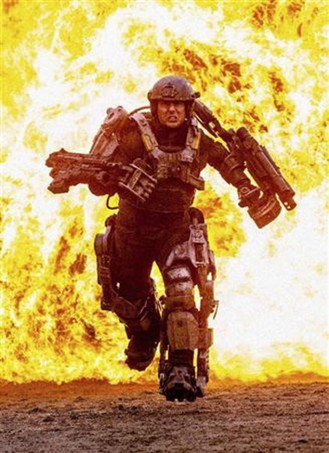 The film is based on Hiroshi Sakurazaka's 2004 Japanese sci-fi novel, which received quite a bit of acclaim in the homeland. In addition to Cruise, the film also stars Emily Blunt, Bill Paxton and Charlotte Riley.

Though a mech suit running from a wall of fire might seem nuts, director Doug Liman (The Bourne Identity, Jumper) knows how to make fantastic action look realistic, so we're dying to see how this one comes together.

What do you think? Are you looking forward to this one?