David Carradine—the veteran 72-year-old character actor who was found dead today in Bangkok, Thailand—leaves behind a considerable legacy for genre fans, who have watched his work for decades as he created one memorable characterization after another in such TV shows as Kung Fu and such films as Death Race 2000 and Kill Bill.

Carradine apparently killed himself in the Thai city where he was shooting Stretch, a thriller film. [Update: Thai police now say Carradine may have died accidentally while attempting a sex act known as auto-erotic asphyxiation, the Associated Press reports.]

Not Your Shero: O-Ren Ishii, Kill Bill's true anti-heroine
Kill Bill: Volume 1 turns 15: How do we view The Bride and Tarantino in the post-Weinstein era?

Carradine was well known for his roles in cult productions, perhaps none so famous as the half-caste martial-arts master and former Shaolin monk named Caine, who first appeared in the 1972 TV movie Kung Fu and later in the TV series based on the film. It was a character who was credited in part with kicking off the Western world's obsession with martial arts.

Between 1972 and 1975, Carradine appeared in 46 episodes of the Kung Fu television series, establishing himself as a major television star even as he continued to appear in a number of small but memorable roles in films, including Mean Streets and The Long Goodbye. The show garnered him Emmy and Golden Globe nominations.

After Kung Fu ended its run in 1975, Carradine played Frankenstein in director Paul Bartel's satiric sci-fi action movie Death Race 2000; his character is the most famous of the film's homicidal drivers. The role not only gave Carradine the second iconic character of his young career, it also made him a movie star.

In the late 1970s and thanks to the success of Death Race 2000, Carradine became associated with movies about cars, reuniting a year later with Bartel for Cannonball!, about an ex-con who signs up for the Trans-American Grand Prix. In 1978, Carradine starred in Deathsport, another sci-fi action movie, about a post-apocalyptic society in which criminals fight to the death on motorcycles. Meanwhile, Carradine returned to martial-arts action with Circle of Iron, an epic conceived by Bruce Lee, in which Carradine plays four separate roles.

In 1980, Carradine co-starred with brothers Keith and Robert in Walter Hill's western The Long Riders, which was nominated for the Golden Palm at the Cannes Film Festival. While the actor made an easy transition into fantasy epics with films such as Q: The Winged Serpent and The Warrior and the Sorceress, high-profile starring roles eluded Carradine during much of the 1980s and '90s, although he did return to the role of Caine in 1992 for Kung Fu: The Legend Continues. 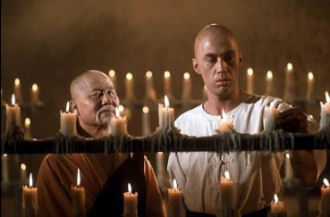 An updated Kung Fu TV series last 83 episodes, but most of Carradine's '90s film work was either in sequels (Waxwork II, Children of the Corn V) or low-budget straight-to-video releases (Future Zone, Karate Cop, Kill Zone). But in 2003, Quentin Tarantino recruited him to play the title character in Kill Bill, the sprawling, bloody two-part opus, not only rekindling Carradine's career but also introducing him to an all-new generation of genre fans.

Kill Bill was a triumph in no small part due to Carradine's performance, which drove Uma Thurman's character through some four hours of mayhem, culminating in a showdown that remains among the actor's finest work. What's most remarkable is how Carradine seems to have channeled his decades of work—some great and some less so—into the simultaneous self-importance and self-destructiveness of Bill; even as he arrogantly reveals the existence of Thurman's character's daughter to her for the first time, he seems to acknowledge that he is due a massive cathartic comeuppance, and it's that resignation that gives his character poignancy in the final moments of the film. 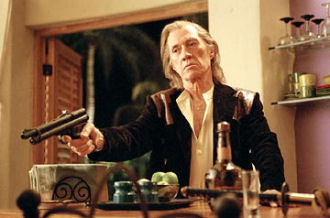 Within the same year, Carradine also appeared twice on J.J. Abrams' Alias. But leading-man roles would become a permanent thing of the past. That said, character roles were always the actor's true strength, and he invested himself in a variety of different characters following his resurgence in Kill Bill, including comedic roles in films such as Epic Movie and more serious ones in films such as Richard III.

But it seemed Carradine's heart always remained with genre fare, which may be why even small appearances in movies such as Hell Ride and Crank 2—not to mention a voice-over in the recent Death Race re-imagining—delighted his fans and surprised audiences even when they weren't quite sure who he was.

Born in 1936, Carradine began his career in episodic television, appearing on series such as Wagon Train and The Alfred Hitchcock Hour before landing roles as tough guys and villains in westerns on the silver screen.

Like many of his 1970s contemporaries, Carradine began his career as a purveyor of schlock, and then found a way to make that material meaningful—even if only sometimes to himself. It earned him awards and nominations, box-office glory and, eventually, the admiration and respect of multiple generations of moviegoers and TV fans. As someone once said about the craft of acting, it's not the size of the role, but the size of the performer that makes the most difference, which is why no matter how weird or wild or small Carradine's characters, they—and he—will stay with us for generations to come.