Archaeologists uncover an actual door to the afterlife in Egypt

So that's where it is!

Seriously, Huffington Post reports that archaeologists have unearthed a 3,500-year-old door to the afterlife from the tomb of a high-ranking Egyptian official near Karnak temple in Luxor:

These recessed niches found in nearly all ancient Egyptian tombs were meant to take the spirits of the dead to and from the afterworld. The nearly six-foot- tall (1.75 meters) slab of pink granite was covered with religious texts.

The door came from the tomb of User, the chief minister of Queen Hatshepsut, a powerful, long ruling 15th century B.C. queen from the New Kingdom with a famous mortuary temple near Luxor in southern Egypt.

No word on whether the door actually opens or where it leads (heaven? hell? Asgard? Sto'Vo'Kor?) And is it just us, or does this look like the TARDIS? 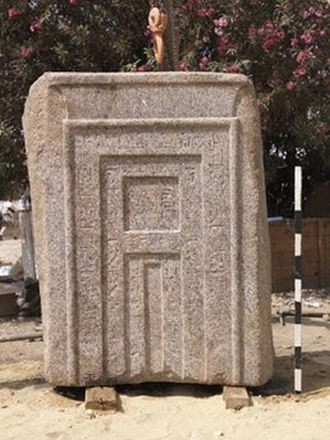