As Doctor Who's David Tennant exits, the Master is reborn

You can't keep Doctor Who's villainous Master down, apparently. As we head into the final two Doctor Who specials featuring David Tennant as the Doctor—"The End of Time, Parts One and Two"—the Doctor will run up against his old enemy, even though the Master (John Simm) died when we saw him last and the Doctor burned his body on a pyre. (Spoilers ahead!)

And at the end, Tennant regenerates into the 11th Doctor, Matt Smith. Just how remains to be seen, but it's hard to imagine the Master isn't responsible for his demise in some way.

David Tennant has a theory of how the 10th Doctor and Rose ended up, and it ain't pretty
Some of the coolest Good Omens Easter eggs, according to Neil Gaiman, David Tennant and crew

"I'm not one of those actors who would have liked to have played Doctor Who," Simm said in an exclusive interview with SCI FI Wire. "I'm much more attracted to the dark side of characters, so this is perfect for me. The Master is perfect, perfect for me."

The age-old battle between the last two Time Lords has been going on through much of the Doctor Who series (since season eight in 1971, during the first round of Doctor Who). These children of Gallifrey have battled through space and time, the Master seeking to control the universe, the Doctors trying to stop him.

"They were very good friends," Simm said. "So I see it as though they're kind of really, really emotionally attached. They're the only two of their kind left in the whole universe. They've got each other. and that is it. And if anyone can cure the Master and cure this noise in his head, it's the Doctor. They're the same person, more or less. There's a real connection there. It's just a shame that they're ... um ... mortal enemies. That's why they're mortal enemies, because they ... you know, it's like Cain and Abel." 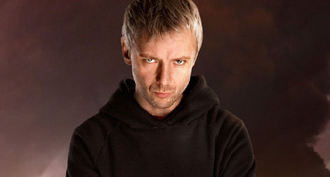 In "The End of Time, Part One," which makes its American debut on Saturday at 9 p.m. on BBC America, Tennant begins his final journey as the 10th Doctor. The alien Ood warn the Doctor of a great danger that's approaching. When the Master is reborn on Christmas Eve, it leads to both characters determined to cheat death in a battle that rages from the wastelands of London to the mysterious Immortality Gate. Meanwhile, a terrible shadow begins to fall across the entire universe. "The End of Time, Parts One and Two" were written by Russell T. Davies and directed by Euros Lyn. Guest stars include Bernard Cribbins, Catherine Tate, Timothy Dalton, David Harewood and June Whitfield. "Part Two" premieres a week later, on Jan. 2 at 9 p.m.

Simm, who's starred as Sam Tyler on the British version of Life on Mars, went blond for his new incarnation as the Master. He admits that he's thrilled to be playing the Master and working with Davies and Tennant.

"It was great fun," he said. "It was great to work with Russell. We nearly did a few times. I've worked with many, many great writers in this country; Jimmy McGovern, Paul Abbott and Russell T. Davies was missing from my CV, and so it was wonderful. Wonderful to get a chance to work with him, and I think we'd both been trying to make it happen for a while. And, yeah, great to work with David. David's a great actor, and he's a great Doctor. A lot of respect for what he's done with that character; he's a wonderful Doctor, and it was a real honor to be asked. Not only to be asked to be the Master, but to reprise it and come back and be in his final episodes. So, yeah, we had a lot of fun. Lot of fun doing it."