Astronomer: What a Space: 1999 lunar explosion would really be like

On Sept. 13, 1999, a tragedy befell all mankind. An accident of unknown origin at the nuclear waste dumps on the far side of the moon caused a massive explosion that hurled the moon out of Earth orbit.

Thanks humans, one of the weirdest creatures on Earth is now extinct
This black hole glitched like a cosmic computer…then restarted itself out of nowhere

Traveling away at high speed, there was no chance for rescue of the more than 300 crew on Moonbase Alpha. All hands were presumed lost.

At least, that was the premise of the sci-fi classic Space: 1999, a British TV show from the 1970s. Let's be clear right away: I loved that show. A lot. I was a kid when it hit the air, but the recent release of the first season on Blu-ray caused me to go back and rewatch it, and I have to say a several of the episodes were a lot of fun. And back in the day, that show helped inspire me to become a scientist.

Even cooler, the show has been greenlit for a reboot: Space: 2099 will be the updated version hitting your TV in the future.

So maybe it's time to think again about the show. The basic premise is that the waste dump explosions blasted the moon like a rocket into space. Is that possible? And what would happen if they could?

If you know me, then you probably already know the answers are 1) no, and b) nothing good, I assure you. So let's set our lasers for stun, get Eagle 1 to the pad, and do the math.

The moon, you might guess, is pretty big. Well, smaller than Earth, but still the 14th biggest object in the solar system. It's not easy to push it around, and the energy it would take to eject it from Earth orbit would be substantial.

And we can figure out how much! The clues are in the opening episode itself, "Breakaway." First, we need the speed at which the moon was traveling. In the climax of that episode, the nuclear dumps go off, pushing on the moon with such force that the Moonbase inhabitants are thrown to the floor, the acceleration pinning them there with huge G-forces for several minutes. 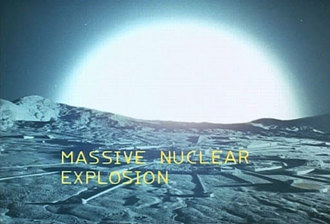 I was once in a fighter jet pulling a 4-G turn—don't ask—and I could still move. Given that the Alphans were really slammed down, let's double that and say the explosion caused an acceleration of 8 G—8 times that of Earth's gravity, or 80 meters/second/second. Timing it from the Blu-ray, they endured that force for 2.5 minutes. Since velocity = acceleration x time, we get

But, as it turns out, not fast enough. The escape velocity from the sun at the distance of the Earth is about 40 km/sec. So the moon would leave Earth orbit, but it still wouldn't have been moving quickly enough to leave the solar system. It would go into a highly elliptical orbit around the sun. That's a bit awkward for the premise of the show. One saving possibility: the Moonbase had gravity generators. So maybe the acceleration was much higher, and the generators could only compensate so much. That could've provided sufficient acceleration to the moon to leave the solar system.

Bright side of the moon

So now we have the velocity of the runaway moon, and we can figure out the energy of the blast. The energy of motion is called kinetic energy, and it depends on the mass of the object and how fast it's moving. Specifically:

Joules are a handy unit of energy that physicists use. To put it in terms that might be easier to grasp, a one-megaton nuclear bomb explodes with an energy of about 4 x 1015 Joules. So those nuclear waste dumps exploded with the energy yield of 1 quadrillion one-megaton bombs! In other words, take a million one-megaton bombs and blow them up. Now do that a billion more times.

Yeah. That's a lot. I suspect even in the far-distant future of the year 1999 that's more energy than waste dumps could handle.

In fact, we can put this another way. Every second, the sun emits about 4 x 1026 Joules of energy, so that means to hurl the moon as depicted on the show, it would take about 13,000 times the energy emitted by the sun! Given that the acceleration lasted for 2.5 minutes, that means those dumps were somehow pumping nearly 90 times the sun's entire energy output into the moon every second.

I'd have to think that might have other repercussions. In fact, if you read my previous Blastr article about blowing up the Earth you might start to get a glimmer of how bad this would be. It's actually enough energy to vaporize the moon dozens of times over!

The Moonbase Alpha crew wouldn't have been pinned to the floor. They would've been a cloud of very rapidly expanding vapor.

Of course, Space: 1999 is science fiction. And in the opening episode they make a big deal of this explosion being of a new kind of previously unknown magnetic energy, and later episodes make it clear Higher Forces were at work. But man. They must've been working hard.

I hope in the new show they figure out a better way to turn our satellite into a vagabond moon. There are lots of other concepts: wormholes, folded spacetime, quantum teleportation (writ very, very large), hyperspace ... none of which would destroy the moon (and the Earth in the process). Otherwise, we're in for a very short TV series.

Phil Plait is an astronomer and blogger for Discover Magazine. He loves Space:1999 so much he chose Commander Koenig as a model for his Geek-A-Week card.