One of the recipients of Avatar's three Oscar wins told a quick story on stage that had even had his fellow nominees scratching their heads.

When Rick Carter, Kim Sinclair and Robert Stromberg accepted their awards for best art direction at Sunday's Oscar ceremony in Hollywood, Stromberg confessed, "You know, 13 years ago, the doctors told me I wasn't going to survive, and I thought that this dream of standing here would never come true. And here we are. I owe this to my amazing wife, Lizz, my two kids Reese and Remy, for supporting me."

Later, Stromberg told reporters backstage that he had never even revealed his illness to his co-workers. "It's a difficult thing for me," he said. "Actually, I haven't even talked about it to these guys, but it's a personal experience, and, yeah, it was a bout with something that was ready to kill me, and it was really bad. And out of that, I told myself that I would spend whatever time I had here doing something, or trying to do something, profound, worthwhile, something else. So from that point to tonight is a journey that I can't explain to anybody. I'm the luckiest guy on the planet. This award, to me, is actually me understanding that I'm alive, and it's very special."

Stromberg was previously nominated for visual effects for Master and Commander: The Far Side of the World. "It's actually an interesting time, where visual effects is essentially a form of design, and it's evolving, because we're creating new tools to allow the next generation of filmmakers to do anything they want," he said. "I think it's important for any production designer to understand the visual-effects side of things, the new technology, the traditional elements to things. ... It's just another tool in the toolbox, but it's a tool that can open up the world to new creative ideas."

The winners credit director James Cameron for creating the world that they brought to life. "We were really were conscious that we were building a world," Sinclair said, "and I've never been on a film before where at some stage in the process we were arguing about the size rivets, whether 2 millimeters or 2 and a half millimeters in diameter, while somewhere else in the world somebody probably was discussing how many hundreds of thousands of kilometers in diameter a planet was. So everything from the hugest thing to the smallest thing all really came out of Jim's head, and that just was an amazing mission that we thought we were getting on the screen."

Carter added, "Everything that Jim is doing in the last 10 years since Titanic has fundamentally been expeditions, and that's what we did. ... That's where Jim has been, in the bottom of the ocean, it is where he is in his vision, it's where he pushed all of us, and this is the result for us. ... We'd follow him to the Alamo." 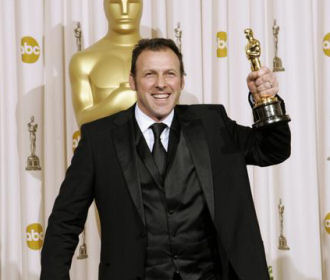 Cinematographer Mauro Fiore, who won for his camerawork, explained that he shot the live-action part, and that was used for the computer-generated lighting.

"I think it's a pretty amazing thing for me to be honored in this capacity, especially because this is an HD film and this is the first time that a film has won that has so much computer-generated images and also live action together," Fiore said. "So this is a huge revolution for the industry."

Backstage, Letteri followed up with what he tried to say hurriedly on stage. "What we did with Avatar, if you really look at it, we took things that are out there in the world every day, we just made them bigger, shinier, put them together in new ways. But all our inspiration comes from the real world. So if you really look, you can see all those things around you, and I would just encourage people to get out and look for it."

Letteri added, "What we did as animators and artists was to translate that into the characters you see on screen. Because, for example, Zoe [Saldana] is not Neytiri, so someone has to make those choices about what does Zoe's performance mean for Neytiri, because everything is a little bit different about it."

He said he thought some of the Avatar actors were overlooked. "There's a lot of foundation, and we hope the Academy will start to recognize that as well," Letteri said. "It's something important to note; Zoe's performance is Neytiri. She delivered Neytiri. We were emulating what she gave us."

He explained, "Think of it as a replacement for prosthetics."

They all said they would be doing a lot of celebrating after the Oscars ceremony, no matter how many trophies the film took home.

"There's a big Irish contingent there," Baneham said. "There's 50 strong, I believe, plus the TV group. So we will get together and have a few beers. All the guys, although other lads didn't win tonight, they were huge, huge winners just by the nomination."