You've heard some of the buzz surrounding filmmaker James Cameron's upcoming 3-D sci-fi epic movie Avatar? Well, Cameron has a message for the haters: You ain't seen nothing yet.

Coming up for air after "four and a half years of intense work," Cameron insists in an exclusive interview that he "consciously made a decision not to read any article or news breaks about Oscar buzz" while he labored to finish the film and also admits that he's been "well aware" of some of the negative fan buzz surrounding the project, based on screenings of early footage and trailers.

Why don't we think about Avatar and Sam Worthington anymore?
Glowing plants engineered with lit genes will make you feel like you live in Avatar

"I know there's been a lot of talk and speculation about it, but it's kind of like the generic Oscar buzz out there—it's pretty ridiculous when people haven't even see the movie," he says, addressing the issue. "All anyone has seen is the 25 minutes of various scenes we showed at Comic-Con—and that's not the movie! How can fans judge it by that?"

The director is quick to defend Avatar, which is set on the planet Pandora and features the Na'vi—tall, blue-skinned aliens—as well as human-engineered "avatars" and plenty of high-tech futuristic toys.

"I set out to make a film that's like the stuff that played on the projection screen of my mind when I was a teenager, informed by science fiction," Cameron says. "And I wanted to do original stuff, all those creatures and landscapes and plants and animals that I'd been drawing and noodling out over some 20 years. And fans really love this kind of depth and detail, so when I began Avatar I really put a lot of energy and focus into a sense of completeness in detail of the world, for that very reason." 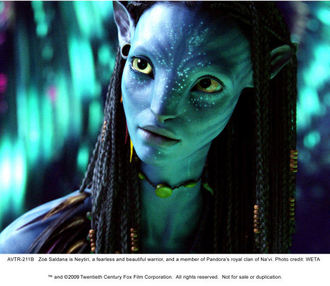 If fans are "disappointed" with the film's blue alien race, Cameron stresses that "I wasn't going for the alien. I wasn't going for the ugly and strange. I was going for something that's an expression of beautiful human movement in the film. They symbolize the best of us in the way the film works subconsciously, which I feel is aspirational. What they really are is a heightened sense of ourselves and what we could and should be."

Not all the buzz has been negative: The only public screening of the film so far, to the Hollywood Foreign Press Association in Los Angeles this week, generated enough enthusiasm that the movie's now being buzzed as a Golden Globe nominee, HitFix reports.

And if you really like it, Cameron promises more from the universe of Avatar. It "is not true science fiction in the sense of saying, 'This is what contact with an alien species would be like.' It's not about that at all. It's about how we've lost contact with ourselves in a natural state. So if we fail, it all ends there, but if we are successful then we'll make more films, and that world will continue to flesh itself out and be a place that fans can go to."

Cameron insists that the mix of sky-high expectations and negative fan buzz isn't freaking him out. "No, it's good, as we had to sell a movie that wasn't a sequel or remake or part of a franchise or based on a best-seller," he says. "It had no brand awareness, and I was more worried about people not even knowing about the film than them kind of arguing about it or having high expectations or having those dashed."

As you might expect, the director who once called himself "the king of the world" says he's "very confident" that once "even hard-core sci-fi fans see the whole movie, they'll get it, because the film will speak for itself. If I can just get 'em in the damn theater, the film will act on them in the way it's supposed to, in terms of taking them on an amazing journey and giving them this rich emotional experience. And it's not really like any other film, and I think that's its greatest asset—and its greatest deficit. You can't compare it to something else."