As Fox's sci-fi series Fringe builds to the second-season finale, it looks like the pieces are falling together for a major resolution of the William Bell/Walter Bishop storyline, and guest star Leonard Nimoy offered us a preview of the fireworks in an interview.

We sat down with the 79-year-old acting legend with a couple of other reporters during a visit to the set of Fringe last month in Vancouver, Canada. Following is an edited version of our complete interview with Nimoy, with lots of spoilers! (The two-part season finale, "Over There," airs May 13 and 20.)

It seems like the last two seasons have pointed toward either a meeting with or confrontation with William Bell.

And I'm not sure whether or not this season resolves the whole story involving William Bell or what he means to the main characters.

Nimoy: There will be a major confrontation. I'll call it a confrontation between the two characters. We saw just a little snippet of it the last time I was here, where I was doing brain surgery on him. But now we will see, we will see them spend some time together in a dramatic setting, a dramatic situation where we will get some more information about their [relationship], an overview of their relationship. The past, what they were doing, what they were trying to do, how it has affected the universes, both universes. And, truthfully, they have feelings about each other now. They have stuff to work out with each other. In fact, there's a moment I'll tell you about where they start to get into it, and Olivia says, "Hey, work it out some other time." (Laughs.) We have some other stuff to deal with, which is I think a terrific moment. We will see that. We'll see it happen. 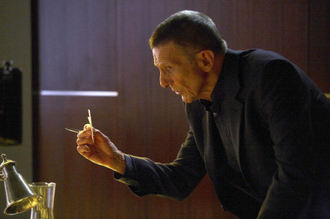 Will we see key scenes between William Bell and some of the other characters besides Walter?

The show's been picked up for a third season.

Nimoy: How about that? That's great.

Does that mean that your character might return in the third season?

You alluded to some personal fighting between William and Walter. Would that have anything to do with relationships with possibly the same woman?

Nimoy: Possibly with women? Oh, what an interesting question. Wow, where did you get that? Is there some hint of that someplace?

Personally I have a theory. Nina might be a connecting link ...

Is there anything about William Bell that you can identify with, or what aspects of him are you most fond of?

Nimoy: I don't think I'm an awful lot like William Bell. William is kind of what we refer to in our culture as a master of the universe. A guy who has accomplished extraordinary things. He's kind of the Paul Allen of those guys. Scientific genius as well as an extraordinarily successful businessman. A rare combination. I don't fit that mold. ... I'm a character actor, and I'm trying to find my way through this process. As an actor learning how to play this guy, we've developed little bits and pieces of him so far, and there will be more developed now. I can't say that I actually relate to him. But I do understand, when I play the dialogue, I understand where he's coming from. That's a matter of, just kind of an intellectual understanding of what he's dealing with. 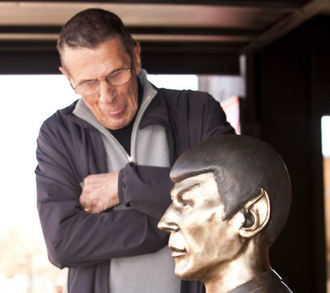 In the April 1st episode, which we've seen, "Peter," we see a younger Walter and we also see an alternate-universe Walter. Is there any suggestion of either a younger William Bell or an alternate one?

And what about the alternate William Bell, or maybe there isn't an alternate?

Nimoy: Well, that's what I'm talking about. The alternate William Bell. On the side that William Bell is on now, there was an alternate William Bell. And we'll find out what his story is all about in this episode. Am I clear about that? (Laughs.) Or am I definitely trying to confuse you? What am I trying to do here? I'm not trying to confuse. I'm doing the best I can. Fringe is a very complicated show, which is one of the things that makes it so successful. It's intriguing, constantly intriguing. There's no question you can answer in any definitive way that doesn't lead to another question. (Laughs.) So that's where we are. We're having a good time. ...

How many days are you working on this final episode?

How do you feel your understanding of the character has evolved since that first meeting with Olivia to this now? What's your grasp of William Bell now?

Nimoy: Good question. Again, my grasp of where William Bell is now is given to me by the dialogue on the pages in these two scripts. It's the things that I say to people about myself as William Bell. It's the things I tell them about myself. And always there seems to be this question about whether or not you believe what I'm telling people about myself. He says specifically to Olivia, "I know you have reason not to trust me." I've said that to her before. "But you're going to have to. So take your choice. Either way, away from me and go your own way, or listen to me and try to take something from what I'm saying that's useful to you." And I think that's the fun of the character. We have to decide whether you want to trust him or not and see what evolves. These scripts give us a couple of twists and turns where we wonder if we've been had by William Bell, which is great.

Are we going to learn what motivates William Bell?

Nimoy: Yeah, I think you'll get more about what he's after.

In the "Peter" episode, we've seen Walter finding a cure for Peter. And William is just this interesting scientist, and he's always off somewhere. I'm curious what drives him. 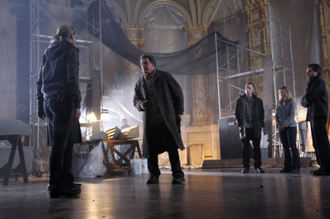 John Noble, who plays Walter Bishop, is an actor who ...

Nimoy: John Noble is a fearsome actor. What else you want to say? (Laughs.) Fearsome. He's also a very tall guy. OK, what?

What's your interaction with him? Has it been fun playing these meaty scenes with him?

Nimoy: I've only played one very brief scene with him where he's totally under control. He was on a gurney, and I'm about to operate on his brain. We don't have to stand toe to toe on that one.

Walter and William have this rich backstory. How do you go about developing that kind of history with the actor?

Nimoy: Well, it's different on the page. It's on the page. We don't make it up. It's pretty clearly defined. Walter says his piece, and I say mine. And I say, "Hey, just a minute," and I say, "What about you?" We have that kind of cross-examination of each other, and I think you'll find it interesting. I hope you will.

The first-season finale had the twin towers. What was your response when you got that script and the reveal?

Nimoy: I thought that was very interesting and really kind of daring contemporary television to pull in that story. To pull that event into this TV story, I thought, was very innovative and daring, frankly. "Wow, that's OK. This is serious." ... You know, it's not easy to use that kind of stuff without seeming somehow exploitive. But I thought they did it very, very well.