Fans of NBC's Chuck can rejoice! The network announced today that the spy series has received a full season pickup, and show co-creator and executive producer Chris Fedak said that viewers should get ready for more Mom mythology, Summer Glau and an Awesome baby this season.

Fedak admits that the producers had a plan in place in the hopes that more episodes would be ordered. "We've always designed our show to push story, to tell bigger stories, and we've done that for the first 13 episodes. But we have the next part of the story teed up so that we can ramp into nine more episodes ... or whatever NBC might order. We have that idea out there, and we have the big shape of things that we want to do. ... We'll start going to break that out, episode by episode, and figuring out where we're going each week," said Fedak in an exclusive interview.

As to how many episodes there will be, that has not been announced. It was reported that NBC may actually be ordering 11 episodes, rather than the standard nine, which would give the show's fourth season a total of 24 episodes, according to EW.com.

Fedak said viewers should get ready for some exciting "big mythology" stories, starting next week with "Chuck Versus The Aisle of Terror," which brings back Linda Hamilton as Mamma Bartowski for their Halloween episode. Nightmare on Elm Street's Robert Englund will also guest-star as a scientist who seeks to release a nightmare-inducing toxin. 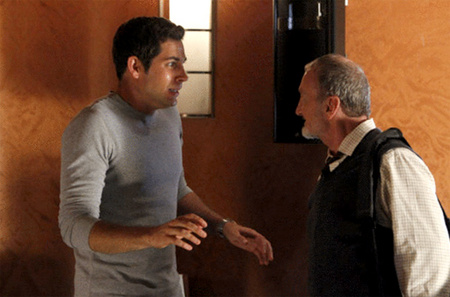 "With the return of Mom, we get into the mythology of our show, and then we get into what happened with Mom and the mysteries that surround her, as well as the organization that she has been a part of, the Volkoff Industries, which is our Big Bad this season," said Fedak.

"And we have some really exciting stuff coming up. We have Timothy Dalton joining the show. He plays Gregory Tuttle, he works for MI6, but he is a handler, not a spy. He's read all the manuals and how-to books, but he's not a field agent."

So does that mean Chuck gets to teach him to be a spy? "There's a little bit of him watching Chuck in action and being impressed. And also, for Timothy, it's like Timothy is not only a great action hero, he also is a really, really funny actor, and to watch him play Tuttle is just fantastic. I think [co-creator] Josh [Schwartz] and I are so excited by the Tuttle character. We first see Tuttle in episode seven this season, which is Chuck Versus The First Fight," he said.

However, the biggest news for Chuck viewers is that "one of our most exciting" Gretas will be played by Summer Glau (Firefly, Terminator: The Sarah Connor Chronicles).

"My geek, my inner geek, which is also, for myself, my outer geek, was very excited that we were able to get Summer to do the show. She's not only great and scary as our Greta, but she's also quite funny," said Fedak. "We're trying to see just how much Hollywood we can get to wear the Buy More green or the Nerd Herd white and black."

There's also one other pressing storyline the producers must address—the pregnancy of Chuck's sister, Ellie. With a little Ellie and Captain Awesome (aka Devon) Woodcomb baby on board, when can we expect to see the family get bigger?

"I would say that Ellie will have her baby most likely by episode 13," said Fedak. "We're still breaking that episode right now, but we're really excited to actually have [a birth on our show]. ... It's the Chuck show, and so we're trying to figure out how exactly we can make that big and funny, and also have it in the spy component."