Battle as Gandalf, Saruman and more in Lord of the Rings: Conquest

Tag: Gandalf
Tag: The Lord of the Rings

War has come to Middle-earth. Again. Lord of the Rings: Conquest presents you with the chance to once more hack and slash your way through the trilogy's signature battles, then launch a counter-invasion of Middle-earth as the avatar of a resurgent Sauron.

You play as a warrior, archer, scout or wizard, viewing the field from a third-person, over-the-shoulder perspective as you execute your enemies with signature moves and power combos. The latter of these can make the game feel like the misbegotten spawn of Mortal Kombat, but fortunately they can largely be ignored in favor of straightforward button mashing.

Available for Windows, PlayStation 3 and Xbox 360, Conquest offers the expected capture-the-ring, territories and team deathmatch multiplayer modes, with support for up to 16 players. There are two solo campaigns: a Good one in which players battle Sauron's forces, and an Evil one in which the Dark Lord recovers the One Ring and uses it to conquer Middle-earth.

Both offer the chance to fight as Aragorn, Gandalf, Legolas, the Witch-King, Saruman and other champions; in multiplayer and co-op modes, the player who scores the most points wins the right to play such signature characters. 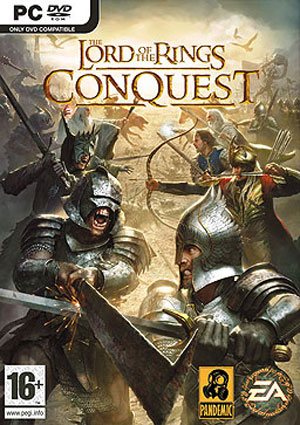 Conquest brings an arcade-style frenzy to the Lord of the Rings franchise. Wizards shoot lightning bolts, knock down enemies with shock waves and summon walls of fire. Warriors wield flaming swords, allowing them to create whirlwinds of flame and shroud themselves in fire while charging enemies. Elves shoot fire arrows, scouts blow up enemies with explosives. The overall effect is jarring when compared to the low-magic feel of the trilogy, but the game's real problems lie deeper.

Conquest's game play is overly linear, ignoring tactical play in favor of repetitive swarm assaults. The infuriating combat system repeatedly drives heroes to their knees or throws them across the battlefield, which is rage-inducing in timed conquest events and pitched multiplayer battles. Some will find it a decent mid-winter distraction, but most will likely want to wait for Halo Wars to get their strategy-gaming fix.