Valley plays Christopher Chance, a private bodyguard whose clients count on him to handle extreme situations. He's already parachuted out of a bullet train, flipped a plane upside down, jumped motorcycles, fought bad guys and done the sort of hero stuff usually reserved for big-budget movies.

Valley took part in a conference call with reporters on Monday to preview the rest of the show's initial season. Human Target airs Wednesdays at 8 p.m. on Fox.

Find out who Chance loved and left this week

In tonight's episode, "Salvage & Reclamation," Chance goes to South America for a rescue mission. A single phone call from Maria (Leonor Varela) convinces Chance to rescue her friend from a military base. "He goes back to visit one of his old flames because he's got a case, someone he has to protect and some things they have to find," Valley said. "That episode is a little more of a kind of stand-alone episode. It does give you a glimpse into Chance's past, into his past with this particular woman. You get an idea of what his previous jobs might have been, but it's more of a stand-alone episode than something that ties all the rest of the characters together historically."

Think there's no bad guy too tough for Christopher Chance? Well, in the upcoming episode "Baptiste," Chance may have met his match. "The next episode, 'Baptiste,' is going to explain a little bit more about Chance's past," Valley said. "It's a very intense episode. Lenny James from Jericho has come on to play Baptiste, who used to work together with Chance at one time, and they've become kind of arch-nemeses. Baptiste is the most talented assassin who's still out there working for hire. He and Chance come to blows."

Emma Barnes is back, too

Remember feisty FBI agent Emma Barnes (Emmanuelle Vaugier) from the episode "Embassy Row"? It turns out she got suspended for two weeks after Chance disappeared from the scene. She returns to help him fight Baptiste, but not totally willingly. "She comes back and they sort of figure out a way to convince her, to enlist her to help them," Valley said. "That's actually a pretty funny scene." 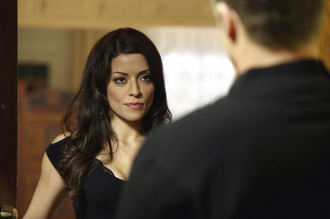 It sounds like each week will bring a new beauty into Chance's action-packed life. OK, that's pretty standard for episodic television, but these are all ladies we love from shows like Dollhouse, Battlestar Galactica and Journeyman. "Just this litany of beautiful, talented women have come on the show," Valley said. "Amy Acker is in the finale. She plays this really pivotal character in Chance's life. Grace Park is in an episode called 'Cornerman.' Moon Bloodgood is showing up. Also Autumn Reeser comes back as well. She sort of has a recurring role on our show. She was in the show about the building that blew up, the kind of Die Hard-esque episode. She's coming back to help us out."

All is revealed in the season finale—sort of

Each episode hints at secret tidbits of Chance's past, even bringing in characters like Baptiste who knew him earlier. It all pays off in the season finale. "In the season finale, Baptiste comes back," Valley said. "Amy Acker shows up and plays this one character who was very pivotal in Chance's past in that she was sort of the catalyst for his ultimate change into becoming Christopher Chance. Lee Majors is in that episode. Armand Assante plays Chance's old boss. Chance is talking about 'Oh, you never met my old boss,' so I finally met my old boss, which was fascinating. Yeah, there're a couple of major confrontations there."

You won't believe who Guerrero fights

Jackie Earle Haley has been totally badass as Chance's mysterious ally Guerrero. The season finale will show him in action, too, and the one he's fighting is Chance himself! "I think what's fun is Jackie Earle Haley and I have our first fight, even though it takes place in the past, but you can see the roots of their relationship and why they have such a kind of trusting bond as well," Valley said. "Chance decides not to ... I don't want to spoil anything, but there's a real important flashback to a scene between Chance and Guerrero where they're fighting each other to the death, almost. You find out a lot about their past and their relationship. That scene ended up being much more intense, but moving as well, than I imagined it to be."