Battlestar's Grace Park reveals her part in The Plan

"What we did was we took scenes that we already shot, that you're going to recognize, and then either add another angle, or add some dialogue," Park said in an exclusive interview last Thursday in Pasadena, Calif. "So if someone whispered something in someone's ear, which you never heard, we're actually adding that dialogue. So it's going to inform things on so many different levels. So it's tricky."

The events in The Plan take place between seasons one and two of Battlestar Galactica. Park spoke exclusively to SCI FI Wire about The Plan and the forthcoming prequel series Caprica at the ongoing charity auction in which paraphernalia and props are on sale. The following is an edited version of that interview. The two-hour pilot of Caprica is now available on DVD and the Web; Caprica kicks off on SCI FI next year. Battlestar Galactica: The Plan is due in November.

Are there aspects of your characters you would like to explore in Caprica if given the chance?

Park: That's a good point. There's a lot still to be mined in these characters in the parts preceding the attack. Perhaps we get a little into that in The Plan, but there is so much there, and reading the [series] bible and talking to [executive producer] Ron Moore, I've always made it enough that I knew what their background was. But if we were ever to have an episode with that, I would have jumped at the chance to do it. It would be really, really wonderful.

Lately people have asked, "If there's a big feature movie, would you do it?" It's always, like, there's not going to be a movie, or if there is, we're not going to do it. But what is funny is that when we finished the show and we had to do a few pickup shots a couple of months later, a few of the people who were coming back said it's like seeing an ex-girlfriend all over again. It's like all of the stuff that you thought was buried and gone kind of comes back, and you love it, and it hurts. I'd really have to think about that, but if the story was there and the people were there, I would do it again. But before I always thought, no.

How tough was it to go back and take away some of the experiences your characters accumulated during the series when you came back for The Plan? 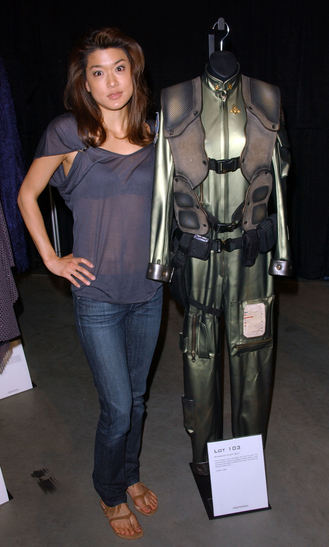 Park at a charity auction of props (Albert Ortega)

Park: It was kind of confusing, because I already had prepped before that. Because when we shot "Someone to Watch Over Me," maybe the third-to-last episode, we already had all of these flashbacks; well, not necessarily flashbacks, but we had to go back into who Boomer was back when she was with chief and she had to fabricate their whole home all over again and how much of that true and how much of it was made up. I think the feelings were definitely there, but that was an interesting part, because I wanted it to still be Boomer who we all knew from the very beginning, but Boomer with all of those layers on top of her of heartache and hardship and isolation and confusion. So that was already kind of weird.

So The Plan was almost like the flip side: Let's [go] back to the beginning without any of those layers, but now knowing where she is going to go. The important thing was I always wanted to differentiate Boomer from Athena, and doing some of the flashbacks in "Daybreak," when Tigh and Adama are saying, "You're washed up," we all know who Boomer is now, but having to go back and remember that she wasn't always that way and to kind of go back to her innocence. Her at the beginning was different than Athena at the beginning; Athena was way more knowing, and she was, like, lying right off the top, because she didn't care.

Did your own preparation for these characters conflict with what they came up with or retrofitted onto the mythology of Battlestar?

Park: What was more confusing in The Plan, because whenever they go back they always want to make something kind of interesting, and put a new piece there ... Oh, I almost said it out loud! They had this little piece that was a little prop which would [help] you sort of [see] the mechanism how Boomer went in and out of her sleeper [mode], and since it was never discussed before or revealed to us, I had my own thing all made up, and then when that started happening, that's when it really screwed it up. It's like Back to the Future, like, Marty McFly went back, and then he started messing with the past, and I was like, "Isn't that going to have repercussions?" I think that was more confusing, to make that make sense after all of the stuff that I put on top already.