Becoming a giant green alien in John Carter of Mars

Polly Walker, who will soon co-star in Syfy's upcoming Caprica, will also appear in the live-action film adaptation of Edgar Rice Burroughs' John Carter of Mars series, and she let us in on her preparations for the role of a four-armed giant green Martian "Thark."

Chosen One of the Day: Woola the space dog from John Carter
Why did John Carter tank? Baffled Willem Dafoe has his own theory

Walker plays the character Sarkoja in the movie, which marks the live-action debut of WALL-E and Finding Nemo director Andrew Stanton. The book is based on Burroughs' series of 11 books in which Civil War veteran John Carter is beamed to Mars—called Barsoom by its inhabitants—and finds himself caught up in a conflict between the green Martians, called Tharks, and the humanoid red Martians. In the books, Sarkoja is 900 years old.

"It's going to be amazing," Walker said. "I'm like a 9-and-a-half-foot green alien. She's sort of the queen bee of the tribe, and she's incredibly tough."

Walker expects that part of Thark boot camp will involve learning the technical process that will transform her into Sarkoja. "I think, apart from Thark camp, I have to go be stilt-walking and things like that," Walker said. "So it's a physical process." 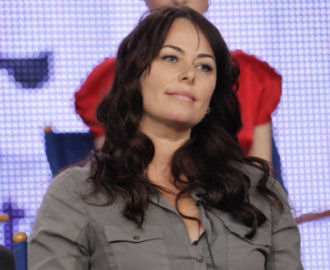 So far, Walker has not read any of the John Carter books yet, but she plans to before filming. "To be honest, I've not had an opportunity, just because I've been so entrenched in [Caprica], but I'm going to do my homework when I go over there, because it's iconic, isn't it?"

The British actor may also have to modify her voice to play a Thark. "I don't know what my Thark accent is yet. I'm going to work on that. I think there is going to be an accent there."

John Carter of Mars is due in theaters in 2012.