Chris Evans is making a career out of comic books: After breaking out as Johnny Storm in two Fantastic Four movies, the actor voiced Casey Jones in 2007's TMNT, played a "pusher" in Push (technically not based on a comic, but became one later), and will be seen in two graphic novel adaptations in 2010—as one of the seven evil boyfriends in Scott Pilgrim vs. the World and as a member of the ragtag special forces group in The Losers.

That doesn't include his biggest part yet: Captain America.

"It's such a broad category, you know what I mean?" Evans told a group of reporters visiting the set of The Losers last September in Puerto Rico. "That's like saying if you've done one drama you don't want to do another drama. All the comic-book movies I've done have been so radically different. You can find them all in the comic-book store, but they're all different families."

"I look at as a movie," adds Evans. "Who's the director? Who's the producer? Who's the cast? That's all that matters. If it came from a comic book, so be it."

In Losers, Evans plays a computer hacker named Jensen, who the actor describes as a colorful character who should be instantly familiar to fans of Andy Diggle and Jock's work on the graphic novel. "If you've seen the comic book, Jensen is pretty crazy," says Evans. "He has such a specific look in the comic book. I think if you put anyone in the right sideburns, facial hair and Lennon glasses, you know, he'll look like Jensen. He usually wears very bright colors and Hawaiian shirts, and he has the bleach-blond hair and this ridiculous facial hair that I have, and he's definitely a little more wild. He's usually in ridiculous reds and pinks and greens and oranges and things like that. It's fun."

The character gives Evans a chance to try his hands at comic relief before he becomes the no-nonsense, patriotic Avenger. "[Jensen]'s the goofy one," says Evans. "He doesn't take things too seriously. He's the one that kind of loves life, and he's always looking for a joke, so they give him a decent amount of jokes." 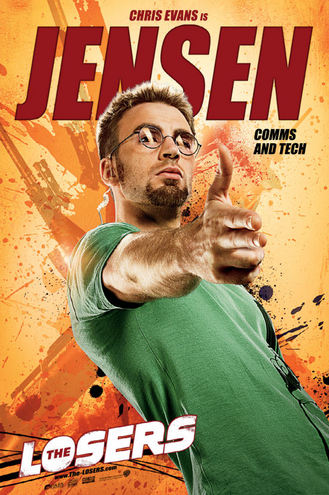 The most demanding aspect of portraying Jensen for Evans was trying to look as if he knew what he was doing with all the character's technical gadgetry. "I know d--k about computers," admits the actor. "I think I pull it off. But the props they give me [are] not just a simple laptop. It's really hi-tech computer stuff. These, I don't even know what they're called, just kind of like hand-held screens with these little pencils and touch-screens and really advanced s--t. I'm just clunking around like I know what I'm doing."

If Losers is a success, Evans said he'll be up for returning to the character, though he did not sign a multi-picture deal, as he did on Fantastic Four and Cap. "The problem is they only make [a sequel] if it makes money, and that it is good and makes money are not [always] synonymous. Even if it's a fantastic movie, even if you can't wait to make the sequel, it's just always better, in any respect, in any aspect of life, to not be forced to have to do something."

The Losers opens in theaters nationwide on April 23.