Curious about Being Human UK's upcoming new season-five big bad villain? So are we. And we have a name: Captain Hatch. So, what about him?

Our curiosity has been aroused, and thankfully creator Toby Whithouse and Captain Hatch himself, actor Phil Davis (Whitechapel, Sherlock's cabbie killer in season one's "A Study in Pink"), are here to tease us about the new villain that will make life miserable for our new triumvirate of heroes (werewolf Tom, played by Michael Socha, ghost Alex, played by Kate Bracken, and vampire Hal, played by Damien Molony) .

In an interview found in the most recent issue of SFX magazine (out in the UK now), Whithouse reveals that he had trouble finding Hatch's "voice" until he thought about Davis, with whom he'd worked with in 2007's sitcom pilot Other People.

So what about Hatch? Phil Davis teases:

"It's like slipping into a pair of shoes. Sometimes they fit immediately, and sometimes you have to wiggle your toes a bit. But this was pretty easy to get the hang of. It was irresistible, because it's so well-written. He's very clever and very funny. He kills people with a smile on his face — or persuades them to kill themselves. I want the audience to enjoy his evil and be scared of him at the same time. I want them to be laughing and then stopping dead."

"It's a brilliant performance. Imbued with such presence and danger, and that effortless evil that Phil does so well. I wrote it, but I'm genuinely chilled by some of the stuff he does. And he's not afraid of making himself look ghastly. Hatch goes through a transformation as we get towards the end, but up until that point Phil was happy to make himself look utterly rancid!"

It seems that our first introduction to Hatch will have him rotting away in a filthy room and that the character will be in a dreadful state, which raises the question: What supernatural creature is Captain Hatch? Is he a vampire, a zombie? Or is he something else entirely? Davis and Whithouse don't say. Adds Davis:

"I'm one of those rare actors who comes out of make-up looking far worse than when he went in! They blacken my teeth, paint veins on my forehead and put earwax dripping out of my ears — it's a pretty disgusting sight. He's described as 'a little angry fist of a man' to start with, but as he gets more powerful, he becomes more relaxed and urbane. " 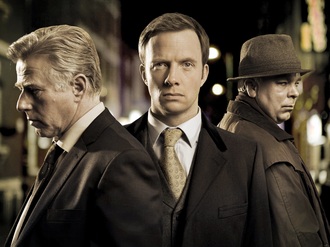 (Phil Davis on the left, and the cast of Whitechapel)

We don't know about you, but Captain Hatch sounds both intriguing and disgusting, and we simply can't wait to see him. How about you? Are you intrigued by Captain Hatch? And are you looking forward to a fifth season of Being Human UK?