Being Human vamp says he could OWN those Vampire Diaries bloodsuckers

As the centuries-old vampire Aidan on Syfy's Being Human, Sam Witwer has really got a taste for blood. So much so that the actor thinks his character could take on another centuries-old famous TV vampire, The Vampire Diaries' Damon Salvatore.

Though Witwer's never really heard of Damon Salvatore (Ian Somerhalder) before (yes, we can hear the collective gasp of many a female fan right now), Sam Witwer believes his character would "definitely win" in a fanged face-to-face confrontation with the popular Vampire Diaries bloodsucker.

Of his character, Witwer says, "The goal is for [Aidan] to have a healthy, normal relationship with a person. But is he ready for that yet? We'll see as the season progresses. Mistakes are made, accidents happen. It's nasty business."

Little known to Witwer, Damon Salvatore (below) also has his demons concerning his fragile relationship with humanity—with the exception that Damon doesn't WANT to feel human. He's forged relationships with people from Mystic Falls a bit against his better judgment and was made to feel that way because of his love for Elena Gilbert (Nina Dobrev). (Seriously, wasn't life easier when vampires simply lost their souls on Buffy and Angel?) 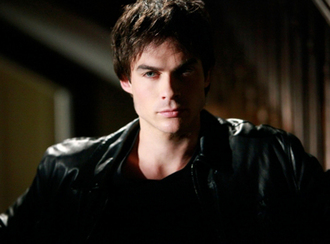 But what do YOU think? Who do you believe would win in a fanged showdown? Being Human's Aidan or The Vampire Diaries' Damon?