With just two episodes of NBC's Chuck left in its original 13-episode third-season order, the Is-Chuck-a-spy-or-isn't-he-a-spy arc is near its end, said executive producer and co-creator Chris Fedak.

Now, mind you, that doesn't mean the end of Chuck's third season: NBC has ordered an additional six episodes. "We have episode 13, which was originally designed as our season finale, and like with most television shows, we have a super, epic, game-changing episode 13 this season that essentially changes the show in a really special way." After that, Fedak promises the final six episodes of the third season will be "almost like a new show."

What changes—and what doesn't—in Chuck
'Like a new show': Our preview of Chuck season 3.2

Last Monday, in episode 11's "Chuck vs. the Final Exam," Chuck (Zachary Levi) was supposed to kill someone. He couldn't, but Casey (Adam Baldwin) did it for him, leaving Sarah (Yvonne Strahovski) and the rest of the spy gang to conclude that "Chuck's a spy."

It's been an interesting arc for Australian actress Strahovski's Sarah, who as a character hasn't been at all happy about the development of Chuck's impending spydom. "I think it is the fact that Chuck is becoming more of a spy, and I think, for Sarah, she's becoming more of a human being and learning how to be sort of ... somewhat normal," said Strahovski, sounding very non-Sarah-like with her Aussie accent in full bloom. "And it is kind of baby steps for her, because she's always been in the spy world. She doesn't know it, but I think she's sort of unraveling a little bit more this season, and we'll definitely see more of that in episodes to come. You get to see her more raw side."

"We originally designed this season to be ... about not only the spy world, but [also] the Sarah/Chuck relationship and how that relationship folds into the spy world," said Fedak. "That will all make a lot more sense once people see what we were doing in total with episode 13. We have some super, huge, dramatic things coming your way. ... For us, these first 13 episodes are all about the boy becoming a man."

Of course, "the boy becoming a man" will continue to find challenges as everyone around him continues to be affected by Chuck's spy life. Two characters—his brother-in-law, "Captain Awesome" (Ryan McPartlin), and his best friend, Morgan (Joshua Gomez)—now know the truth. 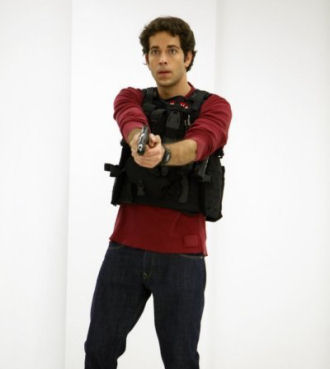 According to Strahovski, Chuck's spy life will continue to invade the lives of the people he cares about. "It is those little things we keep finding about the characters and the family and how it's kind of getting dangerously close to the family," she said. "Like Chuck's secret is creeping in on that family life of his. So there [are] definitely surprises coming up."

Fedak likens Chuck's journey to that of Superman. "It is one of those situations where it is the hero's choice. It is like Clark Kent could be just a reporter who has fallen in love with Lois Lane, and they could have a life together. There's nothing stopping him from doing that but the call to be a hero. For Chuck, we've realized from last season that he feels that call in the sense that this is the family business. He father was a great man. He feels like he can actually make a difference in the world, like he can actually change the world, and so that's put him, like, in a natural collision course with all people who have, like, these heroic intentions with their personal life, with the things that just everybody wants out in the regular world," said Fedak.

The executive producer said with Chuck "at a crossroads," it will lead to "a couple of really epic episodes coming up" as the mini-season, or season 3.1, concludes.

As for guest stars, you can look for the return of Chuck's dad, played by Scott Bakula, and we'll also meet Chuck's therapist in episode 16, who'll be played by Back to the Future's Christopher Lloyd.