We caught up with new Emmy winner Joss Whedon on Monday night at a party for Fox's upcoming fall season, and he gave us the exclusive scoop on a possible Dr. Horrible sequel, the new season of Dollhouse and his upcoming horror movie Cabin in the Woods.

Over the summer, SCI FI Wire reported that Kevin Reilly, president of entertainment for the Fox network, said he would leave Whedon alone after Dollhouse's rocky first season. It turns out stand-alone episodes did not make the show more accessible, and once Whedon started exploring the story, the fans clamored for more. (Possible spoilers ahead!)

More Cabin in the Woods

In the second-season premiere, Whedon furthers the mythology of Echo (Eliza Dushku) and the Dollhouse by showing her cycle through different imprints over the course of an engagement. In the climax, Paul Ballard (Tahmoh Penikett) hits Echo to trigger an imprint that will give her the fighting skills to escape a desperate situation. Later this season, Whedon regulars Alexis Denisof and Summer Glau will join the cast.

Congratulations on your Emmy win for Dr. Horrible.

Whedon: Thank you very much.

Does this affect anything for getting a sequel going?

Last we talked, you were considering doing the sequel as a feature film. Does becoming "The Emmy-winning Dr. Horrible" change things?

Whedon: Well, the Emmy-winning Dr. Horrible was never on TV. If we were on TV, maybe we would've won an Oscar. If we're in theaters, we can win a Tony. It's very confusing. We don't understand. 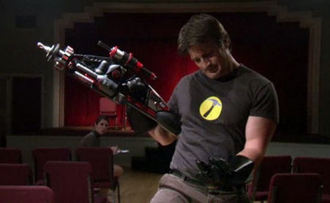 Is all forgiven for the "Once More With Feeling" snub [the musical episode of Whedon's Buffy the Vampire Slayer]?

Whedon: You know, I didn't realize that was a snub. Awards are what they are. It's extraordinary to have won it, and we're very grateful, but it's not like we were trolling for it.

How does it feel to be left alone on Dollhouse?

Whedon: I'm afraid and I want Kevin to come back and hold me. The fact is, we definitely feel more centered about what we're doing. That doesn't mean that we're doing it completely in a vacuum. We still get notes, and sometimes they're enormously helpful, because that's what a collaboration is supposed to be like. The problem with last year was there was a question about what the show was. That doesn't exist anymore.

Now we go episode by episode, but what are we trying to accomplish? So it's still a collaboration, but in terms of "Oh, let's try and mold this show to what we thought it was going to be," that's over. So in that sense, yes, they have left us alone. 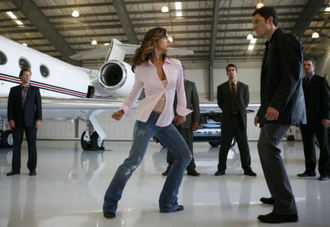 Did you have reservations about doing a scene where Paul really hits Echo?

Whedon: Well, I didn't really have reservations about it, because it very quickly becomes clear that he hits her in order that she can beat the thundering s--t out of him and everybody else in the room. He's basically igniting a bomb, so it's shocking and sort of awful, but then when you see why he's doing it, there is that moment, which is my favorite, as she comes at him where he just sort of goes [makes the "bring it on" gesture], "Do it, take me, give me what I deserve."

What kind of character does Alexis Denisof play for you this time?

Whedon: Alexis is a politician who is actually sniffing around Rossum [the corporation that runs the Dollhouse], and so he's definitely more suave than Wesley was in his early incarnation. Right now he's an earnest guy trying to do the right thing, but he's coming up against the Dollhouse, and we know how well that went for Paul Ballard.

When will we see Summer Glau?

Whedon: She will not be terminating, nor will she have a trigger that turns her into a living weapon a la River, or Mellie. Knowing it was going to be Summer, or hoping it was going to be Summer, I wanted to do something that was different and plays to her strengths, but at the same time is a different character and kind of lovely. There'll be a little romance involved as well.

How is post going on Cabin in the Woods?

Whedon: Really well. Cabin's coming along. [Director] Drew [Goddard] and I are getting very excited.

What might you show for a trailer when the whole thing is so secretive?

Whedon: We're talking about what they're going to show, and they'll start giving up some information to get people into the theaters. We're working on that now; should be soon.

Whedon: I wish I could say something about Goners. Universal, release Goners into the wild so it can be free again.